1984 Anti-Sikh Riots: Victory To The Mob | By Khushwant Singh

The Nanavati report is utter garbage. All the killers are roaming freely. 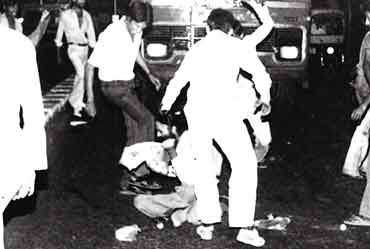 I have only two words for Justice G.T. Nanavati's inquiry report on the butchery of Sikhs 21 years ago: utter garbage. I have the report in hand, all 349 pages, plus the Action Taken Report presented by Prime Minister Manmohan Singh's government in Parliament on August 8. I thought it would take a whole day or two to go through it. It took only a couple of hours because it is largely based on what transpired in zones of different police stations and long lists of names which meant nothing to me. There are broad hints about the involvement of Congress leaders like H.K.L. Bhagat, Jagdish Tytler, Dharam Dass Shastri and Sajjan Kumar. He gives them the benefit of the doubt and suggests yet another inquiry commission to look into the charges against them. Yet another commission? For God's sake, is he serious? To say the least, I was deeply disappointed with the whole thing. But the game of shirking responsibility was to attain higher levels!

First, the government took its own sweet time to put the report on the table of the House, waiting till the last day allotted to it for doing so. Union home minister Shivraj Patil had assured the House when the report had been submitted to him six months ago that the government had nothing to hide. However, he hid it till he could hide it no more. That shows the government's mala fide intent in the whole business. Even the Action Taken Report makes sorry reading. Most of it is aimed at the policemen now retired from service and hence no longer liable for disciplinary action. Any wonder why, despite monetary compensation, the sense of outrage among families of victims has not diminished by the passage of years.