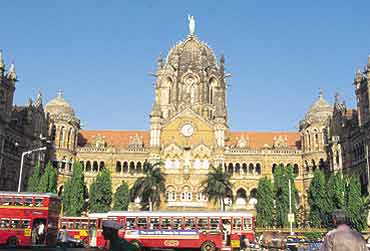 outlookindia.com
-0001-11-30T00:00:00+0553
Never invade us for we will strike back after you are dead. Defeat us and build your manly grandeur on our soil, we will cheerfully wake up at the stroke of midnight and charge entry fees on your monuments, our urchins will urinate on your colonial walls and we will let pigs float in the backyards of the tombs to your departed ladies.

The misled warriors who left their colossi on this soil live on in sheepish immortality. But a consulting architect named Frederick William Stevens is a fortunate dead man. One hundred and sixteen years ago, he built one of the most spectacular railway stations in the world, the Victoria Terminus. In return, we gave him malaria and buried him in a cemetery just five kilometres from the station. Then, eight years ago, in what a writer calls the "biggest sex-change operation in history", Victoria became Chhatrapati Shivaji Terminus. And now, the inheriting natives have brought this transvestite creation the prestigious status of a world heritage site. A few days ago, UNESCO, as per the norm that comes with the no-money honour, dedicated the building to all of mankind.

A significant portion of mankind has always used the site even before the dedication. It is the strangest among the nearly eight hundred such grand sites chosen from all over the world, for it is the only functional office building to receive the honour. More than 1,200 railway officials sit in a building designed for 650. Though the platforms inextricably attached to the main office block are not part of the heritage site (due to technical reasons), the three million people—or half the population of Israel—who pass through them every working day in an oddly silent yet near-frenetic procession are the real users of the terminus.

Theirs is a world of dank tenements in distant, unlovely townships like Dombivli. A world vastly different from the tea-and-cucumber-sandwiches leisure afforded to several keepers of the city’s heritage. When Outlook spoke to them at the doorstep of the world heritage site during the morning rush, many were unaware of the status, some thought the honour didn’t make any difference to their lives, and others felt proud. But nothing mattered as much as their hurry to make the transport connection work.

Over one hundred and fifty years after the first train in India left from Bombay to Thana, a return trip down what is called the central line during the morning peak hours is only for the strong-willed. Nine-coach suburban trains made for 1,700 passengers run with over 4,700, about 15 of them crammed into every square metre. In theory, these are somewhat more impoverished commuters than those who take the western line; the girls certainly are less pretty for the central line does not pass through Bandra.

When the great hordes of commuters reach Chhatrapati Shivaji Terminus, they have no time to gape at its majestic ceiling or wonder at how Stevens had drawn all the sketches of the station in his own hand or how he was rewarded Rs 5,000 by the Great Indian Peninsula Railway, an enormous amount then considering that the terminus itself cost just Rs 16 lakh. They may not know that the raging rush-hour hell of the station was once a public hanging ground where spectators threw shoes and rotten eggs at condemned men.

All that the marching workers know for sure is that they must rush to the nearest door and wait in a line that is usually over 50 metres long to catch a connecting bus. Inside, ticket checker Kamble shrugs when asked for his reaction to working in a world heritage site. "What’s changed?" He asks and then in a disjointed musing about the world, "The fine is now increased to Rs 250 (for ticketless travel). Who can pay it?"

By the time he returns to work next morning, 48 migrant families would have reached the station from various corners of the country in search of jobs and they would merge with the rest of the homeless in the backlanes of the city.

Heritage status may not change the lives of the commuters but it might bring reason to the madness around the terminus. "There will be decongestion and approach-road traffic management," says Rajesh Agarwal, an expert consultant with UNESCO who was involved in the long journey towards the honour.

Future construction in the area will be monitored. Buildings that are over 18 metres tall or aesthetically disturbing may not be permitted. Hoardings have already vanished. Across the road from the terminus is a theatre that is showing Shikari with a huge poster of a man, presumably the hunter, placing his hands inquiringly on a woman’s breasts. Such hoardings will go, conservationists say. People with the sensibilities of Sharada Dwivedi, urban historian and co-author of Bombay: The Cities Within, hate the new subway that has been built in front of the station, its plastic shades often described disdainfully as "caterpillars". There is pressure to change the design of the subway that gapes foolishly at the elegant terminus. The subway was built at a cost of Rs 15 crore which is what is allocated for the conservation of the terminus. For once, a heritage site in Bombay will not go begging at the doorsteps of the Tatas and other corporate philanthropists. Central railway racks up over Rs 5,500 crore on expenditure, so Rs 15 crore is "affordable" in the underplayed analysis of an official.

The heritage status is expected to alter the way railway employees use their office. "We may not be able to drive a nail into the wall whenever we want to," says Sunil Jain, the spokesman of central railways. But Rajesh Agarwal believes UNESCO will be practical though its conservation guidelines are usually very stringent. "Let’s admit it, the Chhatrapati Shivaji Terminus is a government office building. We may not be able to stop someone driving a nail or sticking a calendar on the wall. The concentration will be on the conservation of the whole structure." Alterations that were done to the building will be returned to the original form. The huge cylindrical water tank that has come to rest on the terrace will go. Paan-spitting will be hilariously banned in vain. For the next two years, the external surface area of 50,000 sq feet will be coated with silica. Indians are going to take care of what was once the great Victoria Terminus.

It is true, Frederick Stevens is a lucky man. And even the road that was named after him has not been renamed.

(Sharada Dwivedi contributed many of the historical details.)

HIV And The Hive Of Security