Before the big battle, inner skirmishes reshape the big players 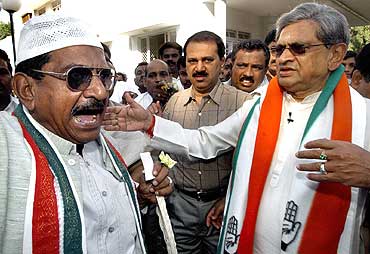 Before the ticket allotment drama shifted to Delhi last week, the Congress party in Karnataka held marathon meetings to shortlist candidates for the 224 assembly constituencies going to the polls next month. Senior central leaders and local bigwigs argued ceaselessly, trying to put together a list of 'winnable' candidates. But one person conspicuous by his minimal involvement (at times even by his absence) was the man the high command had specifically dispatched to Karnataka, S.M. Krishna. One top Congress leader told Outlook: "I was watching Krishna for two days. The first day he came in and stayed for about 30 minutes... when we spent more than 10 hours discussing tickets. The next day he didn't even put in an appearance."

What went wrong? What happened to all the hype surrounding Krishna's re-entry into state politics? There was much expectation that he would contest the polls either from Maddur in Mandya district or from one of the many Bangalore constituencies. That hasn't happened. The last day for filing nominations for these constituencies was April 23. 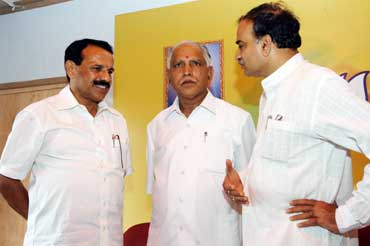 If the Krishna-in-Karnataka plan has not panned out for the Congress, all is not well in the BJP camp either. Party insiders worry about the growing differences between senior leaders B.S. Yediyurappa and H.N. Ananth Kumar. Yediyurappa has kept control of the seat allotment process and, like Krishna in the Congress, Ananth Kumar looks a little lost in the process. The Bellary lobby, the Yediyurappa lobby and the Ananth Kumar lobby seem to be pulling in three different directions. But the party has a positive spin for this. Ganesh Karnik, MLC, says, "There are more people eager to contest on a BJP ticket now...they see us coming to power this time."

With a three-phase election, from May 10-22, no one is making pointed predictions. But across party lines, the threat of a hung verdict looms large. Reason: too many claimants for the 'secular vote' and too little depth in the BJP (vis-a-vis winnable candidates in all seats). The latter, in fact, has so far announced only 171 candidates. There are rumours that the bsp may swing with the BJP in some seats. As far as the 'secular vote' is concerned, there is the sp, JD(S) and also the bsp to compete with the Congress. It is reliably learnt that the JD(S) is focusing on about 60 seats and is 'confident' of getting 30. The Congress wants to consolidate the 'secular vote' by tying up with the SP, but its Karnataka leader S. Bangarappa is as temperamental as ever.

As of now, the state Congress is firmly in the grip of PCC president Mallikarjuna Kharge, and to an extent ex-CM Dharam Singh. In the tickets distributed so far too, their influence is evident. The talk these days is that if the party secures a simple majority, then it's Kharge who will be CM and not Krishna. In the event of a hung assembly, the only leader who appears acceptable is Dharam Singh.

Ex-deputy CM and Kuruba leader Siddaramaiah also appears prominent though for some he's only focused on getting tickets to people who crossed over with him from the JD(S). The Congress expects Siddaramaiah to deliver the Kuruba votes, the third largest community in the state, and also influence the other backward classes. The high command perhaps thought that Krishna would get the middle-class urban votes as well as arrest the slide in the Vokkaliga-dominant old Mysore region. 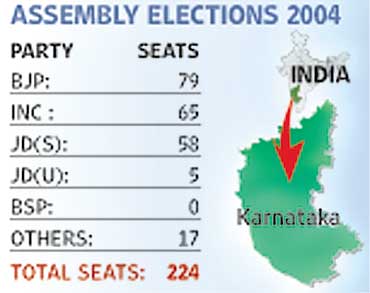 But there has been so much of dissension in the region that the BJP, which never had a big presence here till now, has been able to woo away Congress rebels. A case in point is Madhu Gowda, son of Made Gowda, ex-Congress MP from Mandya. He's now contesting the Maddur seat, Krishna's former constituency, on a BJP ticket. "If Krishna had a decisive role, he'd have ensured the Congress did not mess up with the ticket distribution on his home turf," feel party workers.

Krishna's low profile is also explained in two other ways. A former legislator says: "There may be a fear in the party that if Krishna is projected over Kharge, the Dalit votes may drift to the BSP." The other argument is that since there is a perception that it'll be a hung verdict, projecting Krishna as CM is a futile exercise since he would anyway not be acceptable to a coalition partner—which by default is assumed to be the JD(S).

But Krishna loyalists feel it's a little far-fetched to say that Dalit votes will slide if Kharge is not given prominence. They point out that the BSP is in the fray in all 224 constituencies, so the Dalit vote will get split anyway. "Also, the Dalit vote is not homogeneous, the BSP is likely to attract the votes of the Madiga community among SCs, who were traditionally with the Congress." The Congress does not have any prominent Madiga leader.

Although campaigning will be frenetic in the next few weeks, many leaders are also gearing up for what will be hectic post-poll activity. If the outcome is a hung house, then both the BJP and the Congress will have to woo Deve Gowda. Will it then be a repeat of 2004? The humble farmer has already declared that "no national party can come to power without JD(S) support".

Have You The Eyes For It?