The Vaiko episode in the SC may bust POTA clause, shake up political alignments 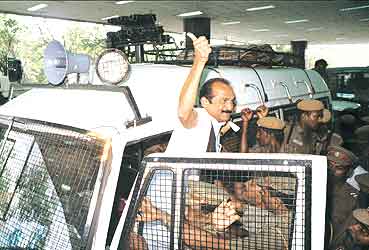 "If a child stabs the mother with a kitchen knife, the father will disarm the child."
—M. Karunanidhi on the use of POTA against Vaiko

The DMK chief had expected some fatherly intervention from the Centre. It came, but not before giving the southern NDA allies some anxious moments. Even as Karunanidhi was demanding the release of his "brother"—former party colleague and MDMK chief Vaiko—at a day-long fast in Chennai on March 29, the Union government did the unexpected. It submitted an affidavit in the Supreme Court stating that Vaiko's speech at a public meeting near Madurai in June last year did indeed constitute an "act of terrorism" under Section 21 of the Prevention of Terrorism Act (POTA).

Later, of course, realising the faux pas, it did a turnaround. The Centre retracted its original statement and filed an additional affidavit. In it was the official clarification—that Vaiko's speech did not attract any provisions of POTA. A red-faced attorney general, Soli Sorabjee, blamed his juniors for the gaffe, claiming that a few sentences had crept in...