He goes by the unlikely name of Mathrubhootham, but this Tamil telly sex evangelist is second only to superstar Rajni on the pop chart 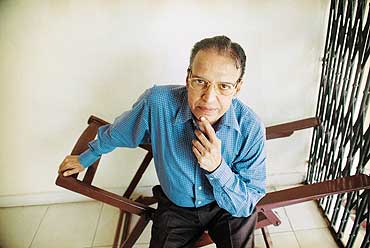 Q: Respected Sir, I get turned on by women's nostrils. When I see a woman's flared nostril, I have an uncontrollable urge to place my member in it. What shall I do?
A:Dear Viewer, you seem to have proved the saying, "On the whole, it's all about a hole." Nevertheless this seems to be less your problem than your partner's who obviously needs to possess cannon holes for nostrils to satisfy you.

DON'T squirm, folks. This is how this television show rolls—and it's one of the most popular in southern India. And the cynosure of all eyes is

Back at PP's spartan set in a Chennai studio, you just find a couple of scratchy vinyl chairs and two people. Seated on one of those chairs is a fiftyish gent, wearing specs and a slight lisp. He is dressed in unobtrusive clothes and if you saw him on the street, you wouldn't give him the time of the day. Seated on the other chair is an unremarkable young woman in a neatly pinned sari, hardly your usual anchorwoman. (It's difficult to get channel bimbettes for this job—they don't mind dressing skimpy or mouthing inanities, but they wouldn't ever want to be caught reading a letter that goes, "Dear doctor, I've just been diagnosed as having prostate gonorrhea..."—so the show has to make do with doctors and nurses.)

Then the woman begins reading aloud, an unwavering pleasant expression on her face. "Dear Sir, I am recently married. My weight is 80 kgs. My wife weighs 37 kgs. She is too small made. Consequently I am not having satisfactory sex. My wife complains that in this situation even one shift is tiring. So there is no scope for two shifts. What can I do?" The anchorwoman stops reading, her smile intact. The gent slowly crosses his arms and replies: "What is he complaining about? How his wife escaped being made into chutney baffles me! And what does he mean by 'shift'? Does he think he is running a factory?"

The riposte is greeted by howls of laughter from TV audiences around millions of homes in Tamil Nadu, drowning out the rest of the doctor's remarks, which include some sane advice on the suitability of the woman-on-top position for the couple.

Hop right on to experience a half-hour roller-coaster ride on sex education (of sorts). Anchoring PP is Dr Mathrubhootham, a 57-year-old unassuming Chennai psychiatrist, who looks like everyone's favourite uncle. He even sounds like everyone's favourite uncle as he answers viewers' queries on sexual fears, inadequacies, fetishes and positions. Until he breaks irrepressibly into a film song or humour—puns, quotes, adult jokes, anything. Tamil viewers have so fallen in love with his style that he now commands mass popularity ("Second only to superstar Rajni!"). No wonder PP's racing towards its 250th episode.

Perhaps the only show of its kind in India, PP was the brainchild of Vijay TV producer and anchorman Rabi Bernard who, in 1996, conceived the programme after reading an Outlook cover story on Sexual Practices of Men and Women in India.Bernard was looking for a suitable anchor when he met Dr Mathrubhootham at a debate on Tamil cinema. The doctor was given very little time to speak. So, summing it all up, he said, "Tamil cinema was based on kadhai (story) in the past, then on sadhai (flesh) and now it is based on udhai (violence)." Bernard liked the doctor's quick thinking and manner of speaking and hired him to anchor PP.

The programme and its anchor opened somewhat nervously, with none very sure of how the conservative Tamil audiences would receive it. "For the first 10 weeks we were slaughtered!" chuckles Dr Mathrubhootham. "Viewers blasted us for telecasting smut and obscenity. One man wrote to ask, 'Why don't you just telecast blue films instead?' I told him we wouldn't give him that satisfaction; he'd have to buy his own tapes! My relatives and friends called to express their disapproval. As the weeks went by, however, attitudes changed. Perhaps because I had begun to preface the Q and A sessions with short, serious talks on sexual problems. After the initial culture shock, viewers began to respond very positively. We started receiving more queries than we could handle." Today, the programme gets over 200 letters a day.

And Dr M has his fans all right. Says Dr Narayan Reddy, noted Chennai-based sexologist: "Dr Mathrubhootham's programme singlehandedly broke all taboos surrounding conversations about sex, and made it a topic fit for drawing room discussion." Originally telecast at the late hour—by Chennai standards—of 10.30 pm, pp was preponed to 10 pm on viewers' request. Not only that, Dr M took it out of the studios to cities and small towns and made it an interactive experience. Today, pp is a runaway hit—its ratings have never gone below three or four—and the good doctor's name is a byword in Tamil Nadu.

PP's producer Navannan says the doctor never rehearses for his shows. "While we pick out the letters, research into Tamil literature for quotes and so on, the doctor's replies are always impromptu." Yet, despite his flippancy, Dr M strongly advocates old-fashioned family values and monogamy. That possibly makes his viewers trust his sexual advice. To the extent that even in the villages which have satellite TV, Dr M's name is synonymous with sex education. "Vexed with sex? Go to Dr M!" is the statewide credo.

The programme has been a revelation to Dr M too. The maximum queries come from young men, followed by middle-aged women, followed by men in their 60s, exactly in that order. But the women, even in conservative south, have become bolder. "They've become far more demanding. When I advised a young woman who had been brought to me by her mother not to continue with her promiscuous ways, she retorted, 'What's wrong with it doctor? This is just practice, for playing after marriage!'," the doctor tells you.

Is there a flip side to PP? Says one Chennai doctor: "Dr M has fallen into the humour trap. Just because viewers expect him to joke and sing, he indulges them. In the process, he dilutes the seriousness of the queries. His answers tend to be superficial. Besides, in case of queries from those whose sexual inclinations are different, he tends to be judgmental."

If Dr M is conservative, his attitude could well stem from his orthodox family background. The last of five sons in a conservative, middle-class family in Tiruchy, Mathrubhootham lost his father when he was five, and from then onwards—till he became a doctor—life was an ongoing financial struggle."I became a psychiatrist by default," he recalls. Wanting to become a surgeon, he got a short term posting to the Kilpauk Mental Hospital. Working under the very committed Dr Sarada Menon, Mathrubhootham himself became interested in psychiatry, and eventually post-graduated in it. He would perhaps have remained an unknown government psychiatrist, except for his enormous zest. He organised cultural functions for the hospital, wrote plays and skits, met vips, produced programmes for air and DD, participated in seminars and debates and eventually, through PP, became the star he is today. He has acted in several TV serials, some movies, written books for lay readers on psychiatric and sexual problems (his book Iniya Illaram or Marital Happiness is considered a great wedding gift). He has fans among both film personalities and politicians.

One film producer was so taken up with the doctor's shows that he made a full-length movie titled Puthira Punithama? It was a loosely-strung collection of sexual and psychiatric case histories. Dr M scripted it and even acted in it. The movie sank without a trace. Bad production values ruined the movie, which the doctor is amused to note, "surfaces now and then for a couple of weeks' run. Only, now they use my face on the posters!"

The man's verve is amazing. Apart from running a psychiatric practice and a nursing home for the mentally challenged, he supervises two old-age homes, records for TV, writes, shoots for films and has fun with a seven-month-old grandson. All this, despite having renal trouble and a host of other problems resulting from a 40-year battle with diabetes. It doesn't stop him though from quipping about his condition. "We can use allopathy or homeopathy, but finally we can trust only Venkatachalapathy (Lord Balaji)!" Says wife Geetha: "There was a time when I used to be embarrassed by his programme. But I'm more comfortable with it now. Besides, some of his fame has rubbed off on me. I never have to stand in a queue; someone always recognises me as the doctor's wife and makes way for me!" Of the doctor's two sons, the younger appreciates the programme while the elder constantly urges him to give it up. "I think there'll always be someone who's bothered by the programme!" sighs Dr M. "Like the man who wrote to me a few weeks back, 'All you are doing is ruining society!' I replied to him that that's what they said even about Socrates!"