Verge Of A Thriller

An absorbing tale full of unpredictability, wit, bewitchment and empathy. 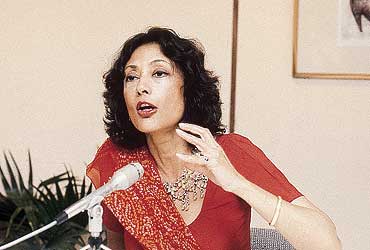 Norman Mailer once said that sometimes an author’s identity becomes so "pressing" that one is prompted to gauge one’s own "specific density" in the social world. And the most elegant solution to that, he said, was to write a novel with an emphasis on the self. Whether Bharati Mukherjee’s Desirable Daughters is the fruit of such a process is open to speculation. But her novel stays connected to a high-voltage line of irony, disallowing the narrator (who resembles the author in more ways than one) to take herself too seriously, while balancing deftly between earnestness and self-ridicule. If you haven’t already guessed it, the book is written in first person.

It is the story of three Bengali Brahmin girls from a westernised yet deeply traditional family from Calcutta. Marriage has separated the sisters, installing them in three different cities, two in the US and one in India, with mutually conflicting lifestyles. Family annals (of which there’s plenty) alone could have filled the book. But if you can plod through the 20-odd pages of the uncharacteristically stilted preamble, you’re in for a surprise.

The narrator, Tara Chatterjee, the youngest of the three sisters—the only one to have married according to their father’s wish and the only one to have divorced her husband, a fabulously successful Silicon Valley mogul—has a visitor at her San Francisco home. An impertinent twentysomething man introduces himself as her long-lost nephew, the illegitimate boy her eldest sister Padma allegedly had with her childhood heart-throb Ronald Dey. The young man hands her a letter written by his father, who is now a doctor in Bombay, corroborating the fact.

Christopher’s visit brings unwelcome tension in Tara’s placid family life, with her teenage son Rabi and her live-in lover, Andy. It turns out that their old acquaintance did indeed...