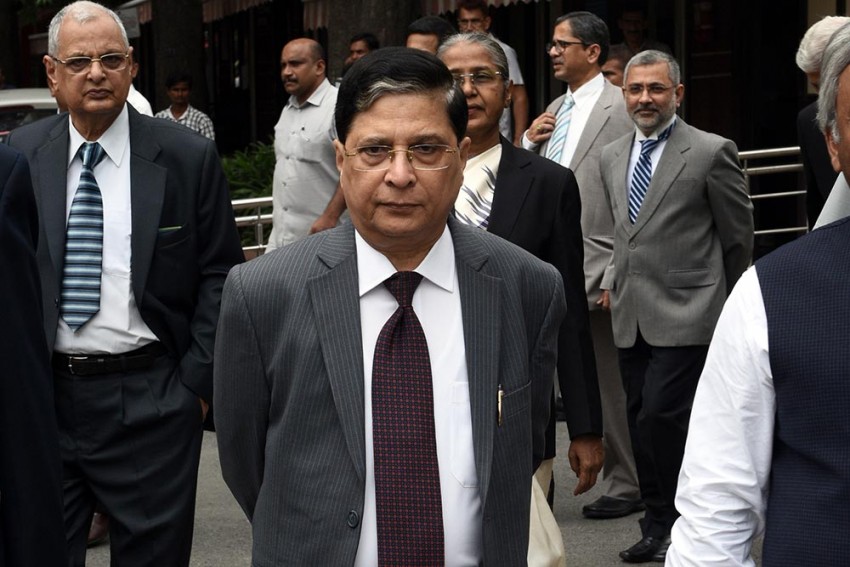 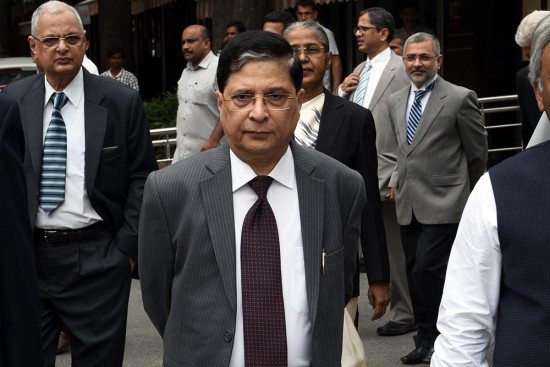 The day after Vice-President M. Venkaiah Naidu, as chairman of the Rajya Sabha, reje­cted the Opp­osition’s move to impeach Chief Justice of India (CJI) ­Dipak Misra, the CJI presided over the five-judge bench hearing the crucial Aadhaar case in the Sup­reme Court. Misra and the other four judges heard arguments on April 24 as to why the Unique Identification Authority of ­India—mandated to issue Aadhaar numbers to all residents of the country—needs to collect and ­retain technical metadata.

Misra had made it a point to attend court on April 23 too. Within minutes of Naidu rejecting the impeachment mot­ion, the CJI had made his way to Court No. 1 to hear routine cases and some public interest litigations. Now, unless the Opp­osition approaches the Supreme Court to appeal against Naidu’s decision and the court admits it too, Misra will continue hearing matters until he retires on October 2. As of now, it seems Misra may just have an uninterrupted run since the Opposition is divided over appealing the rejection of the impeachment motion. Until the Opposition makes up its collective mind about the appeal, Misra is ­expected to go about his work as usual.

Misra surely has a busy calendar, and important cases to hear, before he hangs his well-polished black boots. He is scheduled to hear the Ayodhya Ram Janmabh­oomi case on April 27, when a three-judge bench will hear arguments from both the sides to decide whether the case should be transferred to a bigger five-judge constitution bench. The plea to transfer the case to a bigger bench was made by senior lawyer Rajeev Dhawan on April 7, the last date of hearing. Dhawan had asked that if five-judge benches heard cases like women’s entry into temples and polygamy, why couldn’t it not be done with the Ayodhya case as well.

Presently, a three-judge bench headed by the CJI is hearing 13 appeals filed against the 2010 judgment of the Allahabad High Court, which mandated a three-way division of the disputed site in Ayodhya. Incidentally, none of multi-­judge benches headed by the CJI ­include any of the next four puisne judges who had gone public with their concerns about the functioning of the Supreme Court under Misra.

The Ayodhya case is significant for the BJP in the run-up to the 2019 Lok Sabha election. Several BJP leaders have told Outlook that they believe the impeachment motion supported by seven parties—Congress, CPI(M), CPI, Samajwadi Party, BSP, NCP and IUML—was aimed at ­intimidating Misra in order to influence the Ram Janmabhoomi case.

Had Naidu admitted the motion, an ­inquiry committee would have had to be constituted as per the Judges Inquiry Act. The CJI would have had to recuse himself from attending court while the inquiry was in progress. Though the Rajya Sabha members had been talking about imp­eachment for the past few weeks and collecting signatures for the motion, there was some uncertainty due to divisions within the Congress and it did seem at one point that the Opposition had given up on the idea. 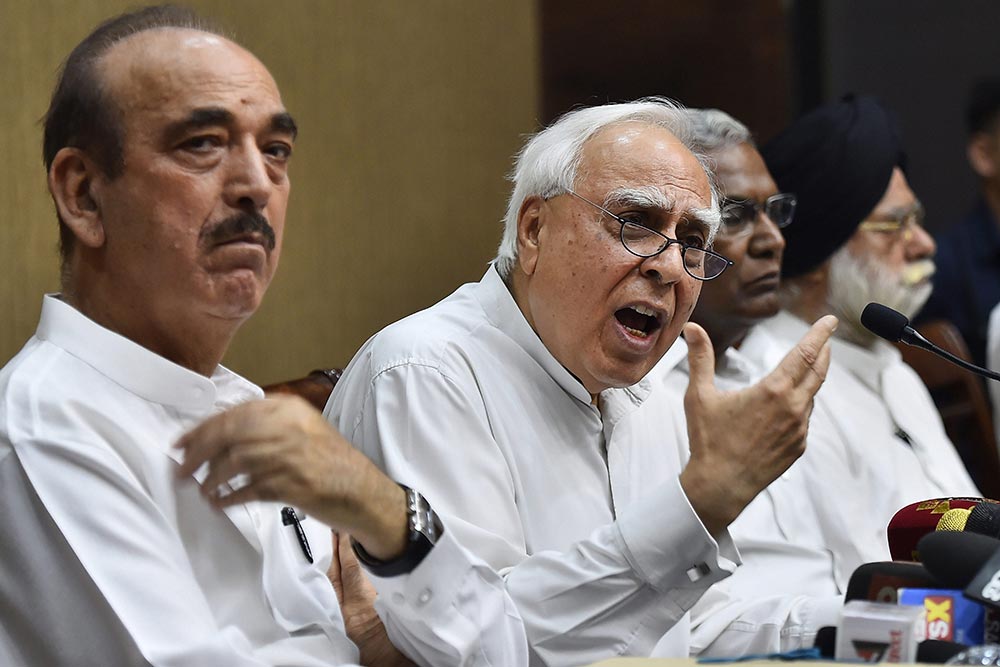 Photograph by PTI
Kapil Sibal’s confidence notwithstanding, the Opposition is split over appealing Venkaiah Naidu’s decision.

“No, we had not given up, but we’re just waiting for the verdict in the Judge (B.H.) Loya case,” counters a senior Rajya Sabha MP and one of the signatories to the petition. “Had the CJI allowed an inquiry into the mysterious death of the judge who was presiding over the CBI court in the Sohrabuddin Sheikh fake encounter case, we may have reconsidered the impeachment motion. But when the court threw out the case, we had no other option left.”

Congress leader Kapil Sibal, however, claims an appointment with Naidu had been sought a week before the April 19 judgment in the Loya case. “His office gave us time on April 20. It was not about the Loya case,” Sibal tells Outlook, insisting they would certainly move the ­Supreme Court to challenge the “illegal order” since it has shattered the confidence of the people. But he doesn’t say when they would do it, claiming it needs some prior deliberation. “The chairman’s (Naidu’s) order has jeopardised the country’s legal system. Clearly, the government does not want a probe into the charges against the CJI,” he says, calling the government’s decision unprecedented, ill-advised and hasty.

Naidu’s decision may have been hasty, but BJP sources claim the government had done its homework and the decision was a mere formality. Naidu had left for Hyderabad on April 21 on a three-day trip, but rushed back the next day to deal with the motion. He is believed to have spent the entire day, a Sunday, consulting legal and constitutional experts. In less than 24 hours, he rejected the motion.

Sources tell Outlook that among the people Naidu spoke to or met that day were Attorney General K.K. Venugopal, his predecessor K. Parasaran, former Sup­reme Court judge B. Sudarshan Reddy, former law secretary P.K. Malhotra, former Lok Sabha secretary general Subhash Kashyap and former legislative secretary Sanjay Singh. “For Naidu, seeking legal opinion was just a formality,” says a senior BJP leader. “Even before the Opposition moved the motion, the government had decided to reject it. A lot of deliberation, by the best legal minds in the government, had already gone into it.”

Kashyap tells Outlook that Naidu had indeed spoken to him. Without giving details of the advice he gave, he says Naidu did the right thing by rejecting the motion. “There is no prima facie case against the CJI,” says Kashyap. “The notice for mot­ion was based on probables and conjectures. Phrases like ‘appears to be’, ‘may be involved’ and ‘it seems’ were used to make the so-called charges. The persons giving notice were themselves not sure of their facts. How could the chairman acc­ept such a flimsy motion?”

On the Opposition’s contention that it is the task of the inquiry committee set up after the motion is adm­itted to prove the charges, Kashyap says there needs to be a prima facie case at least for the mot­ion to be accepted. “The police files a chargesheet if there is a prima facie case. Even in a court, hearing is not automatic. If the court feels there is no prima facie case, it can throw it out. For the impeachment motion to have been admitted, the Opposition had to categorically lay out the charges. They were conscious of the fact that they didn’t have enough proof to hold the motion,” he says.

Finance minister Arun Jaitley states in a blog post that the impeachment motion was poorly drafted. “The proof required to impeach a judge for being guilty of ‘proved misbehaviour’ has to be ‘beyond reasonable doubt’. Any inquiry set up subsequent to a possible admission of a motion cannot be a fishing and roving inquiry,” he writes, adding that it would be suicidal for the Congress if it decides to challenge Naidu’s order.

Many in the Congress appear to agree with Jaitley. Sibal’s confidence notwithstanding, there is a split in the Opposition over whether to go in for appeal. “Many Rajya Sabha members who signed the petition think there is nothing to be gained by approaching the Supreme Court now,” says a senior Congress leader. “As the four senior-most judges after the CJI have made their position public, it won’t be fair if they hear the case against Misra. Among the rest, some are alleged to be doing the CJI’s bidding, thanks to the allegation of bench-fixing.”

Not everyone in the Opposition holds this view—for example, one Congress leader is quick to disagree, saying they will go ahead with the appeal after the Karnataka assembly election. As of now, however, amid all the conflicting voices, it looks certain that the CJI is still in control as the first among equals in the Supreme Court of India.

No Poetry After Auschwitz?