What works for the film is the lack of intellectual ambition and an emotional excess and lachrymose sentimentality in which it grounds the cross-border friendship. 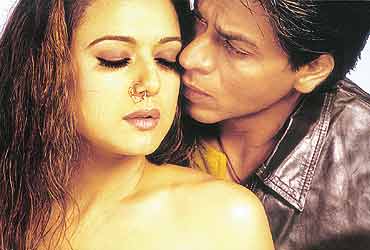 Three years ago in Gadar, Sunny Deol wrenched out a handpump from the ground and singlehandedly demolished many a gang of vicious Pakistanis. That was the acme of the aesthetics of hatred and jingoism in Bollywood, when the power of a patriotic script rested on trenchant talk and bloody duels between "them" and "us". With Veer-Zaara that animus makes way for some soft-focus, mushy duets between Veer Pratap Singh (SRK, read India) and Zaara Hayaat Khan (Preity Pakistan, of course). And therein lies its significance—in presenting a new pacifist, peaceful face of Bollywood.

There's no denying that the film's politics is facile, naive and simplistic, virtually bordering on the juvenile. Since it's an Indian film, the villain (a surma-clad but sober Manoj Bajpai) is from Pakistan and so is the girl who can be "brought over" to the Indian fold. But there's more. Take the scene where Veer tells Zaara's mom that the mothers in India are just as nice as her. Or the finale where he reads out a poetic prose about the similarity between the two nations and its people. These moments might be undeniably cheesy but something surely clicks. You can't shrug away the mass appeal of the sentiment, not when 90 per cent of the eyes around you are sobbing. What works for Veer-Zaara is precisely this lack of intellectual ambition and an emotional excess and lachrymose sentimentality in which it grounds the cross-border friendship. Ultimately, it's a good-hearted film wherein the underlying theme is the all-embracing goodness of 'people'.