It's free land for the poor. Only, there isn't enough promised land. 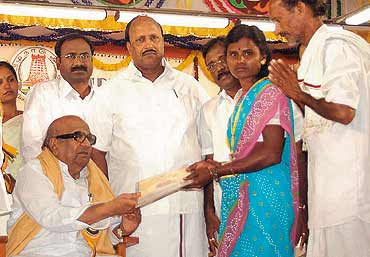 TN 'land reform'-DMK style: The actions are clearly inverse. West Bengal, Uttar Pradesh, Maharashtra and Haryana are evicting people—protests apart—to acquire land for SEZs, while the Tamil Nadu government is quietly giving away thousands of acres of land to the landless and regularising land encroached by the poor. The DMK dispensation may not have put in place a please-all free land distribution scheme in a highly industrialised state. But it has made a start, despite several limitations, and proved it is serious about keeping its poll manifesto promises.