Perhaps, the biggest reason why horror gets whitewashed is that despite the sprawling canvas there's no implicit, forbidding sense of doom, no lingering menace, no eeriness, no dark atmospherics. 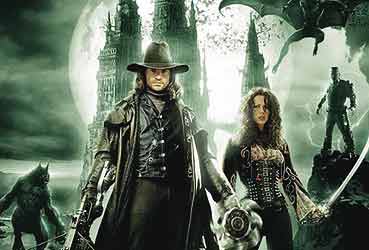 On the face of it Van Helsing seems a perfect night out for all the horror movie fans. Dracula, Frankenstein, Mr Hyde and werewolfs gathering in one film—what more do you need for sending that tingling chill up your spine? Actually lots more. Despite the presence of such Grade A evil apparitions, Van Helsing can't rise above its innate clunkiness. It is the least bit scary, in fact, quite often it literally nudges you into sleep.

The problem lies with Hollywood's current big obsession—non-stop action, eye-popping sfx. These are the two heroes of the film, everything else is incidental. There are fast-paced chases, the opening scene of the mob heading for the castle of Frankenstein is an eyeful, so is the vampire costume ball. Wish the story could have been as interesting as well. The plot, which hinges on connecting well-known horror myths and legends, is innocuous rather than ingenious. The characters are never fleshed out so no great acting should be expected either. Van Helsing (Jackman) is a monster-hunter employed by a secret Catholic organisation to wipe out all evil from earth. He is sent to Transylvania to take on Dracula. During this mission, he also finds time to romance Anna (Beckinsale) who initially mistakes him for her family's killer. There's Anna's brother Velham who has been bitten by the werewolf and is painfully aware that he'd one day become wolf man and kill his own sister. And there's also the comic sidekick Q made to give a modern James Bond spin to Van Helsing. Lots of other strange creatures are thrown in—like the vampire bat wives who need Frankenstein's monster to bring their kids to life.

Efficient SFX help simulate some fantastic forms and monsters keep getting morphed digitally. But they all make you grimace than scream with dread. Perhaps, the biggest reason why horror gets whitewashed is that despite the sprawling canvas there's no implicit, forbidding sense of doom, no lingering menace, no eeriness, no dark atmospherics. There's hardly any unsettling or unpredictable element. Be it castles, mansions, cloaks, cobwebs or the heavy mist—even the most established formulae of horror films need to be bolstered by some skilful story-telling. In Van Helsing that gets compromised for in-your-face SFX. It's this relentlessness of the action and technology that make the film more of a simulated ride. I wouldn't have boarded.

Far From The Jungle