The April 1 deadline is given a miss once again. The result: Very Aggravated Trouble. 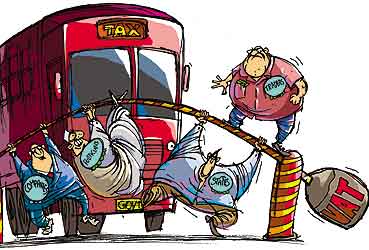 outlookindia.com
-0001-11-30T00:00:00+0553
Sitting at a table bursting with files, in stark contrast to the bare walls and newly-tiled floor, Abhay Tripathi waves his hands in mock despair at the confusion that rules his remodelled room in North Block. This Andhra cadre officer who spent five years sorting out the VAT (value-added tax) issue with acrimonious states, has just been given a 12-month extension by a clearly foresighted PM. For the second time, the VAT deadline of April 1 has been missed by the same states who'd agreed on the date, thanks to political populism, unpreparedness, competitiveness, and all-round confusion. Result: Very Aggravated Trouble.

Even as Haryana launched VAT without waiting for the requisite President's approval, Delhi bjp president and former CM Madan Lal Khurana is happy after retailers downed shutters for 48 hours in protest last week. Says he: "Delhi is a city formed by traders. It's not a producing centre, only a distribution centre. I'll fight against VAT as long as it takes. Nahin to Dilli ka trade tabah ho jayega (else it will finish off trade within the city)." Counters Dr Ashim Dasgupta, West Bengal FM and chairman of the empowered committee on VAT: "It's very unfortunate that some of us are reversing our commitment even after sending the bills for presidential approval. We will thrash out the issues at a meeting on April 8."

Predictably, the central government is passing the buck to the states. Said an April 1 press note: "The introduction of VAT in a patchwork form by individual states without corresponding action by others is not a workable proposition." Added a top North Block official: "We're just facilitators here. But all our efforts have come to nought as some states like Delhi are being unnecessarily adamant." Only the Madhya Pradesh bill has got the President's assent and six more from AP, Karnataka, West Bengal, Maharashtra, Gujarat and Kerala are in line.

Though the battle for VAT began 10 years ago, the first date for changeover was fixed for April 1, 2001. The Centre then fixed generous three-year graded compensations, halved the central ST to 2 per cent, and the budget promised to backstop any loss accruing to states from VAT. Why, then, are states opposing a system that's transparent, equitable, efficient and self-administrable, compared to the regressive sales tax system that taxes tax-paid goods?

North Block calls this opposition "collusive corruption". VAT, a charge on the value that producers, wholesalers and retailers add to goods at each stage of their production and distribution, is to replace sales tax and 14 other levies that together contribute 60 per cent of states' income and translate into a total levy of 20-26 per cent. Delhi earns Rs 4,000 crore-odd from sales tax, and traders evade an equal amount, if not more. Since VAT is a multi-point tax, that amount will now have to be coughed up, there's just no escape. Even in Maharashtra, sales tax evasion ranges up to a third of collections. Assuming an evasion of even a quarter of total sales tax (central and state) collections of Rs 85,000 crore, or Rs 22,000 crore, it's easy to understand why traders are shivering in their safaris. Says investment banker P.N. Vijay, who's also convenor of the bjp economic cell: "In the ncr, around 40-50 per cent of all consumer products sold are from the practically untaxed unorganised sector which yield dealer margins of up to 100 per cent if the purchases are unbilled. Once VAT comes into effect, the party will be over."

Industry and traders are unconvinced. They argue prices will increase at the consumer end because of various reasons. Primarily in states which have enjoyed lower sales tax rates like 8 per cent in Delhi, while companies like Bajaj Auto and Telco in tax-heavy Maharashtra will gain.Similarly, industrial states which are producing centres will benefit as they'll be able to claim credit set off for various levels, while consuming states like Delhi will suffer.

While most corporates are prepared for a smooth transition according to SAP India's Nagaraj Bhargava, they too are worried. There are five VAT rates: 0 per cent for essential products like milk and vegetables, 1 per cent for bullion, 4 per cent for semi-essentials like bread, edible oils and salt and industrial inputs, 20 per cent for non-essentials like liquor. All other consumables, 60 per cent of all goods, will attract 12.5 per cent. United Breweries, for instance, has until now paid only 8 per cent ST and will pay 20 per cent under VAT. Plantation items like tea and coffee will pay 12.5 per cent instead of 8 per cent. Salt will attract 4 per cent instead of zero, though Gujarat, where most salt pans are located, has already waived VAT. So salt will be definitely cheaper in Gujarat than in Delhi or Bengal.

In Maharashtra, where pharma and fmcg industries are up in arms, D.G. Shah, DG of Indian Pharmaceutical Alliance, says a 12.5 per cent VAT for medicines, ideally essential commodities, will raise consumer prices by over seven per cent, or a new burden of Rs 1,282 crore. At 4 per cent, they'd be almost revenue-neutral or a loss of only Rs 185 crore.

There are other problems too. While luxury tax and turnover tax will go, states won't scrap octroi and entry tax yet. But an efficient VAT needs the removal of all state taxes. If all indirect taxes in India were to be converted to VAT, the highest VAT rate would be 44 per cent! Secondly, VAT should lead to a unified market in which tax paid in one part of the country should be given credit on the same product/final product in another. But VAT won't allow tax credit on inter-state transactions, currently taxed at 2 per cent central ST. So, companies with long distribution chains will have to rearrange their supply economics and even sourcing strategies. fmcg units with deep rural markets would be hit, while regional brands will benefit.

Should consumers worry about rising prices then? Retailers fear that VAT will tax the distribution margin for the first time, leading to an additional tax component in the final product. "But," says Rajeev Dimri, partner, Ernst & Young, "in the case of packaged commodities, the MRP is uniform across states, so the argument that businesses in Delhi or other states will suffer may not be true."

Adds Dimri: "It's possible that certain goods become dearer, but the reverse will also happen. Though dealers may need to maintain additional records, VAT will only reduce compliance cost for dealers, as this is a self-assessment system." Agrees P.A. Krishnamurthy, director, Weights & Measures, government of India: "The MRP allows for the highest possible margins and all duties. But the manufacturer has the right to redefine his margins. It's only after VAT is implemented that the manufacturer can know whether they will have to be refixed. "

With the economy in doldrums, corporate India may be forced to absorb the costs of changeover which estimates suggest could run up to Rs 500 crore. Even state-level administrations haven't geared up—over 3 million retailers will need to get VAT registered in the next couple of weeks! However, as Dasgupta says, only 20 per cent of traders will ultimately fall within the VAT net, small traders will be outside. A massive ad campaign that's ready with North Block will also be unleashed to educate the people used for long to buying without bills. VAT will definitely change all that and hopefully for the better, if only states could fix a date.