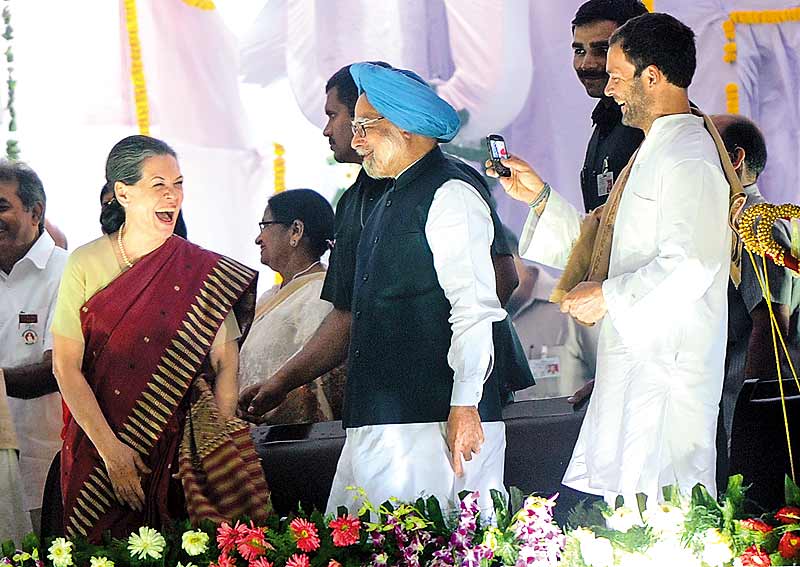 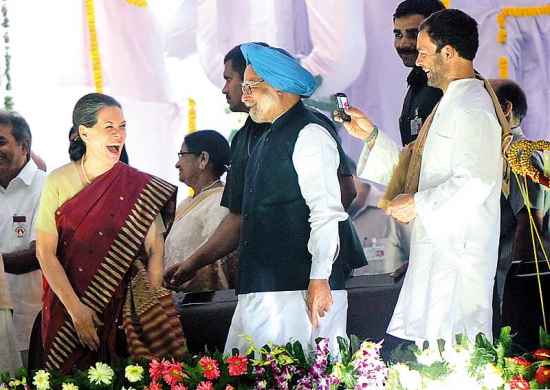 The Dynasty is today under savage attack, is the end nigh? Discounting the happenings of the past couple of months, the last big corruption scandal to hit the Gandhis was Bofors in 1989. Since then there has been tragedy, drama, but all of it has only been fodder to the deification process of the family in the national imagination. Rajiv Gandhi is assassinated, the widow comes forth, becomes a reluctant politician, is initially thwarted, then rises to lead the party back to power. Her son, meanwhile, continues to prepare for his duty and dynastic calling. A daughter waits in the wings....

But suddenly, in the last two months dirt has flown, scandals have outed, sullying the picture and raising questions again about the first family of India. First came the Robert Vadra deals that left a derisive Indian public asking how Priyanka’s husband got rich so quickly (well, with a little help from friends, like a Congress CM and one of the nation’s top builders). Now questions are being raised about the manner in which the Congress party transferred Rs 90 crore to a private trust managed by Sonia Gandhi, Rahul and members of their close inner circle. The charges were raised by known family baiter, Janata Party president Subramanian Swamy, who has in the past made wild allegations against the Nehru-Gandhis. But this time round there was enough meat in it for the party to issue a qualified mea culpa, but then it was all in the good cause of reviving National Herald, a defunct newspaper with a long association to the party. The scandal is complex, and there are issues for the income tax and legal authorities to examine.

The question now is: is the dynasty losing its halo? Assistant professor of political science at Delhi University Avinash Mishra says perception is important in this age of technology. “Till now, the image of the Gandhis (Sonia and her children) was that of a charitable family giving donations to just causes. This image comes in conflict with the picture of a Robert Vadra having many houses and properties to his name. And now the Congress president herself faces charges of financial improprieties. For me, this is a huge loss to the credibility of the Congress and more so to the Gandhis.”

But in an age when there is such a welter of charges and scandals hitting politicians, business houses and corporates across the nation, does anyone notice who’s being accused? Is the din too loud for the details to be absorbed? The good news for the Congress is that the principal opposition, the BJP, is battling its own demons. But in times like these, when the accuser and the accused jostle for space in TV studios, does the silence on the part of Gandhis help or harm their image?

Sociologist Dipankar Gupta says the core defining feature of the Congress is the family and the party will rally around them. “Just as the BJP has Hindutva and the CPI(M) anti-Americanism, the Congress has the Gandhis,” he says, adding a rider: the question is also of propriety in democratic politics. “True, there is a lot of muck being raked and legally maybe the scandal will never be sorted out. But in the context of propriety, the party has taken a hit. At the end of the day, democracy isn’t just about legality, it’s also propriety.” His suggestion: the Gandhis distance themselves from the trusts they are associated with.

In times when the accused and accuser jostle for space on TV, does the silence of the Gandhis harm their cause?

But is all this brouhaha just limited to the capital’s political salons? Do the thuds of the scandals get more distant as we move away from Delhi? Professor Narendar Pani of the National Institute of Advanced Studies, Bangalore, is one who doubts if the charges on the Gandhis will have any impact on state-level politics, at least in Karnataka. He believes corruption charges affect politics in the state only when local politicians are seen to have made money and continue to remain in power. “How all the issues get played up in the run-up to General Elections 2014 remains to be seen. How the high command is perceived in Delhi is not the same as how they are perceived in Karnataka.”

He also argues that what the media does in Delhi and Mumbai is increasingly irrelevant in the states. To illustrate, he gives the example of ex-telecom minister A. Raja who spent time in jail and came out to a hero’s welcome in Tamil Nadu. “He was seen as a man who brought a mobile phone to every home at affordable rates. Perhaps the Gandhis are seen more as chief adjudicators in state politics rather than as corrupt players. Also, the Bofors kickbacks extracted a price from Rajiv Gandhi and the Congress as before he was seen as spotlessly clean. Today, no one’s seen like that.”

But surely, for the middle class it appears that the Congress is trying to brazen out the charges of corruption? Salman Khursheed is elevated from law to external affairs after facing down a scandal. S. Jaipal Reddy is eased out of the oil & gas portfolio after apparently annoying a business house.

The Bofors kickbacks became public over two decades ago. But back in 1971, there was the Nagarwala case when a raw agent collected Rs 60 lakh from a bank allegedly impersonating Indira Gandhi’s voice. The charges were never proved. And there was no 24-hour channel to play the news again and again. Those were innocent times when people were not so tuned in. Professor M.S.S. Pandian of jnu says “the English media should not be treated as a yardstick for what happens on the ground. At best one can speculate on how these charges will be calibrated for elections. Even then, it’s the image of the state leaders that will matter”. Professor Sudha Pai of the same varsity says one can never really say how this will play out. Yet she points out that “all this comes precisely around the same time when Rahul Gandhi is poised to take over as No. 2 in the party...so the charges might stick but the Congress will rally around them. Corruption is across the board and I don’t think the common man makes his decisions watching news channels in Delhi.”

Analysts from the states argue that TV channels may amplify charges of corruption but are not always a force multiplier in the states where channels have their own logic. Calcutta political commentator Rajat Roy says that “at best, there is a curiosity value attached to these charges. This is not to suggest that the people of Bengal aren’t perturbed by corruption. Rather, it hasn’t reached a tipping point where the charges snowball into something big yet.” V. Krishna Ananth, associate professor at the department of mass communications, Sikkim University, sees it differently. He feels there will be further damage caused by media amplification.

The dynasty is older than independent India and its immunity may be wearing thin. Hyper media is also hitting the dynasty in an age when the pre-eminence of the Congress is already challenged by strong regional players and the BJP. It could take a toll.