'Vajpayee Is Too Shrewd' 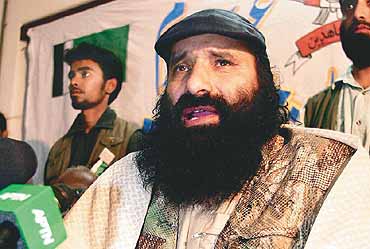 outlookindia.com
-0001-11-30T00:00:00+0553
Has the Pakistani government asked the jehadi groups to close down training camps and stop cross-border infiltration?
This so-called infiltration is just misleading Indian propaganda. None of the Kashmiri outfits have training camps inside Pakistan. We have mobile training camps in J&K as its forests and mountains provide suitable conditions for guerrilla warfare.

How do you view the US state department's annual Patterns of Global Terrorism report, which raises serious concerns about the terrorist threat posed to India by Pakistan-based mujahideen groups?
The report is baseless. It's not India that faces a terrorist threat but the innocent people of Kashmir, who are victims of state-sponsored terrorism. The Kashmiri mujahideen wage their armed struggle under a code of conduct that restricts them to targeting military personnel and installations, not civilians.

Do you think the inclusion of the Hizbul Mujahideen in the state department's list of "Other Terrorist Groups" will affect the armed struggle?
No, not at all. Do you think the US backs us? The decision is unrealistic, partisan and contradictory to ground realities. It has dismayed us. It's unfortunate that the US has been influenced either by pressure or propaganda by the fanatic and repressive regime in New Delhi. Washington's unjustified tilt towards India is disappointing.

Do you believe that militancy can resolve the Kashmir issue?
Militancy is not the solution. Everyone knows a solution to the Kashmir issue lies in talks. But we were compelled to wage an armed struggle due to India's obstinate refusal to come to the table.

Then you should support the fresh peace initiative between India and Pakistan.
We are ready to support the Indo-Pak initiative for the sake of peace. But then India should also admit that Occupied Kashmir is a disputed territory. Secondly, the Hurriyat should be included in the peace process.

Do you think Musharraf and Vajpayee are sincere in resolving the dispute?
One can't exactly read the mind of a very shrewd politician like Vajpayee. But he has mostly exploited the Kashmir issue for elections, instead of making any sincere effort at resolving it. Even today, if he has shown willingness for talks, it's all because of the pressure mounted by the freedom fighters.

And what about Musharraf's intentions?
I have no idea about his intentions. But Pakistan can play a major role in an amicable settlement of the Kashmir dispute.

What if the Indo-Pak peace initiative fails?
Then jehad will be the only option left.

Looking Down The Barrel