"Vajpayee Is Taking A General's Approach"

The Pakistan Prime Minister in his first one-to-one interview since assuming power. 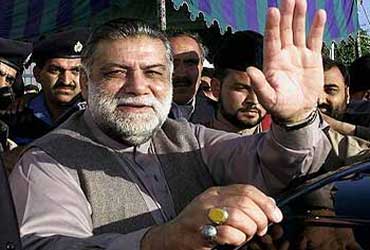 outlookindia.com
-0001-11-30T00:00:00+0553
Pakistan Prime Minister Mir Zafarullah Khan Jamali is a man of immense grace and simple tastes. Dressed in a beige salwar kameez with a dark-shaded waistcoat, he gets up to greet me with a traditional salaam, in contrast to the handshake that had been in vogue under the military regime. As he raises his hand, I notice he still wears the two rings with huge inlaid stones that he used to during his days as an ordinary politician.

The room where the PM receives me is airy; two French windows overlook the garden where roses are in bloom. Instead of sitting across an imposing desk he takes the sofa, imparting an air of informality. The decor is subtle, none of the outlandish Mughal decor of Nawaz Sharif or those imported crystals of Benazir Bhutto. Upholstery is in subtle shades of raw silk, the only decorative piece a silver artifact with a lapis lazuli set into it—and even this is in an adjoining room where I had to wait a few minutes before being ushered in.

Jamali has brought with him the great Baloch tradition of hospitality; the staff ensures that a glass of juice or a cup of tea is never far away. This is the first one-to-one interview the PM has consented to, declining individual requests even though the state media has reportedly been pestering him to at least make an appearance on television. An aide of Jamali quotes him telling the state media's representative: "What will I tell them? When I have something to say, then I will take such a step".

Jamali hasn't changed a bit since the last time I met him. He's jovial and confident, and for a few fleeting moments, I even forget I am interviewing the country's prime minister. None of his advisors sit with us, nor does he shy away from any question. Simple and straight. As always. This is precisely the attitude he needs to display to take the Opposition along with him.

Afterwards, interview over, as I am about to leave, the prime minister's secretary is ready to usher in a stream of overseas dignitaries. "Give the prime minister some time for lunch," I remark. "I don't eat lunch. I simply work," retorts Jamali. Excerpts from the interview:

You are one prime minister who has arrived in a scenario which is scary. Internal and external challenges have never been greater; you have a serving chief of army as president, and a slim majority. How do you plan to cope, especially as you have yet to take a vote of confidence in the lower House?
Yes, it is difficult but I will not say it is impossible. As a Muslim I have great faith; it is this belief which gives me strength to realise that though right now things are extremely difficult, I know they are not impossible. I have a challenging task before me. I hope to go about it in a very humble manner, very slowly, showing respect to all and their views as well.

Will this be enough?
I am, you must remember, also a firm believer that the top priority is Pakistan, that it comes first and everything else is secondary. If we keep this vision, then everything else will follow.

How do you visualise the daunting challenge facing you?
Now, if you ask me about the daunting challenges that I face, I would say that my government's first priority is to improve the existing law and order situation. That is certainly problem number one. Then follows the issue of prices of commodities, which affect the common man greatly. I know I have to envisage all the policies—whether they are in the area of finance, defence or foreign affairs. I realise that a change of government does not necessarily mean a change in policies...but we have to reassess all of them.

So what will you do? Most of the economic policies have been cut and dried with donor agencies by the former military regime.
One has to study them, as a newcomer we have to familiarise ourselves. We can see where there is room for manoeuvre and improvement. If a citizen of this country can sleep peacefully, he can then think of providing food for his family, ponder over education and move about freely in the country. But he can only do this if he feels safe and secure. There are also issues like health and education, naturally. But I say again that our top priority is law and order.

You mean you think you can deliver?
We have to go along. Plenty of improvement is required because the voter today is very different from the one 10 years ago. Today, they practically demand things, and instantly. But, personally, I will never hold out a promise or commit if I cannot deliver. But I will endeavour and struggle along with my cabinet, with Parliament.

India took nearly a week to congratulate you when you became prime minister. It was one of the last countries in the region to do so. Then it played difficult when your government was ready to host the SAARC summit. But in Pakistan's elections, India did not figure at all. It was not even an election issue. How do you explain that?
When we took over, we saw that India had certain reservations, for example, on SAARC. They were at one time facing a military government here. They might have had some resentment in dealing with them. But we saw that President Pervez Musharraf has taken the right approach: going for the Agra summit was the right step. In fact, it was a political approach. Unfortunately, while the military took a political approach here, I was amazed that Prime Minister Atal Behari Vajpayee's government took a general's approach and talked, of all things, about a fourth war with Pakistan! This was simply unbelievable and this too, coming from the world's largest democracy. We certainly did not expect this from India.

Are you disappointed?
After my government took over from the military government, I truly felt that India would change its attitude towards an elected government. But this has not worked out. My assessment was that we should have moved on politically but I have to say that India just does not want to talk to Pakistan. We have been saying this to our well-wishers and friends outside Pakistan as well. Please look at, and examine, the Indian attitude. We are ready to open a dialogue at any time.

How keen are you to start the political process?
As prime minister, I want a dialogue. This is the message I want to send to India. In politics either you get convinced by the other party or else you convince them. But tell me what do you do in a situation like this? You saw we had to postpone SAARC. It was not something that we wanted to do. India just does not care or bother about other SAARC countries. If it is really the biggest democracy, it should really be more democratic in its attitude.

In recent times, yours is the first government, in contrast to Benazir Bhutto and Nawaz Sharif's, to enjoy the backing of the military. Some feel this could enable you to improve relations with India.
Yes, I realise this and I do agree with this perception.

You recently had your first high-level exchange with the US, when you met assistant secretary of state Christina Rocca this week. Did relations with India come up?
Yes, the issue did come up with Christina Rocca. We talked, amongst other things, about India, Prime Minister Vajpayee, and SAARC. I told Ms Rocca about my days in boarding school in Murree with my cousins. There was one cousin who used to continue crying even when there was really no reason to do so. He always had a gripe. Ms Rocca laughed when I compared the two situations.

What kind of impression do you think Christina Rocca took back to Washington?
Well, the way I see it, the US is right now assessing how the new government is doing and in which way it will be moving. They are assessing the extent of continuity (in policies) there will be, now that there is a democratic government in place. You know Pakistan has a bad track record; policies change overnight once a new government comes in.

Do you think you convinced her that you and your government were on the right track?
She herself said and I quote her exact words, "I am leaving satisfied." Besides the regional issues, we also talked about exchanging teams and committees between the two countries.

Are you still keen on meeting your Indian counterpart?
Yes, I was looking forward to meeting Prime Minister Vajpayee at the saarc summit. Unfortunately, it has been postponed. It would have been a good opportunity (to meet him). So let us see when such an opportunity arises again. Well, everyone knows that they have not even sent their high commissioner as yet. What can I say? The status quo will remain and we all know that this is not good for anyone in the region.

One of the few positive aspects of the last military regime was the fact that they more or less tolerated a free media. Will this policy continue?
I have many friends in the media. They may write whatever they like. I will never advise them. But they should at least be polite. Instead of using words like 'lies' for the government they can say that someone is not telling them the correct things. The media has to be more charitable!

An ex-Test cricketer, a famous club take the game to inner-city youth