She banished him for 19 months under POTA. Yet, Vaiko ditches the DMK for Amma. Updates 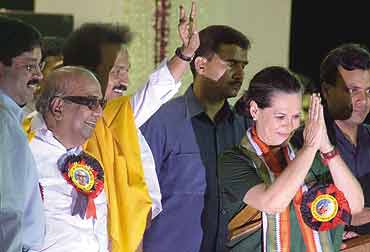 For over three months there was speculation that the MDMK leader would quit the DMK-led seven-party Democratic Progressive Alliance (DPA). When he did so after much protraction on March 4—a fortnight after assuring his one-time mentor and DMK chief M. Karunanidhi that he would stand by the DPA—Vaiko had intuited a political truth. That there’s no ideology in politics. The price: 35 seats from the AIADMK instead of the 22 that Karunanidhi had agreed to yield.

Early this January, 62-year-old Vaiko had described the MDMK as having the O-positive blood group that could match anybody. Vaiko was bloody serious. One of MDMK’s key activities has been to organise blood donation camps. During his early DMK days, Vaiko was, in fact, convenor of the Dr Karunanidhi Voluntary Blood Donors Association in Tirunelveli. Come to think of it, Vaiko allying with the DMK is as contradictory as his allying with the AIADMK. The MDMK’s very birth was in the crucible of anti-DMK politics. Decrying Karunanidhi for promoting his son M.K. Stalin and other family members, Vaiko felt his very life was in danger in the party. He floated the Marumalarchi Dravida Munnetra Kazhagam in 1994. Five DMK cadre immolated themselves over Vaiko’s exit. Both the DMK and AIADMK have done flip-flops, allying alternately with the "communal" BJP and the "secular" Congress. (Today, the BJP, however, is on nobody’s radar). The CPI and CPI(M), too, have shifted camps with unfailing regularity.