The dancer-actress is happy to be in Lahore, says Muslims are kings there. 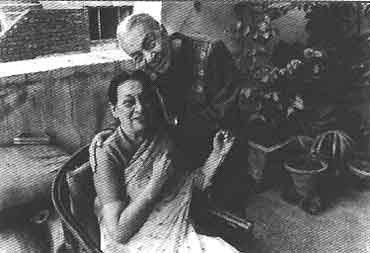 QAIDIYON ki tarah apne hi mulq mein aati hoon. Thaane par peshiyan karni padti hain. Visa nahin dete hain . (I come like a convict to my land, submitting to police checks et al.) For God's sake I used to live in Bombay till 1960 till personal compulsions forced us to migrate. My husband Hameed sahib wasn't keeping well, his entire family had settled in Lahore. Hence the shift. I didn't want to go. Resisted the notion for two years before finally following my husband.

My sister Zohra and I were working with Prithviraj Kapoor's Prithvi Theatre in Bombay in 1947. There was hardly any rioting there. We never felt threatened though Prithviraj received anonymous letters asking him to dismiss the Muslim girls from his troupe. We just laughed. Went out in the streets to sing and dance in peace processions along with other artists. That bebaaq (fearless) attitude probably saved us.

On one occasion all Muslim ladies living on Marine Drive were asked to shift to Bhopal for safety. We refused. Finally it was decided we'd hide in bank vaults in an emergency situation. The need never arose. More exciting events occurred post-Partition. A Pakistani politician Mend, travelling incognito, stayed as our guest, en mute to his home in Allahabad. Morarji Desai got wind of it. The guest went underground. Desai told my husband, "we know he was with you. We're not taking action only because of your wife. Please ask him to leave." There was personal regard between people those days.

How do I feel about India today? Many Pakistanis said post Babri Masjid, "Yeh to hona hi tha" (this was inevitable). They also say Indian Muslims face discrimination, have no status, no future here. Admissions, jobs are hard to come by. Bezaari badti jaa rahi hai (dispiritedness is increasing). The intermarrying with Hindus is a desperate bid to escape persecution, not a sign of liberalism, integration, as it is assumed here. Yahaan Hindi zyaada hai, Muslim culture ja rahi hai, Muslim par zyaadti hai aur badti hi jaayegi (There's too much Hindi. Muslim culture is disappearing. Oppression on Muslims has increased, will escalate.)

How do I feel in India? Good. Bindi nahin lagani padti (don't have to wear bindis), contrary to what people think in Pakistan. I meet old friends and family. Your Sangeet Natak Akademi graciously honoured me in 1995 for my services to Indian theatre. Indian dance, religion I can't react to as I could while in Uday Shankar's dance troupe. Then, I'd go to temples, study Hindu mythology with the sincerity that my niece Kiran Sehgal does now. Life has changed. Hindu religion doesn't attract me that much anymore. The charm has faded. Can I tell you something? People meeting each other is fine. Par dono mulq ek ho jaayein ... that won't happen. It's gone too far. I don't think the two countries can ever reunite.

Let literature and culture unite. Once we allow exchange there, maybe we will be more tolerant of each other.