The tinseltown candy factory is brimming over with syrup-dipped perversities 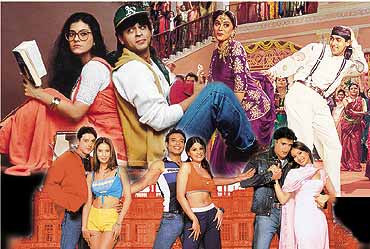 outlookindia.com
-0001-11-30T00:00:00+0553
Hum Apke Hain Kaun did not invent the Indian joint family. It just created a movie-genre out of it. Then again, it is not the first film on the Indian joint family. It just gave us 'more'—more people per frame, more running time and more songs. And a lot 'less'—less complexities, less conflict, less violence, less questions. That kind of sums up the portrayal of families in the mainstream Mumbai-centric Hindi films in the post-liberalisation, post-satellite TV India of the '80s and beyond.

The utopian world of hahk is easy to map. Families are as extended as they can be. Men are decent and hard working, running businesses successfully. Women, with ad-film good looks, are loving homemakers, also adept at singing, dancing and painting. And they are all addicted to that awful trivia called antakshari. Marriages can be prefixed with 'arranged' or 'love'. Love itself is a pretty domesticated animal here, blossoming amidst family celebrations, through mildly flirtatious songs. Things like property disputes, caste or demands for dowry are mysteriously unheard of here. Both men and women are willing to sacrifice love and individual happiness for the family—all supposedly very 'Indian' values. There's nothing wrong with it as fantasy, is there?

No, there isn't. The problem is when film after film is disproportionately obsessed with the man-woman relationship, aka 'love'. It appears that Indian cinema has restricted itself to love stories to the tragic exclusion of a range of genres and themes.

Things get more dubious when the Juhu-Pali Hill candy factory churns out Dilwale Dulhaniya Le Jayenge, Kuch Kuch Hota Hai or Mohabbatein where traditional, and even regressive, behaviour is sheathed under a veneer of modernity, making it all look cool and hip. The height of Indian values is represented by a girl in kkhh who studies in England, wears a mini-skirt but can sing Om Jai Jagdish Hare for effect. Needless to say, her dream of a happy family does not include a career for herself. That is as true of Rani Mukherjee in kkhh as of Kajol in ddlj. If rebellion was the hallmark of youth in earlier films, now it is conformism—exemplified by the dollar-chasing geeks of the software generation. Shahrukh and Kajol won't marry against their parents' wishes in ddlj. Aishwarya will rather return to her husband than her lover in hddcs. Horror of horrors, she even invokes the eternal mangalsutra and its omnipotence in defence of her eventual decision! In Mohabbatein, she would rather jump to her death than try to persuade her father to let her marry her lover.

It is easy to see why Indians everywhere lapped all this up. hahk happened in 1994. The satellite invasion had begun with soaps like The Bold and Beautiful. kfc and McDonald's were threatening to move in. It was okay to aspire to the West when it was distant and difficult to attain. But when it entered your drawing room, it was time to press the panic button and switch on the defense mechanism. Time to bring out the boutique-ethnic, plant the tulsi in the yard, brush up on your karwa-chauth rituals and pose for the group-photo!

As for the nris, they were guiltily yearning for an India of their memories, which never really was. These films were dadi's recipe for instilling family values into the younger abcds likely to go astray in the immoral West.

But what are these so-called family values? Mostly patriarchal, Manu-inspired rules of the joint-family jungle game that puts the burden of retaining the virtues of Indianness on the already over-burdened shoulders of the womenfolk.Not coincidentally, the rise in the popularity of these films runs parallel to the rise of neo-Hinduism in our political and cultural space. The insincerity of the genre is compounded by the fact that most manufacturers of these tamashas do not themselves believe in the values about which they make such a song and dance.

Post-hahk, the family-saga affliction from Mumbai has spread rapidly to the South too; and the same convenient cliché#s from Ramayana and sundry mythological mumbo-jumbo have spouted ad nauseam. Mercifully, these have been balanced by a diversity of themes.

Will the success of a Lagaan and a Gadar end the popularity of these cloyingly sweet syrupy sagas? Faithfuls need not despair. The next family melodrama with yet another karwa-chauth number and a bigger group-photo ending is just around the corner.

(T.B. Srinivas is a filmmaker and Utkal Mohanty is an advertising professional)

'To Be Indian Allows You A Distinctive Place'