California may not be Maihar, but sarod great Ali Akbar Khan has made it his exiled gharana 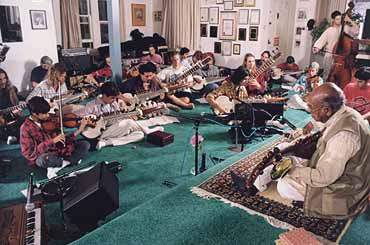 ON the edge of downtown San Rafael in upscale Marin County, on the other side of the Golden Gate Bridge that connects to San Francisco city, stands the imposing building of the Ali Akbar College of Music (aacm). You can't miss the college because of the massive, colourful glass image of Sarasawati that dominates its facade. This is considered the abode of music in the Bay Area, where sarod (spelt sarode in these parts) maestro and Padma Vibhushan Ustad Ali Akbar Khan has been teaching for 35 long years the language of God, where the spiritually hungry come to devour food for the soul.

Entering the two-storeyed complex feels like stepping into an ashram. Peace and stillness hang in the air, mixing with a floating medley of notes. The rhythm is languid—a slight return to a subcontinental life from which grew one of the most sophisticated systems of music in the world. On the walls of the narrow entrance and the room beyond hang portraits of Saraswati, Durga, Ganesh and Krishna, interspersed with photos of Khansaheb (or Baba as he is reverentially called). Also, plaques and old posters. Stop by to read these and you will find on one violinist Yehudi Menuhin's inimitable scrawl: "For one of the world's greatest musicians whom I love with all my heart."

A narrow staircase leads to the lobby on the first floor. Here stands an empty, white upholstered chair with a cord around it. To the right is a large hall dominated by a dais. Some 25 students saunter in silently, their instruments by the side. Someone lights agarbattis and diyas at a small shrine in the hall. At 5.40 pm, there's a buzz: Baba is here. Dressed in an off-white kurta-pyjama, holding a Dunhill cigarette, Khansaheb moves towards the white chair. The cord is untied, Baba slowly lowers himself into it. The students come in a queue, awaiting their turn to pay obeisance at their master's feet. Later, Khansaheb laughs about the only discordant note: "Smoking is a small pleasure. All the old famous musicians used to smoke."

As you scan the overtly Hindu images on the walls, Khansaheb sees your inquisitive eyes and explains, "Music comes from Brahma and Saraswati. I always offer my prayers to the gods in the morning." The class begins, he walks to the dais and loses himself to tuning his sarod. In the front row sits his 19-year-old son Alam, rapt.

"Jai Guru," the maestro chants in his deep, resonant voice, and asks the students to play the raga they'd learnt in their previous class. Ears are tuned to discern even the minutest deviation from perfection, his voice occasionally echoes: "Reduce"; "melody", "off-beat"; "again, one, two"; "off-beat."

"You can see his creative virtuosity in the way he develops the ragas," says a student later, in reverential tones. "Anybody can open a book and figure out the raga structure but to transform that into a mood is a rare gift."

Over the last 35 years, Ustad Ali Akbar Khan's institute has flourished, attracting students from Bay Area and elsewhere in the US. Initially, the students were mostly Americans; now Indians also form a percentage. There is, for instance, Dr Udayan Bhaduri, 56, a cardiologist who came all the way from Florida eight months back and rented a place near the school to learn music from Baba. He plans to return here again next year. Texan Jason McKenzie is a struggling rock musician who last year spent his first summer at the school, learning tabla from Pt Swapan Chaudhari. There's Andrew McLean who has been a student here for the last six years; he now wants to teach tabla in New Orleans, the world's jazz capital.

All sorts frequent the school. Every summer beginning 1978, John Bell has been making his musical pilgrimage here, travelling overland all the way from Washington in his 'recreational vehicle'—complete with bed, cooking range and washroom—to learn the flute and the sitar. Sixty-year-old handyman Terance Pease has been learning the sarod from Khansaheb since 1966. Dressed in blue jeans and a shirt, Pease belies the popular image of a Hindustani shastriya sangeet disciple. But no matter what happens, the handyman strums the sarod for an hour daily.

The interest his school has generated in Indian classical music, and the sheer respect the Ustad commands here, should come as a salve to the memory of his efforts in India. He had initially begun in Calcutta but had to down shutters for lack of funds and encouragement. Then Menuhin invited him in 1955 to the US; he was subsequently to become a regular visitor. "Those days people had no idea about Indian music. It is not like now," he says.

In '65, Khansaheb began teaching in Berkeley. Two years later, he found enough music lovers and patrons among locals to pool in money for a college. "I rented places all over Marin County at scout camps, churches, etc, before moving to the current location about 22 years back," reminisces Khan. Those were the days of Beatlemania, anti-war protests and flower children. The Sixties' yen for alternative cultures and its 'spiritual' turn did help in the process of arousing curiosity and attracting students. But Ali Akbar Khan did not admit the globalising effect of pop culture into his core art, and never succumbed to the temptation of teaching fusion music.

Khan's dream has flourished, prompting him to open two branches—one in nearby Fremont and another in Basel, Switzerland. Ask him about his success in the US and the time in Calcutta, and he can only mutter: "In Calcutta I didn't get any help with the college. But here I have had 10,000 students come to this college alone."

This Calcutta episode is an ironic aside in the story of Hindustani music; his father, the great Baba Allaudin, was the one figure who took teaching of classical music—beyond the fold of familial transmission—to great heights. His Senia Beenkar gharana, from which has emerged a whole pantheon of contemporary greats, was where Ali Akbar started learning at age three. Later, his riyaz often lasted 18 hours. He'd go to bed dressed, hoping to be dot on time for riyaz at 4 am. "'Ali Akbar!' my father would call out in the morning," recalls Khan. "I always had the sarod at hand, when he called the first time, I'd be out of the room, by the second call I'd be near his living room and by his third I'd be by his side."

He debuted at 13, then became the court musician at Jodhpur. This gave way to offers to compose for films—his first was Chetan Anand's Aandhiyan, followed by Satyajit Ray's Devi and Khudita Pashan. "My father was very angry that I was doing music for films," he recollects. "He called me 'tajya putra' (disowned)." Unfazed, Ali Akbar convinced his father to see Khudita Pashan. "He reluctantly agreed since it was based on a Tagore story. I was nervous. At first, he was on the edge of the seat as if ready to leave any minute. But soon, he slowly slipped back and made himself comfortable. " At the end of the movie, his father told him gruffly, "Ok do more."

Ali Akbar had a reason for having a go at film music. He wanted "rickshawala and tangawala to listen to this pukka music—that was the only way they could listen to it." He wanted to take classical music to the street. It's only a poignant irony now that he has taken it all the way to the United States.