Handing over the Tehelka inquiry to CBI is encouraging; now for real reform 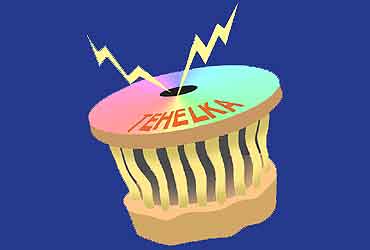 outlookindia.com
-0001-11-30T00:00:00+0553
Actions speak much more loudly than words. The government's quiet decision to wind up the Phukan Commission on the Tehelka tapes and turn over the inquiry to the CBI has done far more to reassure ordinary Indians about the sincerity of its intent to reform the political system than any torrent of declarations from its leaders could have. The decision serves to remind us that at its root, the Tehelka tapes were about something very simple—large-scale corruption in the purchase of arms by the Indian government. This is a criminal offence. So it should, from the outset, have been investigated by the police.

The Vajpayee government's decision to set up a judicial commission to investigate the charges was nothing but sheer obfuscation. From the day it was set up, its purpose was as transparent as sheet glass—to deal with so many extraneous issues that the core issue was completely obscured. In the three-and-a-half years that the investigation has dragged on, the commission, first under Justice Venkataswami, and then under Justice Phukan, has examined every conceivable issue except the central one that was revealed by Tehelka's video camera.

Instead, the government put Tehelka's investigators in the dock for impersonation, offering bribes to army officers and political parties, for employing women of questionable virtue for the task, and a host of other alleged misdemeanours. It launched an extensive inquiry into Tehelka's finances and its possible links with anti-national elements, and bluntly accused it of having doctored the tapes. When Tehelka performed a similar sting operation to expose the clandestine trade in tiger and leopard skins, the government pounced upon its correspondents with charges of becoming accessories to the slaughter of the predators in order to make a story.

In the process, it cut off Tehelka's access to funds, tied up its editors in litigation, and forced the e-newspaper to close down. Not content with destroying Tehelka, the government also decided to make an example of Tehelka's supporters and financial backers. Within days of Tehelka's airing of its videotapes to the media, the government accused First Global, a rapidly growing Mumbai brokerage house which had invested a small sum in the start-up of Tehelka, of having conspired to fix sharemarket prices after the announcement of the budget. With the help of a complaisant head of sebi, it stopped it from doing business "pending the inquiry". The inquiry itself was prolonged for more than a year, during which First Global virtually closed down and 215 employees lost their jobs.

When it became clear that the charges would not stick, the government arraigned the founder of the company, Shankar Sharma, on vague charges of violating the Foreign Exchange Regulation Act, and kept him in prison for a full 60 days while the police struggled to frame a non-existent case. By the time Sharma was released, the whole of the investor community had got the message—challenging India's criminal polity was dangerous, for its members knew no mercy.

Sending the case to the CBI brings the central issue back into focus. But this is only the beginning of the clean-up job that lies ahead. In the past, the CBI's independence too has been questioned on more than one occasion. It has frequently been accused of taking its instructions from the home ministry, and dragging its feet on politically sensitive cases. On this occasion, the government needs to ensure that no one can accuse it of using its authority over the CBI to turn the case into a political vendetta against the NDA.

Nor can the clean-up stop there. The root cause of the corruption and extortion that now riddles the political system and the bureaucracy is the political parties' never-ending need to raise money to fight elections.Individual politicians and officials may well be corrupt. But had Indian democracy not refused to recognise the political system's need for operational resources, the presidents of two of the country's ruling parties would never have felt constrained to accept contributions from such dubious sources for such questionable purposes.

This need has to be recognised and catered to, for the consequences of not doing so have been amply demonstrated over the past half century. The best way to do so is to follow the example of several European countries and set up a generously endowed state fund for financing political parties that is based upon their share of the vote in the preceding election. Corruption and criminality are so well entrenched in the political system that this will not eliminate either at a single stroke. But it will cut the cord that binds politics to crime and black money, and forces the leaders of all political parties to be beholden to the worst elements in our society. That will clear the way for further reform.

The need for state funding has been recognised more than once. It was first urged upon Mrs Indira Gandhi by a group of Congress parliamentarians as far back as 1976. Since then, it has been a staple offer of all political parties while they have been in opposition. But for some reason they have lost their appetite for the reform the moment they have come to power. The BJP was no exception to this rule. One can only hope that the Congress, which inscribed it in its common minimum programme, will now prove an exception to the rule.