It's too prolonged now to be called a correction. Investors are finding ways to live with a bear market. 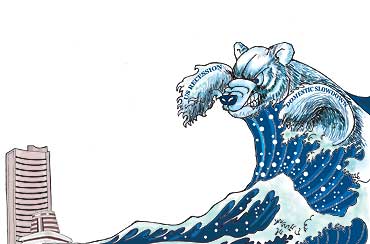 Once, we were decoupled. Now, we are clearly not.
Once, we had the India growth story to fall back on. Now, that is showing signs of wear and tear.
Once, we were searching for the Budget, or anything, to stem the market's fall. Now, fresh limits are being tested on a daily basis.

So here it is: all bets are off. Two months after the Indian stockmarket began its dramatic downward slide, it continues to remain volatile and vulnerable. In the past couple of weeks, the Sensex has shed 7.92 per cent, making it a staggering 27.58 per cent fall since the peak of 21206 on January 10. The scene in the mid-cap and small-cap space is far worse. With no light at the end of the tunnel, the mood has become sombre. Call it the election year effect or the glimmer of a slowdown, but it must now be asked: Are we entering a prolonged bear market?

That's a question few are willing to take on. Most analysts and brokers still prefer to call the savage market fall a correction. On the other hand, no one is talking of a remarkable recovery anymore, instead, taking cautious positions - and yes, some have even said the Sensex could go down to 12000. A recent report by Merrill Lynch states investors are largely bearish on the market. To quote: "We have seen the January lows already earlier than our expectations of April. We do not believe we have seen the lows for the year yet." 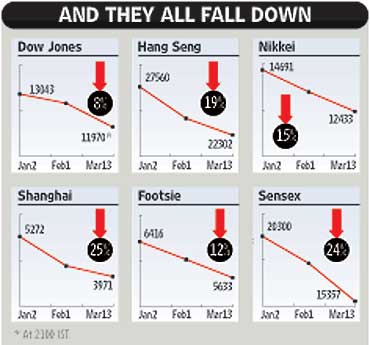 Clearly, the downward sentiment has overtaken everything else. Says Shankar Sharma of First Global Securities: "The current situation has nothing to do with India. It is part of a bear market which is working across the world. Every market is suffering and India is a part of it. Looking at the situation, 15000 is still a very high level. If the global slowdown continues, it could go 30 per cent lower than this." Apart from further confirmation of a recession in the US, the markets have woken up to a sense of slowdown in the Indian economy. Adds Dhirendra Kumar, CEO of mutual fund tracking firm Value Research: "We have gone back to the September 2007 levels and the market will take a while to recover. It looks like a prolonged correction, but the start of a bear phase cannot be ruled out."

But the overall mood continues to be unchanged after the US Federal Reserve decision to pump in $280 billion into the global credit markets. One commentator likened it to prescribing "a cough medicine to cure pneumonia". In any case, the Fed's moves to cut interest rates did not restore large-scale confidence to the Indian markets, even if there were short-time rallies in celebration. Says Vishal Sanghavi, analyst with Networth Stock Broking: "The markets may fall further because most of the US solutions are short-term. By cutting rates, the US is not increasing liquidity in the market and money supply is not increasing significantly." Add the sinking dollar and increasing crude oil prices to this messy cocktail.

Domestically, the dismal figures of industrial growth for January - particularly those of capital goods - was taken badly by a market that has suddenly developed a keen interest in India's macro-economic numbers. Says Amitabh Chakraborty of Religare Securities: "Till now, India has been sold on the GDP growth story. But we think India's GDP growth is slowing down. This will lead to a fundamental shift in the investors' stance towards India. " Of course, the biggest concern is rising inflation and whether this would stall an expected cut in interest rates. According to Merrill Lynch, inflation will continue to be a concern and will remain above 5 per cent for the year.

Also, the budget didn't lift investor sentiment. Says stocks analyst Devangshu Dutta: "The lack of measures in the budget served up a 'going nowhere' situation. This status quo can hurt." Moreover, there is a general acceptance among investors that India's general elections are around the corner - that's why no one is willing to take a big position in the market. Says Dutta: "In the last year of any government, we have rarely seen a bull run in the markets. Historically, a period leading into a general election is always turbulent. We have seen this during 1995-96 and in 2003-04. We may be seeing that scenario now...all investors will continue to be wary."

So, will the market fall further? Many feel the market had not hit the bottom yet and could see a further fall in the coming months, thanks to uncertainties around the Indian economy and polity. Says Religare's Chakraborty: "Our calculation shows that a Sensex level of 14000 can be justified. It depends on the GDP growth figures. If growth comes down, investor confidence will be further hit." Pointing to the possibility of poor corporate earnings for the quarter ending March, Value Research's Kumar feels that the market has room to go down by another 10 per cent from the current level. But, true to form, a short-term rally is not ruled out. States the Merrill Lynch paper: "This could be triggered by an improvement in global markets on Fed action and a compensation package for banks towards the farm loan waiver that pleases the market."

Moreover, market regulator sebi's data shows that foreign institutional investors - the bulk buyers who were instrumental in pulling the market down in the last two months - sold more local shares than they bought this month. Of late, however, they have turned net buyers. Analysts are not convinced, and feel that with the US sub-prime issue still alive, FII exposure may not increase in the coming months. This is visible from their low exposure in derivatives, while others argue that the FIIs have shifted their portfolios into safer debt.

In any case, because of the sentiment in the markets, retail investors are unlikely to take the FII cue so easily. Says Ashith Kampani, MD, JM Financial: "In a normal situation, FII inflow leads to follow-up buying by domestic investors. But due to the steep correction and losses, a combination of limited players, low volumes and relatively high volatility is keeping small and retail investors away." The under-performance and low recoveries in small- and mid-cap stocks reflects this.

For more proof, look no further than the IPO market. A couple of months after major IPOs like Reliance Power, Emaar MGF and Wockhardt faced poor listings or had to be withdrawn, the situation continues to be grim. Even the much-anticipated IPO of Rural Electrification Corporation, which was expected to break the jinx, did not perform up to expectations as retail investors and high net-worth individuals largely stayed away. Says Dutta: "Frankly, the situation looks pretty bad in terms of projections of money to be raised from the market in the near future. IPOs are influenced much more by retail subscription and there seems nothing left in the market for retail investors at the moment." Of course, as long as IPOs are priced right, they will succeed. Right now, retail investors are just not biting.

So, where does that leave the markets? Giving its take on the sentiment, Merrill reports: "There was a mixed feeling - some were positive on India, given the defensive nature of the market. Others were negative in the short term, given that India had been such a strong out-performer and valuations were still relatively high." The worry is that while most expected the market to stabilise at around 16000 levels, that floor is being tested again and again. Some players remain optimistic. Former BSE ED M.R. Mayya feels the market has already hit its bottom and can only go up from here. Says he: "The market is already on a recovery mode and gains are becoming visible every day. Just wait till the monsoons and for the corporate results to come in. This phase of correction will be over soon and the market will bounce back."

Sure, there have been rallies, but nothing that will be able to even begin restoring the majestic levels seen in the beginning of the year. Most experts agree that the market will fall further. Hopefully, it will find a level to defend. Says Kampani: "I believe it is testing time. Indian investors need to be more patient in approach, use the correction to accumulate and allow the market to stabilise. They should not panic." After years of a spectacular bull run, a lot of people have forgotten what a bear market is really like.