Urban, Rural, Or In Transit? It’s Still Raptor and Prey

A commute home that ended in a nightmare of rape, death

On February 1, 2011, a little after 8.30 pm, the commuters on the Ernakulam-Shoranur passenger train saw someone falling off the train just after it left Vallathol Nagar, near Shoranur, Kerala. One of the commuters said he had heard a woman’s cry for help as the train slunk into the night. The commuters reported the matter to the station master at Shoranur. Twenty-three-year-old Soumya’s naked body was found in the woods near the railway tracks. Unconscious and bleeding profusely, she was taken to the Thrissur Medical College where she succumbed to her injuries five days later.

Hailing from the small hamlet of Manjakkad near Shoranur, Soumya was working as a sales girl at a mall in Kochi. The “unsafe” city, she survived  for five years. It was in the countryside that she was stalked, ravaged and killed by a beast.  Soumya had boarded the ladies compartment of the passenger train that night at Kochi to go home. That compartment had emptied at Thrissur, and she found herself alone. With the passageway between the ladies compartment and the general compartments closed, “she had alighted from the train to get into the next bogie,” says her mother Sumathy, a household maid at Shoranur. “But even that was a ladies compartment and cut off from the rest of the train.” Also having boarded the train was Govindachamy from Tamil Nadu, whose left palm had been amputated. There was no railway personnel or police on that train. 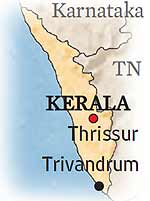 An amputee, Soumya’s attacker smashed her head and crushed her fingers in the door before raping her.

No one knows the exact sequence of events, but Dr Shirley Vasu, who was then head, forensic medicine, Thrissur Medical College, and had testified before the Thrissur fast-track court about the post-mortem report, pieces together for us a rather chilling chain of possible acts: “In Soumya’s case we could glean the sequence of events from her injuries. The rapist, who did not have one palm, grabbed her neckline and pulled her towards him. He twisted her left wrist, grabbed her hair and smashed her forehead against a hard surface several times, leaving Soumya dazed. He then crushed her fingers between the door jambs. She was sexually assaulted in a violent manner. She was then either pushed off the train or fell off. She fell on the adjacent tracks and went into coma. Fourteen of her teeth were missing. She was bleeding profusely. There were nail marks on the left side of the body to indicate her clothes had been ripped off.”

Strangely, Govindachamy, who claimed to be a beggar, had hired a Mumbai-based lawyer. During the trial, there were reports of some collusion between the assistant professor of the forensics department and the defence lawyer. Says A. Suresan, special prosecutor, “There were attempts to tamper with the post-mortem report but Dr Vasu had recorded the post-mortem on two cameras and used that in court.” The fast-track court awarded Govindachamy a death sentence after a swift trial in November 2011.

However, not all rape cases get speedy trials. The 1996 Suryanalle case where 42 men sexually assaulted a minor for 40 days is still awaiting the final verdict from the Supreme Court. The trial court had in 2000 convicted 35 of the accused but the Kerala High Court in 2005 acquitted all except one and reduced the sentence to just five years. The judge said that the girl had ample opportunity to escape but did not. The government had given the victim a job as a sweeper in a government office. There is also a case against her for misappropriation of funds. Activists say this is to demoralise and harass her.

As for the question whether rapes are more an urban phenomenon than a rural one, crime records in the state show that there are more rapes in the countryside. Activists say it could be still higher as rape in rural areas go unreported most of the time.

A Primary Textbook in Resident Evil