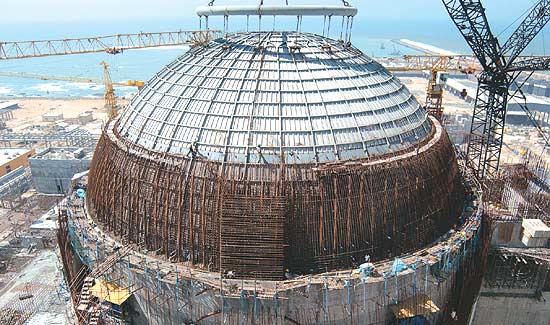 In the race to grab their share of the emerging nuclear market of India, Russia and France have established a substantial lead over the US. Ironical, isn’t it? After all, it was the US that had deployed its formidable persuasive powers to secure a waiver for India from the Nuclear Suppliers Group (NSG) a year ago, thereby opening the door for New Delhi to participate in civil nuclear energy commerce with the rest of the world.

Following the NSG waiver in 2008, India has signed three agreements on nuclear cooperation—the first was the 123 agreement with the US, followed by a deal with France early this year. Last week’s Inter-Governmental Agreement (IGA) between India and Russia in Moscow was the third. “The Russia one completes the set of agreements we wanted with our major suppliers,” a senior Indian diplomat said.

India and the USSR had first signed an IGA in 1988 for the construction of the nuclear power plant at Kudankulam, Tamil Nadu—though the project took off only after a decade. Last year, another agreement was signed for additional reactors at Kudankulam. The present one is an ‘umbrella agreement’, providing for enrichment and reprocessing technologies and guaranteeing uninterrupted fuel supply for the reactors already in operation. Says foreign secretary Nirupama Rao, “The agreement provides for upfront consent for reprocessing of spent fuel and also includes a provision that any termination will be without prejudice to ongoing contracts and fuel supply obligations.” The Indo-French agreement too shares these provisions with the Indo-Russia nuclear deal.

By contrast, the Indo-US nuclear deal has a condition asking for return of fuel and equipment should the cooperation terminate. Also the fuel supplied by the US can be reprocessed at a dedicated facility in India, subject to an agreement which the two countries are still negotiating. Why hasn’t the US demonstrated the same alacrity and generosity towards India as have Russia and France?

Because America’s domestic legislations prevent Washington from making such sweeping commitments; neither Russia nor France suffer such constraints. They’ve been quick off the block to grab their shares in India’s nuclear bazaar which is estimated to be worth billions. Of the 28 light water nuclear reactors that India plans to build, 12 are to be sourced from the US, 10 from Russia and the remaining six from France. If the US continues to drag its feet, the Russian and French will obviously have an edge. A host of US power companies, recently in India to probe the nuclear market, were said to be lobbying hard with their government to expedite the negotiations with India for implementing the 123 agreement. The IGA will be an additional spur to goad the Obama administration into prompt action.

Interestingly, officials say some countries are interested in tapping India’s design and technology in developing nuclear reactors. A case in point is Canada, which had supplied India the CANDU reactors. Over the years, though, Indian scientists have developed their own reactor, popularly known in some circles as indu. Not only is Canada interested in supplying nuclear fuel to India, it has expressed interest in Indian reactors and the possibility of exporting it to a third country.