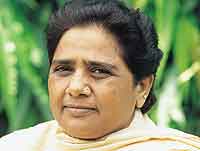 THe BSP is rolling out the red carpet for sworn enemy—the Brahmins. It’s even reworked its slogan—Tilak taraju aur talwar, inko maaro joote chaar is out, replaced by Haathi nahin Ganesh hai, Brahma Vishnu Mahesh hai—to make the party more upper-caste friendly. Going full-steam ahead are Brahmin sammelans in nearly a dozen venues including Allahabad, Gorakhpur, Gonda, Sultanpur and Pratapgarh. Another big meet for Brahmins is scheduled for mid-April in Lucknow. BSP general secretary S.C. Misra, MP, has been entrusted with this task of image change. The party, which entered the UP political spectrum on an exclusive Dalit plank, has realised the need for broadbasing. In the 2004 parliamentary polls, the BSP gave five tickets to Brahmins, only one won. In the Vidhan Sabha polls, it fielded as many as 26 Brahmins though only half-a-dozen could win. The sammelans, it seems, are a bid to improve the scenario.

Let's Not Go There