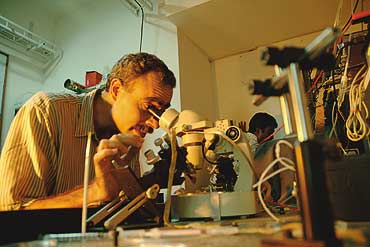 outlookindia.com
-0001-11-30T00:00:00+0553
Upi, as he is known at the National Centre for Biological Sciences, Bangalore, is asking a fundamental question about the brain. And he uses his favourite tool, the sense of smell, to answer it. How does the brain take in information? And a series of sub-questions. How do animals recognise odours fast? How can they locate smell accurately? "Smell is the simplest of all senses where only a few parts of the brain are involved. But it’s important in setting the context for many emotions, something which the perfume industry takes advantage of." It also helps scientists understand higher-order processes like learning, because smell has a strong effect on memory. So, Upi has built olfactometers—machines that make precise measurements about the intensity of the sense of smell and deliver precise stimuli, sometimes just a single stimulus. His team forms the core numerical group in the development of one of the most widely used neural system simulators in the world, Genesis. His big worry now is that the university system in India is depleted of its rigour, research interests and funding. "There is no cross-fertilisation in India," he laments. He’s doing something about that too. Upi is part of a novel iBio programme at NCBS—beginning this year—which will invite masters and doctoral students from all disciplines to work in biology.