Up To All Coquetry

Bollywood isn't shy when it comes to exploring taboo love 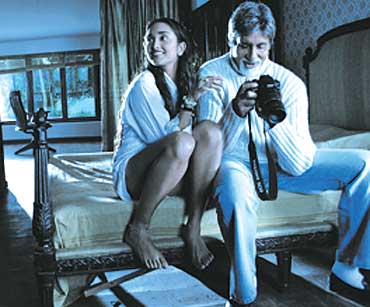 'There is an extraordinary love story in every jodi' proclaimed the publicity for Rab Ne Bana Di Jodi, Aditya Chopra's box-office winner, which marked his return as the high priest of Hindi film romance -- a position he first won with Dilwale Dulhania Le Jayenge. Jodi broke the mould in more ways than one; and sometimes disturbingly so. Anushka Sharma is forced into a marriage with well-meaning dweeb Shah Rukh Khan, but cannot bring herself to love him, thus prompting him to get an alpha male alter ego who sweeps the girl off her feet. Alas, Khan's character is so disturbed by this that he develops a feeling that his wife is cheating on him with another man, conveniently forgetting that his wife's lover is none other than he himself. If we factor in the fact that Anoushka's character is fooled by the removal of spectacles, a moustache and the addition of hair gel and gaudy T-shirts into believing that her lover is a different man, we have here a couple who would keep an army of shrinks in business for years.

The annals of Hindi popular cinema are littered with romances that are atypical, if not quite reaching the bizarre heights of Jodi. Given the history of the subcontinent, one of the fascinations for filmmakers has been the Hindu-Muslim romance, a subject forbidden enough for directors to turn to again and again. While films like Anil Sharma's Gadar, Yash Chopra's Veer-Zaara and Randhir Kapoor's Henna took the safe way out and made the male Sikh/Hindu and the female Muslim (and Pakistani to boot), Chandra Prakash Dwivedi, using Amrita Pritam's excellent novel as a base, turned the tables in Pinjar and made the male protagonist (Manoj Bajpai) a Muslim whilst Urmila Matondkar played the Hindu female. Recently, Ashutosh Gowariker followed suit with Jodhaa Akbar where the Muslim emperor Akbar (Hrithik Roshan) marries the Hindu princess Jodhaa (Aishwarya Rai-Bachchan) in a strategic alliance. Interestingly, while the Chopra and Kapoor films are treated as straightforward romances, with the protagonists swearing undying love for each other fairly quickly, in Sharma's, Dwivedi's and Gowariker's films at least one half of the couple has to learn how to love the other over some period of time. 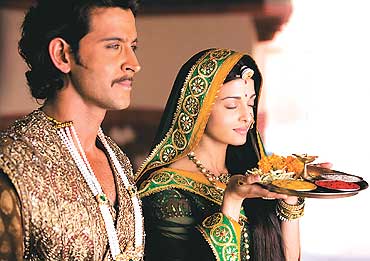 Hrithik and Aishwarya in Jodhaa Akbar

So, on to the love that dare not speak its name, namely incest. In Raj Khosla's Bambai Ka Babu, due to various circumstances, Dev Anand has to impersonate someone and he falls in love with that character's sister Suchitra Sen, leading to an incest scenario, which, of course, is not real. Similarly, in Ravi Chopra's Zameer, the impersonator Amitabh Bachchan falls in love with his 'sister' Saira Banu. These however, were contrived circumstances. A far more real scenario was enacted in J.P. Dutta's underrated Yateem, where Sunny Deol's foster father, Kulbhushan Kharbanda, marries a much younger woman, Sujata Mehta. The trouble is that Deol's new stepmother lusts after her virile, handsome, muscular stepson, makes advances to him and cries rape when spurned. A potential incest quagmire was explored in K. Balachander's Ek Nai Paheli, a remake of his own Tamil film Apoorva Raagangal. Here, a young Kamal Haasan falls in love with the older Hema Malini and they plan to marry. But, throwing a spanner in the works is the revelation that Hema's daughter Padmini Kolhapure is planning to marry an older man Raaj Kumar, who happens to be Kamal Haasan's father. Incest, real and not contrived this time, happens in Sukhwant Dhadda's Ek Chadar Maili Si, where after the death of his elder brother, Rishi Kapoor is forced to marry his sister-in-law Hema Malini, whom he had always looked up to as an elder sister.

Another Paheli, or conundrum, is posed by director Amol Palekar in his adaptation of Viyayan Detha's story, earlier adapted by Mani Kaul as Duvidha. In this scenario, a newly married Rani Mukherji is distraught when her husband Shah Rukh Khan has to go away on business for five years. Much to her delight, he returns in a few days, but she doesn't know that in reality it is an infatuated ghost who has taken her husband's shape. Love blooms between the ghost Khan and Mukherji and soon she is pregnant. Of course, matters come to a head when the real husband returns. 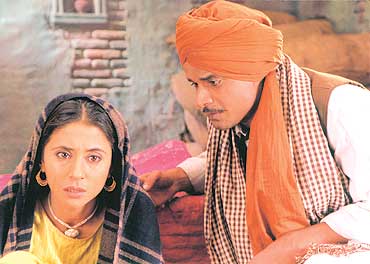 The older man-younger woman theme and vice versa is another well-explored topic amongst Hindi filmmakers. In Ramesh Talwar's Doosara Aadmi, the older Rakhee falls in love with the younger Rishi Kapoor as she sees in him elements of her deceased husband Shashi Kapoor; while in Farhan Akhtar's Dil Chahta Hai, Akshaye Khanna is smitten with the older Dimple Kapadia. On the other hand the 60+ Amitabh Bachchan falls for the 30-something Tabu in Balki's Cheeni Kum and the 18-year-old Jiah Khan in Ram Gopal Verma's Nishabd. No slouch in the older man stakes, Victor Banerjee is attracted to the much younger Perizaad Zorabian in Anant Balani's Jogger's Park.

Hindi films have also explored different aspects of love within the confines of a marriage. In Basu Chatterjee's gentle Piya Ka Ghar, the newly married Anil Dhawan and Jaya Bhaduri are very much in love, but are unable to consummate their relationship, living as they do amidst a joint family in a tiny apartment. In Manik Chatterjee's Ghar, matters are altogether more serious as married couple Vinod Mehra and Rekha must rediscover their relationship after she has been abducted and gang-raped. The presence of an ex-boyfriend within a marriage has been explored in films like Basu Chatterjee's Swami, Bapu's Woh Saat Din (based on K. Bhagyaraj's Andha Ezhu Natkal) and Sanjay Leela Bhansali's Hum Dil De Chuke Sanam where Shabana Azmi, Padmini Kolhapure and Aishwarya Rai respectively must choose between their boyfriends (Vikram, Anil Kapoor and Salman Khan) and their husbands (Girish Karnad, Naseeruddin Shah and Ajay Devgan). In these cases conservatism prevails and the staid husbands are chosen over the maverick boyfriends. 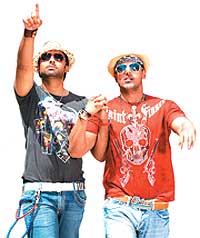 And finally, on to the love that dares speak its name in Hindi cinema these days -- homosexuality. While films like Deepa Mehta's Fire and Karan Razdan's Girlfriend have portrayed lesbianism head on, and Kamal Amrohi's Razia Sultan portrayed Parveen Babi erotically caressing Hema Malini, their male counterparts have been rather more coy, usually mining the theme for laughs rather than issues. Abhishek Bachchan and John Abraham managed a convincing pretend gay act in Tarun Mansukhani's Dostana, and Shah Rukh and Saif Ali Khan's so-called gay subtext in Nikhil Advani's Kal Ho Naa Ho was hilariously sent up by the actors themselves at the Filmfare Awards. On a more serious note, Onir tackled homosexuality and HIV in My Brother Nikhil while Sridhar Rangayan's Gulabi Aaina, which focuses on two transsexuals and a gay teen trying to seduce a straight man, remains banned in India. Mahesh Dattani's English-language gay-themed Mango Souffle, starring Atul Kulkarni, remained largely unseen in India. As for the central male-male relationship in India's most celebrated film Sholay, it is best described in the words of Ted Sheen, writing in the Chicago Reader who says, "the male bonding borders on camp." To add to this debate, Sunaina Kumar, writing in the Indian Express, heralded the rise of the 'Bhai-sexual' in Hindi films saying, "The Bhai-sexual shares a chemistry with his best pal that often even overshadows his chemistry with his lady love."

Naman Ramachandran is the author of Lights, Camera, Masala: Making Movies in Mumbai. A shorter, edited version of this appears in print