After the resignation of six TRS ministers, what's their chief's next move? Updates 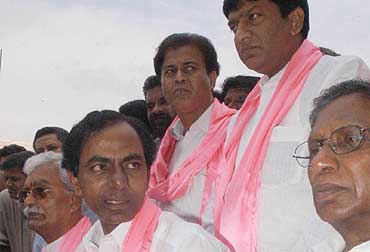 outlookindia.com
-0001-11-30T00:00:00+0553
Telangana Rashtra Samithi (TRS) chief K. Chandrasekhara Rao's habit of taking unilateral decisions often leaves his followers confused. It was no different last week when he ordered six TRS ministers to pull out of the Y.S. Rajasekhara Reddy-led Congress government in Andhra Pradesh. Reason: the Reddy government was dragging its feet on the creation of a separate state for Telangana. However, he added a twist to the tale by deciding to stay with the UPA government at the Centre.

While the TRS decision to distance itself from the Congress government has been by and large welcomed by party supporters, they are upset that Rao and A. Narendra (Union minister of state for rural development) chose to continue in the central cabinet. "We are in consultation with UPA chairperson Sonia Gandhi and PM Manmohan Singh. So, first we need to see where those deliberations lead," party leader G. Vijayarama Rao said. Till he was asked by his chief to put in his papers, he was the state civil supplies minister.

His colleague, state transport minister S. Santosh Reddy, highlighted the "incongruity" of Rao's decision and revolted by refusing to join the other ministers in handing in their resignations to Governor Sushilkumar Shinde. However, succumbing to pressure later, he, too, agreed to resign once the chief minister returned from his ongoing foreign tour.

The TRS's decision to pull out came hours before Reddy was embarking on his three-nation tour of Egypt, the UAE and Israel, which includes a pilgrimage with his family to Bethlehem. Unfazed by the resignations, Reddy, who was immediately consulted by the governor on what he should do with the resignations, responded that he would convey his decision on the matter at an "appropriate time". Reddy is in no hurry as the TRS pullout holds no imminent threat to his government. The Congress has 185 members in the 294-member state assembly—comfortably above the halfway mark of 147. The TRS has 26 MLAs and five MPs in the Lok Sabha.

The TRS has a long list of complaints against the state government and the CM. Despite the decision to jointly contest the assembly polls with the Congress, it has always been suspicious of Reddy. According to TRS leaders, the Rayalseema strongman is opposed to the idea of carving out a separate state for Telangana. "Our problem is the state leadership. It is anti-Telangana. It has been wasting our time and humiliating us," says Vijayrama Rao. The TRS alleges that Reddy had gone ahead with the Pulichintala and Polavaram irrigation projects to benefit coastal Andhra disregarding its objections to it. The fear is that these mega-irrigation projects will deprive the already rain-starved Telangana farmers of their share of water.

Another major sticking point has been the Naxal issue. The TRS has always been critical of the CM's failure to pursue peace talks with the Maoists. However, a more serious problem facing the party has been the mass resignation of its supporters following a direct threat to the TRS by the Maoists last month. Critical of the slow progress on the issue, the Maoists demanded that the TRS ministers resign their posts by June 15 or face dire consequences. The passing of the deadline was marked by the killing of a number of junior party functionaries, triggering a fear psychosis within the party which was followed by a flurry of resignations.

By quitting from the state government, the TRS leadership hopes it can not only blunt the Naxal threat but also regain political ground in Telangana. Leaders like former south Indian action heroine Vijayashanti are threatening to hijack its main plank by launching their own political outfits to fight for the homeland cause. Its other aim would be to pressurise the UPA to speed up the process of carving out a separate state. One area of concern has been the slow progress of the special UPA committee, headed by Union defence minister Pranab Mukherjee, constituted to examine the case for a separate state.

Meanwhile, other political parties are watching the unfolding political drama with much interest. While the TDP is totally opposed to any division of the state, a majority of the state-level BJP leaders are keen to jump on the pro-Telangana bandwagon. It remains to be seen if Rao will continue to be a reluctant ally of the Congress or shift his allegiance.