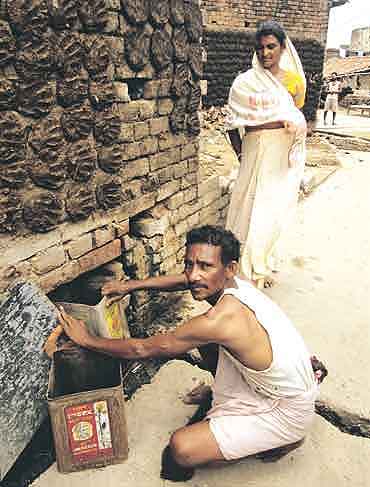 outlookindia.com
-0001-11-30T00:00:00+0553
The name, ironically, is Gandhi Mehtar. In his dingy, dirty settlement, he is one of the 6.76 lakh safai karamcharis (cleaners) in India’s official records. Manual scavenging was banned in 1993, but India is home to 96 lakh dry latrines where the human excreta of many is scooped out by the equally human hands of some. Gandhi dreams of an alternative profession for himself and his children. Sick of transferring shit from latrines into containers and carrying it on his head to a place far away for disposal, Gandhi Mehtar, in his 50s, tried to change his caste-ordained fate and learnt driving.

But nobody allowed him to touch their automobile. So back to scavenging. Another safai karamchari in Phulwari, Mohan Ram (25), last year opened a tea stall near a cinema hall instead of doing the traditional ganda kaam. "I purchased milk, sugar, tea packets, kettle and kulhars (earthen cups), prepared the tea but not a single customer came." Even fellow Dalits teased him: "Who will drink tea prepared by a Mehtar?" Mohan Ram uprooted the stall and is now a manual scavenger.