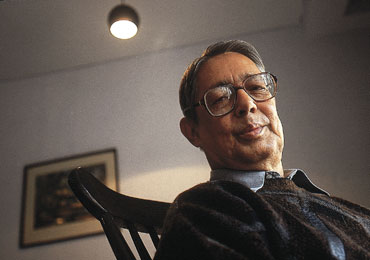 Antinomies of Society: Essays on Ideologies and Institutions
By André Béteille
Oxford University Press Pages 297; Rs 525
WHETHER it is the Babri Masjid issue, the question of religious conversion or even the ongoing tussle within the Bombay underworld where the 'Hindu' Chhota Rajan is said to be at war against the 'Muslim' Chhota Shakeel, public discourse tends to look at conflict as a problem between communities rather than a product of the State's failure to defend the rule of law and constitutionally-provided rights. In a society where the notion of individual citizenship is increasingly being subverted by religion- or caste-based identity politics, Andre Beteille's book comes as a refreshing defence of liberalism.

Although it has many strands, liberalism can broadly be defined as a concern for the rights of the individual over and against her/his community and the State; it stresses the need for a plurality of associations and ideas both as a good in itself and to check the power of the majority. While Beteille's essays are not so much prescriptive as attempts to understand the processes of change in Indian society—and some of his keenest insights come from recognising that social processes do not always move uniformly in one direction (the 'antinomies' of his title)—his own preference is for a society organised on liberal rather than communitarian or communist lines. Each of his essays, though devoted to different themes such as ideologies, intellectuals, civil society, governance and empowerment, is in some way concerned with the need to have autonomous institutions to balance each other, and to promote the concept of individual citizenship rights.

Beteille's central argument is that Indian society is made up of not only different castes, religions or linguistic groups, but by a variety of what he calls 'open secular institutions' such as universities, hospitals, banks and newspapers whose recruitment, at least in principle, is based on non-ascriptive criteria, and whose rules are framed on the basis of 'technical' requirements rather than on the basis of religious or political doctrines. He recognises that in practice these institutions are rarely as open as they should be, and that 'merit' often merely masks privilege—given that only the rich (usually upper caste) can afford the kind of education and coaching that enable entry into the civil service or engineering and management institutes. However, the solution to the imperfect functioning of these recruitment procedures is not to abandon the principle of open recruitment altogether in favour of caste or religious quotas to make them more 'representative' of society, for that would be to change the very nature of these institutions.

While a legislative assembly is meant to reflect different shades of opinion and different sections in society, and one may quarrel with the composition of one that does not, Beteille implies that being socially representative is not a responsibility of universities or of the bureaucracy. A university's business is to sustain creative research and teaching, just as it is the executive's mandate to implement laws and policies. Of course these are not the only functions one can envision for these institutions and Beteille recognises that a more representative university or administration would be 'more open and more sensitive in its approach to the larger problems of society.' Expanded representation, however, can be ensured through other ways such as universal primary education.

One institution of which Beteille has had long personal experience is the university. At least some of the decline in quality in India, he argues, can be ascribed to the relinquishment of academic autonomy in favour of uniformity in recruitment and promotions through the net exam and merit-promotion schemes. Basic research which should be the primary concern of universities is devalued with the push to make them more 'relevant' and 'job-oriented' by introducing computer courses, hotel management, and lately, even courses in Vedic rituals to meet the expanding market for pundits. One can only agree with Beteille that "universities were not created to serve either the State or the market; they were created to serve future generations."

What puts Beteille's whole project at risk, however, is the fact that the same processes which he sees as initiating a modern secular identity in the colonial period—the law, institutions like the army or the administration, publishing houses—in fact, further crystallised 'traditional' religious or caste identities. For instance, through the concept of martial races or the adoption of upper-caste custom as 'Hindu personal law.' Although he quotes Srinivas' argument that the same forces that promote secularisation, e.g. the spread of communications, can also facilitate the spread of religion, he himself does not adequately reflect on what this could mean for secular institutions and their functioning today.

But then this is the challenge that Beteille's work throws out to us.

The Pains of Creation