Home  »  Magazine  »   » Making A Difference  »  »  Under this mango tree, enlightenment goes by the name of Andher

Under this mango tree, enlightenment goes by the name of Andher 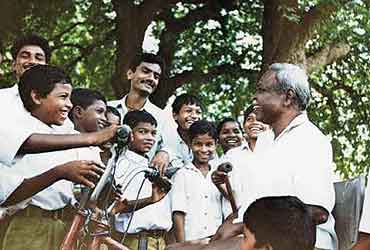 Vrunda Juwale August 27, 2001 00:00 IST Under this mango tree, enlightenment goes by the name of Andher

outlookindia.com
-0001-11-30T00:00:00+0553
Indulgent imaginations bordering on the fantastic are what dreams are made of. But there are a few who dare their dreams beyond those absurdly pleasant reveries. Physically challenged tribal Mahadev Savji Andher’s dream to educate his brethren has turned out to be that and more—a truth bigger than both reality and imagination.

He was not to be deterred even if it meant starting a school under a mango tree. And today, his dream has taken wings and the school has become a secondary-level education centre with 450 students, seven teachers and even a principal.

In an age of hi-tech communications, Andher’s Maharashtra Vidya Mandir—an under-the-tree institution running for the past 40 years in the tribal area of Talassari near the Maharashtra-Gujarat border—would probably sound archaic to many. But scratch the surface and, sure enough, obsolescence gives way to an edifying tale of provenance.

The Vidya Mandir, set up by Andher in the Sutrakar village of Thane district, Maharashtra, is a monument of single-minded determination, grit, courage and hard work of a lone ranger struggling against tremendous odds.

The fact that Andher, who himself had not attended school till he was 12, could dare think of such a project was nothing less than revolutionary. Particularly in a scenario where he wasn’t merely fighting a tradition obstructing his wishes but was also trying to tide over his physical impairment—loss of mobility due to a polio attack at the age of eight. Guruji, as he is fondly referred to by the villagers of Sutrakar, was immobile for two years, till he was 10. But his powers of keen observation enabled him to slowly turn the situation around. Says he: "I had seen people who looked different from us villagers. They were clean and refined in their behaviour. I wondered how there were two types of people in the same world. Grandfather said they came from the city and their appearance and behaviour were linked to their education. I decided to learn and educate people from my society." So, when his grandfather, a quack, tried to initiate him into the trade, Andher rebelled and announced that he would go to school and then teach others.

He began learning to walk by leaning on a stick, and soon enough started attending a school. Guruji passed the Maharashtra Primary Level Certificate exam in 1958. The following year he happened to meet social worker V.V. Patil who helped him open the school under a mango tree. "During monsoons we used to get some sheltered space from the village panchayat. Locals also chipped in and a hut was built to hold classes." With each passing year the school grew in strength. By 1976, Andher had to recruit teachers to keep up with the number of students. In 1992, a secondary section was added.

Two years ago, the Maharashtra Gopalan Samiti, which has been actively working to educate tribals in Talassari, adopted the school. So, now there are a few concrete rooms. But some classes are still held under a tree.

A walk around the school is a fascinating experience. From a smiling Guruji to a first-standard student, there’s happiness writ large all over. But for an urbanite, there are scarcities galore. There is no prayer hall. "This ‘par’ (a semi-circular concrete structure around a tree) is our prayer hall. It’s open air. It’s better, this way you are closer to God," Andher laughs it off. But the lack-list is long. There is no library for the village kids, no laboratory. Most of the students are in rags.

They are, nevertheless, curious. Sudhir Andher, Guruji’s son who is also the principal of the school, says: "Many of them have to walk 10 km to the school and back. Some of them have to cross an overflowing river during the monsoons."

Guruji points out that often the guardians are not amenable to the idea of sending their children to the school because they see them as helping hands on their fields. Says he: "We’re trying to find a solution so that the children aren’t deprived of education. We plan to introduce different courses for youngsters so that they can be trained in other vocations and earn a better living."

Guruji’s suggestion has been lapped up by all. Ask Shankar, a fifth-standard student, about his future plans, and pat comes the reply, "Khoop shikayachay (I want to learn a lot)." Mahadev Savji Andher can be contacted at Mukkam Sutrakar, Vedagpada taluka, post office Talassari, Thane, Maharashtra.