Renu Khator, Chancellor of the Houston University systems and president University of Houston, speaks about her journey, her approach to education and challenges she faces as a top administrator. 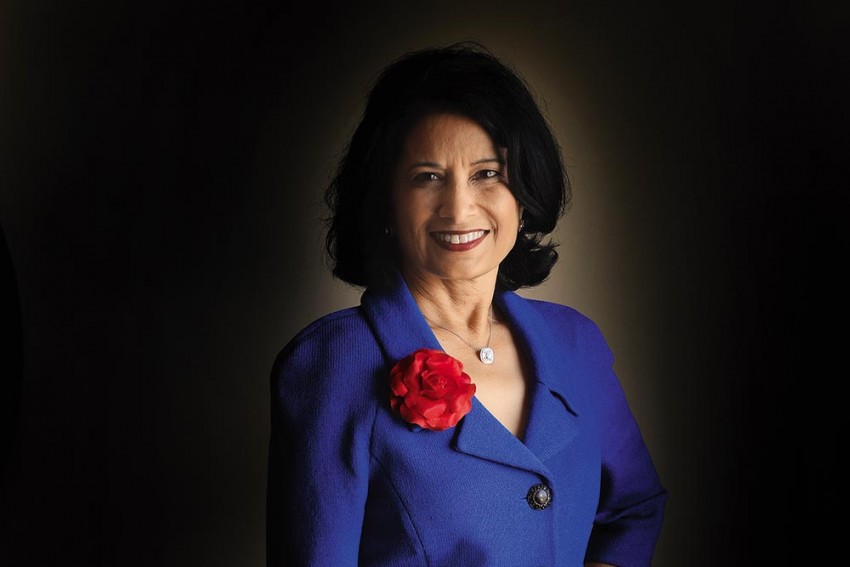 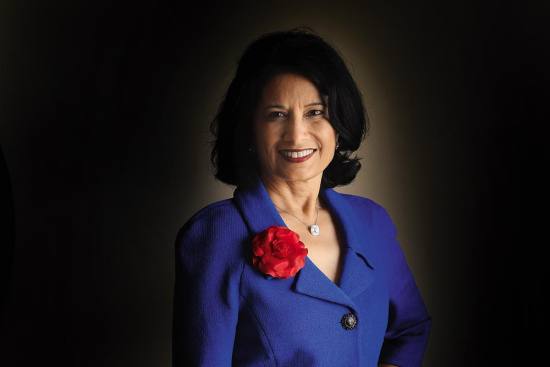 Renu Khator, landed in the United States with her husband and very little knowledge of English from Uttar Pradesh’s Farrukhabad when she was barely 19. Determined to pursue her studies, she managed to get admission in Purdue University in a master’s course. Through her own perseverance, unflinching support from her husband, Suresh, she is now Chancellor of the Houston University systems and president University of Houston. Today, at age 63, she is a prime example of what a woman can achieve if she properly nurtured, encouraged and educated.  She speaks to Pranay Sharma about her journey, her approach to education and challenges she faces as a top administrator. Excerpts:

It has been a long, fascinating journey from Farrukhabad to Houston. What would you say were the significant turning points?

The first turning point came when I got admission at Purdue University, the education that I got and the different doors it opened up. Had I not got that break I am not sure which direction my life would have taken. The second came while I was a professor and a friend who thought I had a knack for administration, suggested I go for an internship. Initially, I rejected it as I enjoyed being in the classrooms, researching, engaging, interacting with students

But finally you took it up?

I thought I can make an impact on public policy or university policy on a much larger scale. The first opportunity for that came when I became faculty assistant to the then university president. I learnt a lot, particularly the university’s connection to the community; its connection with the political, social world around it because universities don’t exist in vacuum.

‘I have very fond memories of Farrukhabad. I learnt consensus- building from my mother; leadership from my father.’

What was the lasting memory of the place that you came with when you arrived in the United States?

I had fond memories of Farrukhabad. I learnt the first lessons of diversity in Farrukhabad. It has a large Muslim population but also has a strong Hindu community. I saw how my father combined all different religions and different types of people. I grew up with all that and also saw how my mother managed the complex family undertones. So I leant consensus building from my mother and the art of leadership from my father.

But when you arrived in the US you could hardly speak English. How difficult was it to communicate with neighbours?

I remember an incident that took place six or eight weeks after my arrival. As I went down to the laundry in the basement of the building where we lived, I got locked out. It had started snowing and I was in housedress, a light sweater, socks and bathroom slippers. I didn’t have the courage to knock on any door and ask for help. I didn’t even know how to use a pay phone or ask money from anybody to make the call. Today, I would find ten different ways to help myself. But at that time I didn’t know what to do.

So what did you do?

I walked for more than a mile in that state through snow to my husband’s office. When I reached there and saw him, I burst out bawling like a little girl; I was so terrified. But that also tells you what kind of a person I was and the kind of endurance you need to survive in a different culture where you don’t even know the language.

And binge TV serial watching helped you learn the language? But in  your growing up period in India did you watch any English movies or English TV serials ?

No in my town we didn’t have any and it was mostly black-and-white television with perhaps two channels and they were in Hindi. We had one English newspaper at home but there were also four Hindi newspapers for my mother who loved reading newspapers. I would go for the Hindi newspapers. There was no exposure to any person from another country or to English that I would have or could have used. I read English books, but it was never a fun because they were so difficult for me.

‘As a 19-year-old, I’d have found it difficult to fight conservatism in India. So, going away to the US certainly helped.’

What was the most difficult part? Was it the accent, the way English is spoken there?

Since I did not hear much English while I was in India so I couldn’t make any difference on whether the accent was different. If you gave me a paragraph of English to read, I would read it and make sense of it. But beyond that I didn’t have much knowledge as I was not exposed to the language. So I started watching a lot of television, mainly there serial not the news or documentaries. And I finally got it. I think if you keep at something with determination and don’t quit, at the end you would be able to get it.

You are a bridge player. Is there a parallel between life and bridge?

Definitely, I think there is a parallel between life and the game of bridge and also between leadership and bridge. What it taught me is not to complaint about the hand that I have been dealt with, whether it’s in life or in the game. Just play your game. It doesn’t matter what kind of a hand you have been dealt, what matters is whether you play the game better than the others.

How many times do you say “pass”?

There are times you have to say “pass” it all part of leadership. You should know when to remain silent, when to listen and when to talk and lead. 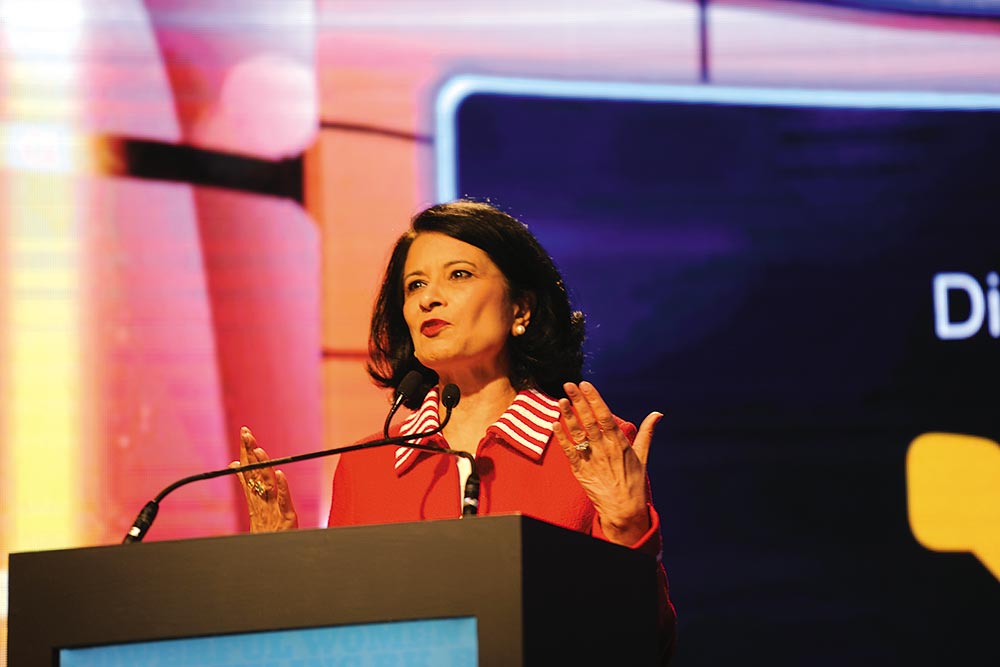 The US also has a strong conservative section. Are they any different from the one you see in India?

But the position you rose to and the power and influence you achieved in the US, could you have done it if you were in India?

From my personal experience, I would say no. However, when I see other women they have been able to achieve way more than what I have achieved. But in my context it would not have been possible. Women’s role is defined in certain way, not only in my family but also in my husband’s family—both being conservative Marwari families. Today a lot of people take pride in what I achieved. But there attitude was quite different and I as a 19 year old girl would have found it extremely difficult to fight against all that had I been in India. So going away from the country to the US helped. I think we managed to build a much stronger bond and understanding. As I said, my dream became a couple’s dream.

‘Quality education prepares you for life. If we give you skills to analyse things, I think we have done that effectively.’

How shocked were you with the culture in the US?

Exposure is a big education and it helped in shaping both my husband’s and my attitude. There were certain things that were shocking but I was also fascinated with them. Like people’s display of their affection in public. I was at a very impressionable age and there was a lot of room for me to grow and mould myself.

But higher education costs a lot of money in the US. How did you get the funds?

My husband was on a student scholarship he took a second job so that I could get my admission. But we realized we still had none for my tuition fee. So I went to the department and told them I wanted to withdraw. But my advisor tore up my application and arranged for an assistantship that paid for my tuition.

As a teacher and administrator what is your idea of an ideal campus life, should there by ‘red lines’ students should not cross in their debates and discussions?

Academic freedom and freedom of expression is very important as long as you have the patience and tolerance to hear the opposite side. A lot of problem happens when you are willing to speak your mind but don’t have the patience to hear what is in somebody else’s mind. I think in an ideal campus and university life you should be exposed to ideas you are not comfortable with. But many of the students who come into our campus are already connected with thousands of people in their cyber world. When they come to campus they are already connected. When we try and connect them with people from other countries and culture, they don’t have the need to build a network. So the challenge is how you make students disconnect from their cyber world and connect with real people in their campus life.

How diverse is the Houston University campus?

Houston is a very diverse city and celebrates success, irrespective of where you came from. Same spirit and culture exists in our campus. If you walk down from the library to the residential halls at any given point you can hear seven different languages being spoken. But the question is of inclusion. How do you make that diversity come together. I always say 2 and 2 can make four or zero, depending on the sign you put between them. But without any sign they become 22. That is the best kind of synergy.

‘For an educated person, empathy with another is important. Elitism should be knocked out during education.’

Are ‘radical’ ideas a challenge in the campus too?

We had some tension when there was this huge campaign through the social media by sections of African-American leaders on “All lives matter’ versus “Black lives matter.” It had a lot of tension borne out of national groups. But it was a challenge we had to deal with. Students were reminded constantly to speak. But sometimes they also pose the threat of physical violence. Those things are not tolerated. But anything other than that is always encouraged. Campus and academic freedom is about making you uncomfortable. On campus you are supposed to be exposed to ideas that makes you uncomfortable and ask’ that can’t be true.” Exposure makes you accept things that eventually jell together.

What is “quality education”?

It is something that prepares you for life. If you give text books and formulas to memorize and you forget them, then what is the point. But if we give you skills to analyze things, I think then we have prepared you for life. For an educated person empathy with another person is important. I think elitisms should be knocked out during the course of education.

How important is it for universities to have a connection and engagement with the local community where the campuses are set?

Universities are not supposed to be an island or exist inside their own bubbles. It is part of the community. You have to engage with your own community. A university reflects its whole community and their future.

Karma Is A Woman | By Smriti Irani