In a letter sure to kick up a political cyclone, Uma tells Advani what she thinks of some of his closest aides Updates 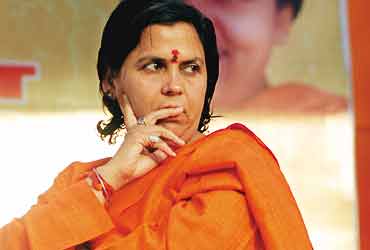 outlookindia.com
-0001-11-30T00:00:00+0553
Efforts have been on to bring the sulking Uma Bharati back into the BJP fold. In the past week, she has met both A.B. Vajpayee and L.K. Advani. BJP and RSS sources have been claiming that Uma will be drafted back into the party as an ordinary member who will actively participate in various mass campaigns.

But Outlook has acquired a copy of a confidential letter Uma wrote to Advani on November 18 from one of her Himalayan hideouts. It was received by Advani's Delhi office on November 20, much before the Ranchi national executive. This letter is more important than Uma's earlier missives because she has directly attacked people by name and used language only she is capable of.

Other second-rung leaders like Pramod Mahajan, Arun Jaitley and Venkaiah Naidu have reportedly got whiff of the letter's contents and are said to be deeply worried about having to work with Uma again. Some of the leaders in the firing line have been expressing their concern and talking about the letter in party circles. Excerpts:

In Letter And Spirit: Uma On Her Party Colleagues

"You used to roar like a lion.... But today rootless computer netas surround you."

"You (Advani) used to roar like a lion in Parliament. But our ideological base used to look frivolous by the way some of our MPs would keep shouting ‘Jai Shri Ram’. We got an opportunity to form the government for 13 days after the 1996 Lok Sabha elections. It was then that our workers saw another aspect of our character. All those people who struggled for the party from 1986 to 1996 were missing in the cabinet of our 13-day government. That was the beginning of the deterioration in our internal culture....

Today, all the people around you are the ones who keep feeding their speeches and kilometres covered in the yatras into their computers. If one of them does some hard work for a week like Atalji, you or me, then he or she will spend months recovering. I am not saying these people have no virtue. You should make use of them but keep them in their place.

"People like Mahajan have only one goal—come to power and make money."

I made a lot of effort to see that Pramod Mahajan is not made a general secretary. I felt that you needed the support of Madandas Devi (RSS leader) and Atalji for that and I tried to secure that. There was a point when Mahajan was about to be made just a vice-president. My opinion about Pramod Mahajan was made prior to the Tiranga Yatra. It is not only my opinion but shared by many important BJP leaders like Arun Jaitley and Venkaiah Naidu, who also wanted to get rid of Pramod.

Many RSS people have the same opinion. I used to feel that there must be some compulsion that forces you and Atalji to bear with Pramod. What cannot be ignored is that he has brought in similar kind of persons in different states who were bent on destroying the ideological foundations of the party. People like Mahajan have only one goal in their lives—to come into power and then to make money once they are in power. I had thought you and Atalji would support me in taking on Pramod.

"When he resigned citing his wife’s illness, he made menopause a national issue."

When he resigned from the presidentship of the party giving his wife’s illness as the reason, he made his wife’s menopause an issue of national debate. Our workers were shocked over the way you and Atalji made sympathetic speeches about this. For 50 years we have been telling our workers that the country comes first, then the party and then the leaders. We used to say that leaders like Deendayal Upadhyay, Vajpayee, Kushabhau Thackeray and Advaniji have given up family pleasures for the service of the nation.But we were shown a president who left such a high post for his wife.Shouldn’t Venkaiah have resigned after the defeat in the Maharashtra elections? The party has lost its image in the eyes of its workers.

"I became a victim of a conspiracy hatched by Arun who took his revenge on me."

AS the Madhya Pradesh chief minister, I overlooked some suggestions made by people like Arun Jaitley and Venkaiah. So Arun Jaitley took his revenge when he got the opportunity. I wished to win another assembly election in Madhya Pradesh. But before that I became a victim of the conspiracy of two-three leaders from Delhi. They kept conspiring against me.

I had told organisational secretary Kaptan Singh Solanki to take care of only the organisation in Madhya Pradesh. I told him not to call meetings with the DGP and the chief secretary. If needed, I instructed him to call me. Some of these selfish people used to make false phone calls posing as my family members in a very systematic manner. The entire planning was done by Kaptan Singh and Yashodhararaje (Rajasthan CM Vasundhararaje’s sister). And then there were the ‘off-the-record’ media briefings.

"I saw only hunger for popularity in Kalyan’s eyes.He was like a man intoxicated."

When we were lodged in the Matatila jail (after the Babri demolition), your popularity was at its peak but you were far from being egotistical or a show-off. You would remember that Kalyan Singh came to meet you there. He was a little late for the meeting. You looked at him with a lot of love and affection. But I saw only the hunger for popularity in Kalyan Singh’s eyes. He looked like a man intoxicated.

"The Gaur govt in MP is working as Digvijay Singh’s B-team. It is corrupt."

When it became clear that I have to stay in Madhya Pradesh, I began to work in my own style. Till the Lok Sabha elections, we were running the government only to win the maximum seats. But after that I ran the government for the people. I was really courageous about checking corruption and the evil feudal elements. I was not ready to spare the media, ministers, legislators or any officer. Many feudal Congress leaders of the state were thinking of going abroad. Even Digvijay Singh was hesitant about visiting MP.

But the Gaur government is working as the B-team of Digvijay Singh. Corrupt officers are becoming bolder. I had left everyone half-happy and half-unhappy. I don’t know under what pressure you kept on delaying the formation of the coordination committee for MP. All those promises of development that brought us to power are left behind. But if a coordination committee had been formed, then Gaur and I would have gone along well.

"Sushma gave the first off-the-record briefing that the party wanted to be rid of me."

Sushma Swaraj gave the first off-the-record press briefing about me in the central hall of Parliament on August 22. She said that the party wanted to get rid of me. During all those days that I spent in Hubli jail, there were briefings against me in Delhi. I kept you informed you about this. The off-the-record press briefings made by Venkaiah Naidu, Sushma Swaraj, Pramod Mahajan and even by Arun Jaitley destroyed my image. Every day, Sushma and the others made up new stories about me and planted them in newspapers. Completely false versions were given to the press. It became very difficult for me to talk to any of my party colleagues in Delhi. Just look at the November 9 issue of Jansatta. The press briefing has actually been given by Sushma Swaraj who has only used Mukhtar Abbas Naqvi as the medium. The people given the most important positions by you (Advani) were bent upon destroying me.

Even I have weaknesses. I am moody and stubborn and do not give up what I feel is right.... When you showed me the list of the general secretaries on October 29, I had asked you to remove my name.You felt this would create a controversy. So you suggested that the media can be briefed that I was on leave till November 30. But Arun Jaitley and Venkaiah Naidu felt that my stature would become taller if the media was told this. So, at the last moment, the briefing was given by Mukhtar Naqvi instead of Jaitley. What he said was the complete opposite of what had been decided; that my name was not in the list of general secretaries at all. This was a fabrication for the consumption of the media. Since then, the repulsive face of the party became all too visible.

By Neelabh Mishra And Rajesh Sirothia