U Said It: Just Jokin'

Apologies to the gent who sent us our Gujarat opinion poll cover. As for the rest, here they are, Sardarji jokes, Laloo jokes or whatever—this one time, we plead not guilty. 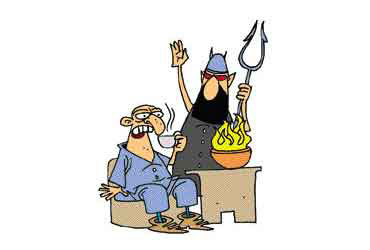 outlookindia.com
-0001-11-30T00:00:00+0553
Eighty-thousand Sardarjis meet in downtown Barnala for a "Sardarjis Are Not Stupid" convention. Santa Singh, the convenor of the meet, says: "We are all here today to prove that we Sardarjis are not stupid. Can I have a volunteer?"

Ramesh and Suresh go to a psychiatrist's clinic, and Ramesh, very apologetically, tells the doctor that Suresh has gone insane.

Doctor: Who told you that you are Tony Blair?

Ramesh (interrupting): Don't believe him. I never told him anything like that.
Kandarathithan,, Chennai

A villager to the executive of an advertising agency: "What do you charge for an advertisement of death." The executive: "Rs 25 per cm." Villager: "Oh my god! He was 6 feet."
Beena, Pali,, Rajasthan

Golda Meir, the former Israeli prime minister, was on an official visit to Washington. President Nixon had arranged a private dinner in the White House in her honour. During the dinner, Nixon was praising the Israeli army in general and commanding generals in particular. He could see that he had succeeded in flattering Golda Meir. Then he asked: "Will you do me a favour? Let us exchange two generals between our two countries." A visibly happy Meir readily agreed, and said: "You name two generals you want from us."

Sherlock Holmes and Dr Watson went on a camping trip. As they were readying for the night, Holmes asked Watson: Look up at the sky and tell me what you see.

Watson: I see millions and millions of stars.

Holmes: And what does that tell you?

Holmes: Elementary, my dear Watson. Somebody stole our tent.
Modit Dhasmana,, on e-mail

Patient: Nurse, I want to know my blood group.

Patient: I am positive, but can't wait to know my blood group.
R. Geetha Kannan,, Chennai

Interviewer: What is your qualification.

Interviewer: BA Post Graduate! What's that? How is it possible?

Candidate: I was doing my BA by correspondence.
Anand K.,, Chennai

Jim and Mary are both patients in a mental hospital. One day while they were walking past the hospital pool, Mary fell into it.Without blinking, Jim too jumped into it and pulled Mary out of it. When the medical doctor was told of Jim's heroic act, he immediately ordered him to be discharged, as he considered him to be mentally stable. Doctor to Jim: "I have a good news and a bad news for you. The good news is that you're being discharged since you jumped into the pool to save the life of a fellow patient. I think you have regained your senses. The bad news is that Mary hung herself to death with her bathrobe in the bathroom I am so sorry, but she's dead.

Jim: She didn't hang herself. I put her there to dry.
Anu T.V.,, Bangalore

On his first day as a trainee in an MNC, one man dialled the pantry and shouted into the phone: "Get me a coffee quickly!" The voice from the other side responded: "You fool, you've dialled the wrong extension. Do you know who you are talking to, dumbo?"

"No," replied the trainee.

"It's the managing director of the company, you fool."

The man on the other end shouted back: "And do you know who you are talking to, you fool?"

"Good," replied the trainee and put the phone down.
Prakash Jothady,, Secunderabad

Laloo Yadav and Rabri Devi once went visiting the White House. In the middle of an official dinner, Laloo excused himself to use the bathroom. He came back after a couple of minutes.

On their way back home after the dinner, Laloo turned to Rabri and asked: "Did you know that Clinton has got a solid gold urinal in his bathroom?"

Rabri: "There must be some mistake. I'll call Hillary when we reach the hotel and find out."

Once inside the hotel room, Rabri calls up Hillary: "Is it true that Bill has got a solid gold urinal in his bathroom?" Hillary put her hand over the receiver and says: "Bill, I found out who peed in your saxophone."
Murali Duggineni, Hyderabad

A Sardarji to his girlfriend: "Come home tomorrow. No one's gonna be there." Next day she goes to his home and there's nobody.
Jigar Mehta,, Mumbai

Year 2050 and robbers carry deadly viruses as weapons. A gand board a train and threaten the passengers with a vial of the

HIV virus. Terrified, all of them, except one, give away their belongings. The robbers inject him with a dose from the vial. When asked about his folly, the man replies nonchalantly: "Nothing to worry. I am wearing a condom."
Y.V.S. Madhav,, on e-mail

A dead man was sent to hell and on arrival he was told that there were three kinds of punishments for inmates. He was given the option of looking at all of them and selecting one. In the first room, people were standing upside down. Seeing the pain on their face, he decided against the punishment. In the second room, people were standing with huge ice cubes on their heads in freezing temperature. He said no to this too, and entered the third room. He was surprised to see people having coffee and relaxing. Without thinking further, he went for it and his wish was granted. As he entered the room, he heard the voice of the manager: "The coffee break's over. All of you keep the fire bowl on your head."
V. Vijayalakshmi,, Chennai

While cleaning the almirah in his office one day, a government employee found an old brass lamp. Without suspecting anything, he rubbed it, and a genie appeared to grant him three wishes. The man's first wish: a wine bottle. It was granted. Next he wished to be on an isolated island with beautiful women all over him. The next instant he found himself on an island with gorgeous women. Then he made his last wish: "I wish I never had to work again." The genie granted this wish too: the man found himself back in his government office.
Manjeet Singh,, Chandigarh

An English lady, while visiting Switzerland, was looking for a room and asked a school master if he could recommend one to her.He took her to several houses, and at the end of a tiring day, she liked one of them. When everything was settled, the lady returned to her home to make the final preparations before moving. Back in England, one morning she remembered that she had not enquired about the WC being conveniently situated. Harried, she sent a note to the school master, who did not understand the meaning of the abbreviations WC. He asked the parish priest if he knew anything about it. The priest told him that she must be asking about the wayside chapel. Satisfied, the teacher sent this letter to the lady.

I take great pleasure in informing you that the WC is situated nine miles from the house in the centre of a beautiful grove of pine trees surrounded by lovely grounds. It has a seating capacity of 220 people and is open on Sundays and Thursdays only. As there are a number of people expected for the summer, I would suggest that you come early although there is plenty of standing place available. I would especially recommend your ladyship to go on Thursdays when there is organ accompaniment. It may interest you to know that my daughter first met her future husband in the WC and was also married there. I can still remember the rush for seats that day. There were ten people for every seat normally occupied by one. It was wonderful to see the expression on their faces. An auction is to be held to provide cushion seats for everybody since people feel it is a long-felt need. The newest attraction is a bell. It rings every time anybody enters. My wife is rather distressed as she can't attend regularly. It has been almost a year since she went last. This pains her. I shall be delighted to reserve the best seat for you if you wish. Hoping to have been of service to you.

PS: The hymn sheets are behind the door.
Bikika Tariang Laloo,, Meghalaya