U Me Aur Hum

U Me is plain ho hum - nothing more than maudlin and tedious, irritating rather than affecting... 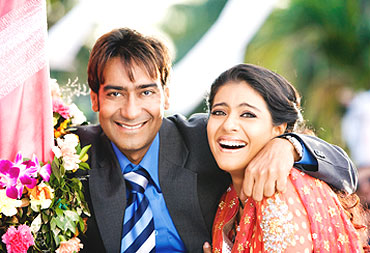 The premise of U Me Aur Hum sounds sufficiently heart-tugging: what if the one person you love most dearly loses all memory of you? Now don’t even consider relating this flick to the fabulous Eternal Sunshine of the Spotless Mind, nor to that middling 50 First Dates. U Me is plain ho hum. The idea might seem poignant on paper but on screen it’s nothing more than maudlin and tedious, irritating rather than affecting.

From the very first shot, with an old man recounting his love story to an old woman, everything about the film looks too neatly staged: the nifty close-ups, sweeping camera moves, the eye-pleasing colour palette. The script is symmetrical and engineered, the first half is about love, misunderstanding and reunion, aboard a cruise-liner; second about the problems that plague a marriage when the wife is discovered to be suffering from Alzheimer’s. It’s as though two totally different movies have been stitched together at the interval.

Forget realism and compassion, Alzheimer’s is played out like some spooky thing. At the mention of the disease the film rather jerkily turns into a horror show. Even the couple’s once soft-focus apartment gets framed like the haunted flat in RGV’s Bhoot. The usually spontaneous Kajol looks terribly contained. The focus remains squarely on Ajay and he is particularly dreadful trying to play rakish and cool, especially when he keeps saying: "You know something". If these scenes from one marriage were not enough, two other couples are thrown in as backdrops: one "unhappily married", second "happily unmarried". Very geometric, in keeping with the film’s spirit. In all these (mis)calculations, two very good performers get a short shrift: Sumeet Raghavan (excellent in TV comedy Sarabhai vs Sarabhai) and Divya Dutta, who looks highly unbecoming in the introductory quarrel scene.

Vishal Bhardwaj’s music is shockingly average save the nicely drooping and laidback number: Apne rang ganvaye bin mere rang mein dhal jaao. The cinematography is showy and the dialogue corny. At a time when Hindi films have begun to speak in a refreshingly relaxed lingo, U Me is a blast from the hoary past. I was squirming on hearing the heavy-duty philosophy on love.