It is not so bad as to make you dash for the door. But you would not have missed much if you never entered the hall at all. 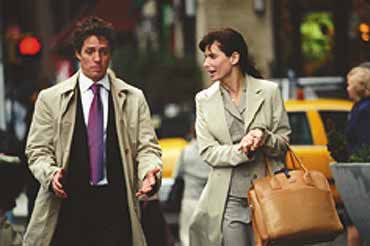 Pardon me for striking a sour note in this Valentine Week. But Two Weeks Notice does little to bring that smile on your lips all love stories are ordinarily meant to. Blame it on the plot, it's far too predictable. Haven't two diametrically opposite people been coming together since the time Adam and Eve walked on earth? And, haven't ugly ducklings always got transformed into beautiful swans by the magical power of love?

Lucy (Bullock) is an idealistic lawyer who protests for every cause with heart-felt passion even when her friends are busy proposing to each other. She eats cheesecakes made of soy and tofu and wonders: "Why am I not reaching out to people?" George Wade (Grant) is a frivolous, real estate millionaire who can be serious about nothing and nobody. As luck, and a Hollywood script, would have it, Lucy is appointed Wade's chief counsel. Now, why would a committed lawyer like her accept this white-collar job? Because Wade promises to save her much-beloved community centre building from destruction. Gradually, Wade becomes completely dependent on her—from selecting his stationery and mattresses to filing for his divorce. Then one fine day, Lucy decides to quit and puts in a two weeks' notice. Time now for the love to bloom as Lucy starts getting jealous of her prettier, younger replacement. And Wade realises that Lucy might be "a little rough round the edges but if you look closely, she's absolutely beautiful".

So what's new? Some interesting situations and a few funny lines. Like when Wade refers to Lucy's snores: "It was magical. You made sounds like no woman ever had." Or when he talks about her obsession with causes: "You ARE the cause. You make Gandhi look like a used car salesman". But even with these doses of humour, the film's not as lively as even a Dharma and Greg. Even if all love stories are supposed to be predictable, it's the chemistry of the players that creates the frisson. Grant and Bullock work perfectly as friends, but as lovers they are no Richard Gere-Julia Roberts. No, they aren't even a Dharmendra-Hema Malini. Both are too trapped in their well-defined on-screen personae. Grant has to be natty, stylish, witty and poker-faced. Bullock is, as usual, frumpy, sloppy and dishevelled, a complete opposite of a Nicole Kidman. But she has to get into a feminine evening gown in the end to attain cinematic nirvana.

What else is then left to watch out for? Donald Trump as himself. And wasn't that Ravi Shankar's Grammy-nominated daughter Norah Jones warbling at the party? Two Weeks Notice is far too slight a film to make a strong impression. It's not so bad as to make you dash for the door. But you wouldn't have missed much if you never entered the hall at all.