Two Leaves Can Make A Spring

Having jettisoned Sasikala and her coterie, Jayalalitha is set on a national presence 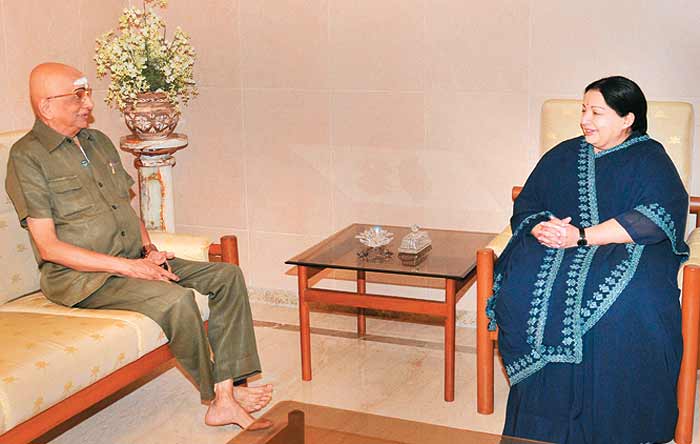 Tamil Nadu chief minister J. Jayalalitha—perhaps borrowing an idea from one friend, Narendra Modi, and encouraged perhaps by another, Cho Ramaswamy—has a bee buzzing in her bonnet: a role for herself in national politics. Predictably, the lead-up was abrupt and dramatic. About a month back, Jayalalitha threw her confidante Sasikala out of the AIADMK and her Poes Garden residence. Out, too, went Sasikala’s relatives holding party positions. It’s not clear what the provocation was, but Jayalalitha wants to dissociate herself from the cloud of corruption around Sasikala and her coterie—husband, nephews, relatives, loyalists in the bureaucracy, chiefly from her Thevar community. The severance has a ring of finality to it. “Betrayers won’t be forgiven,” Jayalalitha told a party general council meeting after the expulsions, so, unlike in 1996, reconciliation is ruled out.

As for her national ambitions, she made it known last week to AIADMK cadres that the party should carve out a role for itself “beyond the borders of Tamil Nadu and reach the top spot”. Token acknowledgement of her ambition came soon enough from the BJP’s L.K. Advani, who described her as a “natural ally”. Given her overweening self-belief, bolstered as it is by the drubbing the AIADMK gave rival DMK in the assembly elections, she is evidently quite serious, though it is actresses rather than politicians from the south who have so far had pan-Indian appeal.

When she took over last May, Jayalalitha, apt to be imperious and peremptory, presented herself in a mellow, accessible, even charming avatar, giving the impression that she would justify the mandate her party had got. Her reading was that the electorate had rejected the DMK and reposed faith in her party to rid the state of corruption. Across the nation too, the mood is against corruption. So Sasikala & Co had to go. “They were running amuck,” says a source, so much so that it was subverting Jayalalitha’s promise that bureaucrats’ initiatives would have her backing. As a bureaucrat put it, “If the DMK took ‘x’ rupees per flat from a builder, now the word was that five times that amount was the price to get a job done.”

“No one tells chief minister Jayalalitha anything because they fear they will be insulted or humiliated. And no one is interacting with civil society either.”
M.G. Devasahayam, Retired IAS officer and activist

But there is also talk that a “Mylapore mafia”—a reference to Jayalalitha’s alleged dependence on a Brahmin lobby, including Thughlaq editor Cho Ramaswamy and Sangh parivar ideologue S. Gurumurthy—has replaced the Sasikala gang. Sources say that since much of Jayalalitha’s and the party’s finances were handled by Sasikala, she has now got a team of lawyers and auditors to clean up the mess. For political counsel, she looks to senior party leaders like P.H. Pandian. But in the period before Sasikala was turfed out, Cho had become a frequent caller on Jayalalitha—once a week, as opposed to once a month earlier.

Cho is dismissive of the perception that he’s the chief minister’s new “confidant” and “advisor”, though “we happen to know each other for 55-60 years”. Satirist that he is, he says, “They say so many things. They even call me a Brahmin. I am indeed an Iyer, but I don’t have any qualities of a Brahmin!”

Those who see him as pivotal in Sasikala’s ouster, however, point out that Thughlaq’s anniversary fetes are usually held in a small hall, but this year’s function, held last week, was at Valluvar Kottam, the chariot-shaped memorial to Tiruvalluvar which has an auditorium that can accommodate some 4,000 people. State security was provided for the event, leaving no doubt the government did play a role, even if the rumoured meeting between Modi, Advani (who were invited) and Jayalalitha did not take place. Laying bare his loyalties, Cho declared at the function, “If at all there is going to be a government supported by the BJP and not led by it, I’d prefer it helps Jayalalitha become the PM.”

But her tendency to keep to herself—she did not even pay a condolence visit to the house of her dance teacher K.J. Sarasa, who died a couple of weeks back—could work against her. Obviously, she is getting no direct inputs. “No one is interacting with civil society,” says M.G. Devasahayam, a retired IAS officer and activist. “No one tells her anything because they could be insulted or humiliated.” The joke is, the only things IAS officers tell her is ‘seri’ (okay, in Tamil) or ‘sorry’.

That she is ill-advised, or not at all, is quite clear. Many of her ideas directed against the previous regime—such as deferring the implementation of a uniform syllabus, the plan to convert the Anna Centenary Library into a children’s hospital, her order to abolish the posts of some 12,600 welfare workers hired by the DMK regime—have been stayed or quashed by the courts. Also, an interim order of the high court, hearing a PIL, has strictly told her to keep her hands off the Rs 552-crore assembly-secretariat complex, former chief minister M. Karunanidhi’s dream project. She had made it a point of prestige not to have offices there and instead convert it into a super-speciality hospital. But Cho defends her. “She’s a good administrator,” he says. “Her administration the last time she was in power wouldn’t have been good if she wasn’t in touch with the people.”

Prime ministerial dreams could be deferred, but the chief minister has to deal with the more immediate threat of the Sasikala group hitting back. Party functionaries and cadres are happy about the break with Sasikala—one party source said “Jayalalitha is out of the web and it’s final”, and there was even some bursting of crackers and distribution of sweets. But with Jayalalitha “clueless about finances, which were handled by the Sasikala group”, there could be a big headache to deal with. On January 17, at the annual three-day festival in Thanjavur during Pongal that Sasikala’s husband M. Natarajan organises, he bragged that he could shake up the state with his slew of “influential” friends. As proof, he introduced one Krishna Mohanji, who he said was the brother-in-law of Union minister Pranab Mukherjee. But police officers have trashed the claim.

As Prof C. Lakshaman of the Madras Institute of Developing Studies, says, “Without Sasikala, the party will survive, but without Jayalalitha it will not. She’s won a huge majority in the elections, so who can dare to challenge her in the party or the government?” No wonder she’s dreaming big.