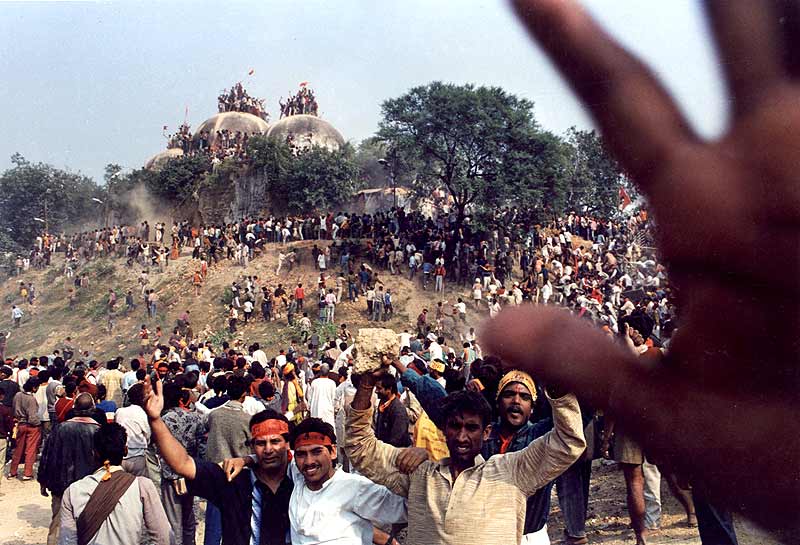 Babri Masjid: As It Happened

The Ram Janmabhoomi dispute winding its way down to the VHP, the demolition, the Liberhan Commission’s 17-year probe and, finally, the Allahabad HC verdict

Today, when I look back on what I witnessed in Ayodhya on December 6, 1992, I can’t help also thinking about what happened in Gujarat in 2002 and in Assam this year. A leopard, obviously, can’t change its spots. And you can’t teach an old dog new tricks. Such is the nature of the beast. But what is worth pondering over is whether we have learned any lessons or not from those calamitous events in the north, west and east—almost like three acts of a play—exactly at 10-year intervals.

I have vivid memories of that terrifying Sunday 20 years ago. From the roof of Manas Bhawan, Indian and foreign journalists watched one dome after another of the Babri Masjid being pulled down. The press was doing its job; the reporters were taking notes, the photographers clicking pictures. Not far away, the DM, SP and other worthies were comfortably seated on a perch the administration had reserved for itself. They sat there drinking endless cups of tea and coffee, observing the goings-on from their vantage point like VVIPs in the president’s box watching a game of cricket. We still expected New Delhi to step in, though. Some of us visualised commandos dropped down from army helicopters to stop the demolition, chasing nutty karsevaks out of the boundaries of Ayodhya. But the flying machines didn’t materialise and we suddenly stopped fantasising after the central dome came down around 5 pm.

Interestingly, the Vishwa Hindu Parishad, which controlled Ayodhya in the run-up to the demolition, had made it mandatory for journalists to fill up forms for a ‘press card’ to cover the kar seva on December 6. The cards were issued by a VHP media centre run by a man called Ram Shankar Agnihotri. He handed me a form. I was filling it up when an abp reporter took me aside and said that the karsevaks wouldn’t spare me if the card pinned to my chest had a Muslim name. “For god’s sake, take a Hindu name, yaar,” he whispered. I told myself that if I was going to assume a Hindu name, it had better be good. Ultimately, I wrote A.K. Ray on the form along with the name of the magazine I worked for in those days, The Illustrated Weekly of India. A.K. Ray is phonetically similar to the Bengali words ‘E ke ray’—or ‘who is he’. The Bengali journalists gathered in Ayodhya complimented me for that touch of irony. 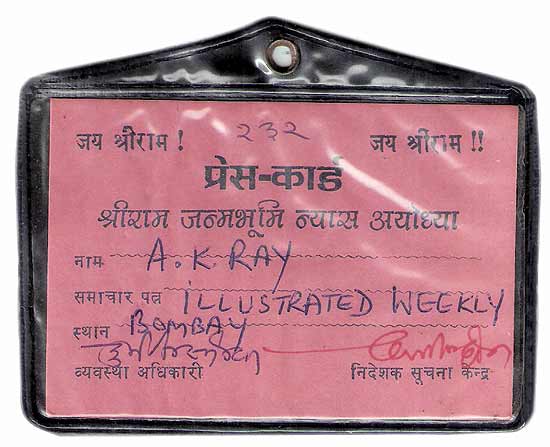 Another Muslim journalist, Sajeda Momin, The Telegraph’s Lucknow correspondent, became Sujata Menon for the same reasons. Sajeda, a British national of Indian origin, didn’t have to wrack her brains, though. Her friends in Ayodhya had already rechristened her for her own good. Coming to me, I had to assume yet another alias for the return journey from Lucknow. Flights were badly disrupted by the post-demolition tremors. Taking no chances, I boarded the Punjab Mail as Frank Anthony to save myself from Hindus and Muslims alike. I reached Calcutta safely but there was a lot of explaining to do when I submitted the tour bills. However, everyone, including the ToI accounts department, was very sympathetic after reading my story (A Brick in the Wall) and I got away.

In 2002, I was working for the South China Morning Post. Foreign editor Peter Kammerer told me to go to Gujarat to cover the post-Godhra violence. I was keen to take the first available flight out but contacts in Ahmedabad categorically warned me against it. Their refrain: if you value your life, stay out of Gujarat. I tried arguing that I would probably be spared because journalists, after all, are like Red Cross workers. Then I was informed that the situation was so bad that Muslim ips officers and HC judges were fleeing their homes! I explained the situation to Peter, who understood. But I will always nurse a grouse against Narendra Modi—because of him I missed a big story. This August, again I covered the religious violence in Assam’s Kokrajhar district for Outlook, where Muslims accounted for 80 per cent of the casualties.

Why do I inevitably think of Gujarat 2002 and Assam 2012 when I recall the demolition of the Babri mosque? Because the Sangh parivar is the common denominator. While its role in Ayodhya and Gujarat is too well known to bear repetition, Outlook exposed the Sangh’s moral and ideological support to the genocidal Bodo campaign against Assam Muslims. Muslims across India seem to know who their enemy is. But do Muslims know who their friend is? Well, the most powerful bulwark against the Sangh are the Hindus themselves. Muslims must understand that if the Hindus were all anti-Muslim and pro-BJP, then the BJP would have been perpetually in power at the Centre. It wouldn’t have been rejected in 2004, and again in ’09.

As for Ayodhya, the best bet for Muslims, it seems to me, is to help spiritually minded Hindus—not the Sangh heavyweights—build a grand Ram temple where the mosque stood. The gift will suck the wind out of the Sangh sails. And by neutralising the saffronites, Muslims will fortify their own position as partners in India’s progress. All this is easier said than done. But it’s worth a try.