Will Turkey and Pakistan serve US strategic interests in Iraq? 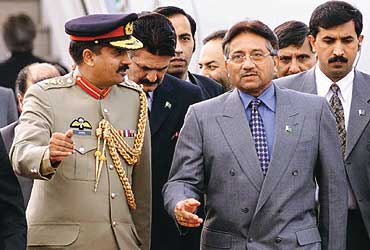 outlookindia.com
-0001-11-30T00:00:00+0553
Though the Turkish government is still at sixes and sevens over whether to contribute troops to Iraq, Ankara is firm on one issue: the Turkish army will go into Iraq only if one other Muslim nation also sends a contingent. Ankara's preferred ally is Pakistan. And from all accounts, Pakistan President Pervez Musharraf is willing to play ball.

But first, a little on Turkey's strategic interests. Ankara sees Iraq, especially the north of the country, as being within its sphere of influence. Having almost completely subdued the 17-year Kurdish insurrection, Turkey's ruling class fears Iraq's Kurds will declare an independent state in north Iraq, consequently fanning separatist agitation within Turkey itself. During Gulf War II, Washington dissuaded the Turks from crossing into Iraq, promising to rein in Iraqi Kurds who, though, continue to control a number of major towns and cities in the oil-rich region.

When asked by Washington to contribute peacekeepers, Ankara demanded northern Iraq as its zone of operations. This the US and local Kurds rejected on the grounds that Turkey would stifle Kurdish autonomy. As an alternative, Turkey wants an ally in the north to help protect its interests as well as the ethnic Turkomen minority from the wrath of majority Kurds. Only last week, nine Turkomen were killed in ethnic clashes near Kirkuk.

No wonder, Ankara has been seeking a proxy: Pakistan. Speaking last week to the Turkish Daily News, Musharraf said his country could consider sending troops to Iraq if the demand for "Muslim troops" were to come from the United Nations, "the OIC, the Gulf Cooperation Council, or the Muslim countries of the region: Jordan, Bahrain, Iraq, Saudi Arabia, UAE".

What was more interesting were Musharraf's comments on the size of any Pakistani force to be sent to Iraq, its possible zone of operations and the reasons for such a choice. Pakistan's president put it on record that his country could contribute up to two brigades of ground forces under their own divisional command. Moreover, Islamabad wants its forces to be stationed in northern Iraq. "Now we would, if at all we go, prefer to be in that area with our own command because the Turkish prime minister also wants us to be there and we would like to be near to our Turkish brothers," General Musharraf said.

A fortnight ago, Turkey and Pakistan held talks at the foreign secretary level on the possibility of Islamabad sending troops to Iraq. Though few details of the talks were released, Musharraf's comments a week later confirmed the positive tone. Washington is wary of Arab nations sending contingents. Yet the US would like to be able to point to support from the Muslim world, with both Ankara and Islamabad fitting the bill. Whether Turkey and Pakistan will also be singing from the US songbook is another matter.