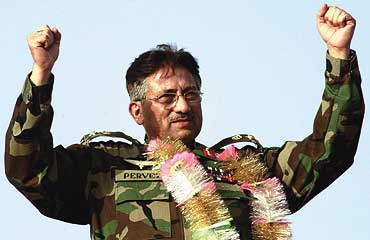 outlookindia.com
-0001-11-30T00:00:00+0553
It's no longer a state secret, it's a grim reality most Pakistanis are quite reconciled to. President Pervez Musharraf's blatant and audacious U-turn on Kashmir, restraining jehadis from crossing the LoC into India, believe it or not, seems to have won popular endorsement. People here feel the military regime's new Kashmir policy is judicious, they think it would be beneficial for the country, they even argue it is about time to counter rabid jehadis from tearing the social fabric of the nation apart.

These aren't the views of prescient analysts but of those whom the media doesn't turn to for catchy soundbites. Most do not want to be identified, fearing the jehadis. But sample the comments of a few. A professor from Peshawar University says, "We were really happy at the ditching of the Taliban. And the next best thing to have happened after that is the change in the government's policy on Kashmir. We hope the influence of jehadis is now rolled back." Adds another lecturer from Lahore, "These jehadis had the guns and even influenced what we taught to students."

A Karachi-based businessman, similarly, told Outlook, "We hope the policy of monitoring madrassas and stopping assistance to jehadis in Kashmir is here to stay. Since the law and order problem in Karachi was because of them, we now hope the city can recover its earlier verve." And those apolitical youngsters of Islamabad who prefer swinging parties to the cry of jehad are hopeful that the suffocating grip the fundamentalists have over their social life would now be loosened forever. If the price for such freedom entails sacrificing Kashmir, then it is worth it.

Obviously, Kashmir is more deeply embedded in the Pakistani psyche than these people would have you believe. But their responses explain partially why there has been no display of fury at Musharraf's volte face on Kashmir. The jehadi ideology was the iron in Pakistan's liberal soul. And in the ongoing process of surgical cleansing, a little of Kashmir has to be extracted. It's inevitable, it's a necessity, it's a sine qua non of the war against terrorism.

Popular political analyst Ayaz Amir explains the phenomenon: "We have taken a U-turn on Kashmir and most Pakistanis have accepted this new policy except the religious groups. The irony is that we were made to abandon this policy not because of our own wisdom but because of foreign powers. And now that Musharraf has done this, he is not batting an eyelid."

What Awami National Party leader Asfandyar Wali Khan says today could have been branded as heresy pre-September 11. But sensing the wind blowing in a different direction, he's emboldened enough to declare, "Supporting militants inside Kashmir is no answer to the problems there. We have always advocated dialogue with India. If the government is finally seeing some sense then this is going to be of great benefit to Pakistan, as the army's policy on Kashmir in the last few decades has not liberated Kashmir but brought every sort of law and order problem to Pakistan that you couldn't have earlier conceived."

The change in the mood is partly because of pragmatism. The world's only superpower is fighting the war against terrorism, adamant on smoking out militants from their hideouts. For most, this isn't the time to quibble over definitions of freedom fighters as against militants; it is about saving the country from America's wrath and the jehadi's atavistic passion.

But isn't Musharraf still blowing hot and cold over Kashmir? For instance, he told Newsweek that he'd never assured the US of permanently stopping cross-border terrorism. Many here, though, feel his response was only a riposte to Indian Prime Minister Atal Behari Vajpayee's boast of having won the war against Pakistan without firing a single shot, that it is a manifestation of his frustration at New Delhi's refusal to come to the negotiating table soon.Says Amir, "Even if India is ready for talks, they will treat Kashmir as they have in the past and they will not be ready to hear Pakistan's point of view." So what does Musharraf do: a U-turn on the U-turn on Kashmir?

Dr Shirin Mazari, director general of the Institute of Strategic Studies, who is thought to be close to the military establishment, shows Islamabad's hand in claiming Musharraf hasn't given any assurance of permanently stopping all activities on the Pakistani side of the LoC. She says, "I don't think the President gave any long-term commitment. India is not responding to any move from Pakistan and this way the Kashmiris on both sides will continue fighting for their rights. You have to distinguish between Pakistanis and Kashmiris. The Kashmiris of Azad Kashmir are not going to sit idle while rights are being trampled upon on the other side of the LoC.... If Pakistanis have been stopped, how can one expect to stop the Kashmiris on either side from fighting for their liberation?"

This isn't a veiled threat of what Pakistan is capable of lest India spurns its overtures. At best, Islamabad could try to indigenise the Kashmir struggle, a policy that has definite limitations. But Mazari's rhetoric signals more a return to the Kashmir policy of pre-militancy days. As Gen (retd) Talat Masood, known to have been involved in Track II diplomacy between New Delhi and Islamabad in the past, points out, "Previously, there was duplicity on Pakistan's Kashmir policy when it said that it was only providing political and moral support. Today, it is really doing that as it is no longer funding the jehadis and is closing down their camps and ensuring that no one from Pakistan goes into India-administered Kashmir."

But even Masood, like the majority of Pakistanis, feels the return to the policy of pre-militancy days is good for the country. He explains, "The new policy will not only stabilise the country domestically but crimes like sectarian killings will also end. With no more support from the establishment and a strict eye on foreign funding of militant groups, it is but natural that the militants will be weakened even further."

The rooting out of terrorism, though, will take time. And India can help Pakistan through reconciliatory steps, through initiating measures that genuinely address the Kashmir issue. It is, many analysts feel, the best way to defang the militants. As Gen Masood points out, "Musharraf is no doubt under tremendous pressure from the militants. The fact that the government recently allowed them to hold a rally in Lahore to give vent to their feelings was one such example. There is a price on the head of Pervez Musharraf."

In other words, Musharraf can neutralise militants only if he is seen to have gained something concrete from the U-turn on Kashmir. It is to India's advantage to bolster him in his efforts to crush terrorism. Fresh initiatives on Kashmir could also help divert international attention from the Valley. Dr Mazari explains, "It is also time for both India and Pakistan to stop looking at (US President George) Bush to find answers for them. Bush is indulging in state terrorism by trying to choose leaders in Iraq and in Palestine. For how long can Indians expect Bush to keep looking away from what they are doing in Kashmir? If Vajpayee does not take fresh initiatives, or he is not allowed to take fresh initiatives, then Kashmir will boil over."

But fanning this fire won't be Pakistan, at least not in the immediate future. It could perhaps be the world community, possibly stunned at glimpses of the alienation of the people during the October polls in Kashmir. Musharraf has acted. It's India's turn now.

Yatra On A Mazda Rath