Never before has a plot seen so many twists as in Amitabh Bachchan's dalliance with 'do bigha zameen' in dusty and remote Daulatpur village of UP's Barabanki district. 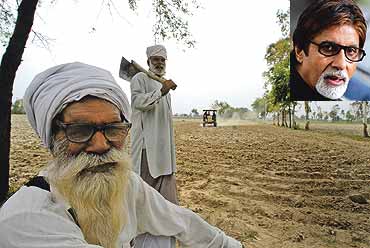 A lesser mortal would have given in. But this is the Big B. On October 12, the actor filed a supplementary affidavit in the Lucknow bench of the Allahabad High Court in which he once again offered to "forego" his claim over Plot 702. In return, he beseeched that the court pass an order declaring that no proceedings "either civil or revenue or criminal in nature" be initiated in future against him. Almost on cue, R.N. Gupta, counsel for the gram sabha, who had earlier argued that Bachchan's claim to the land was a blatant forgery, did a U-turn. He informed the court that the sabha had no objections if Bachchan decided to give up his claims.

But the state government would have none of it. Advocate general Devendra Upadhaya told Outlook, "The counsel for the gram sabha has no right to make such a declaration; after all, the land belongs to the state and it is amply evident from the official land records that forgery was committed to show Bachchan as owner of this piece of land." The government says Bachchan will have to prove ownership of the land before he can "return" it. And it is well aware that Bachchan's side is introducing new twists in the case only to complicate matters and slow down the proceedings.