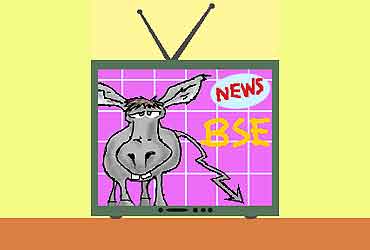 outlookindia.com
-0001-11-30T00:00:00+0553
The two institutions that behaved utterly irresponsibly in recent weeks are the media and the stockmarket. Barring a few noteworthy newspapers and magazines, the media and especially the 24-hour news networks have reduced themselves to laughing stocks. Nobody can take them seriously anymore and they have only themselves to blame. The stockmarket may have reduced some to tears, but as with the Sensex, they too have tumbled—in public esteem.

There is a common fatal flaw in both the television networks and the stockmarket that emerged in sharp relief this time. Both are very immature. Both are young institutions, so youthfulness is to be expected. Unfortunately, they behaved like adolescents, overreacting to situations, ham-handed, high-pitched and hysterical. They got it completely wrong and now stand exposed for an utter lack of experience and perspective. The root cause: both institutions were hijacked by their brat pack.

Both are filled with smart, hardworking, ambitious youngsters. But they also happen to be inexperienced, urban and elitist, with an extraordinarily narrow perspective. Jerking to every external stimulus, they gallop like colts with blinkers, unmindful of issues outside their field of vision. And when reality catches up, they trip badly, hurting themselves and the institutions they represent.

Perhaps politicians will take a lead and give both institutions a wide berth from now on. Instead of running after the media like lapdogs, it's far more important for ruling party politicians to get on with the task of governance and for opposition politicians to rebuild their party. In recent years, TV networks have gained undue importance, and for the wrong reasons. The power arose from converting people into instantly recognisable celebrities, not from reporting the truth or discussing relevant issues. This is a travesty of media power. Visibility does not mean credibility. What this election outcome has reaffirmed is the negative power of the media. Overexposure can kill. What you saw was not the oxygen but the carbon monoxide of publicity choking many media darlings who were routed. That politicians do not really need the media is proven both by Vajpayee and Sonia Gandhi. Both gave few interviews, but remained popular.

Though similar, the stockmarket is actually worse than these news networks. That's because it is unidimensional, selfish and clueless about political dynamics. There is no understanding, let alone sympathy, for the entirety and complexity of the Indian reality. The stockmarket represents only a thin slice of the urban reality, but it has assumed exaggerated importance because of its collusion with the 24-hour networks that report its every rise and fall. Starved of news because of tight budgets and laziness, the networks have resorted to easy titillation by converting the stockmarket into a public race course, aggravating volatility. An important facet of the Indian economy has thus degenerated into a gambling den, marked by purveyors' adrenaline and viewers' addiction. Industry leaders cautioned and analysts commented on the inevitable continuity of economic reforms, but all that was drowned by the cacophony of hysterical reporters, yuppie stockbrokers, and nervous fiis led by some over-educated, under-experienced V-Ps.

Be it politics or economics, aberrations happen because a few wrong people hold the right jobs. But mercifully India has consistently shown that a few right people in the right jobs can rectify the situation. Thankfully, there are enough people around with both maturity and integrity.

If the new government embarks on a rampant privatisation drive, the stockmarket will skyrocket. That's how bizarre the stockmarket has become. Why should any government with a measure of sense and honesty sell off its profitable enterprises? Why shouldn't any government with some sense and conscience invest in agriculture? Yet, these two decisions sent the stockmarket plummeting. The whole point of free and fair elections is that it allows course corrections. When farmers commit suicide, droughts and floods wreak havoc, is it morally right for an elected government of a poor country to disengage from agriculture to appease the stockmarket? No government can allow itself to be held to ransom by the stockmarket, especially when it behaves in an anti-democratic, elitist, unconscionable manner. Sure, noble values can't be expected from market forces. By that token, they shouldn't expect pandering from the government either. A sovereign government must cater only to the weak and the helpless and provide an enabling environment for the rest. It's about time stockbrokers grew up.

In many ways, the Indian networks' fixation with the stockmarket is derivative. They're blindly imitating CNBC, CNN and BBC that now have business news virtually every hour. This copycat behaviour is stupid to the say the least. Firstly, the Indian reality cannot be compared to the developed economies of Japan, the US or Europe. Ours is still an agricultural economy where 300 million people are struggling without basic necessities. Our media's focus has to be necessarily relevant to our specific situation. Secondly, unless there is a catastrophe, these international TV networks are not watched by domestic viewers in Europe, Asia or America. Instead, they cater primarily to travelling bureaucrats, politicians and businessmen.

Only a small fraction of the total population watch our news channels. Still, the incestuous relationship between networks and stockmarkets give the latter a highly inflated status. It's may be too much to expect the media to extricate itself from the tyranny of the stockmarket and behave in a more responsible fashion. But the public and government can do their bit by firmly pushing the entities back to their rightful place and getting on with their own lives.