A weakness spearheaded the arsenal of India's highest wicket-taker 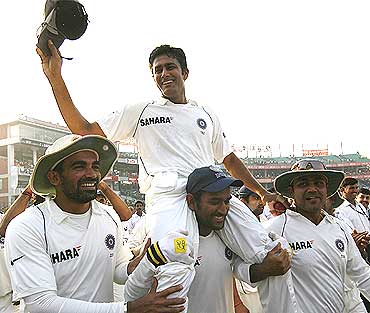 outlookindia.com
-0001-11-30T00:00:00+0553
When Anil Kumble had returned from England after his international debut in 1990, I went over to his house, keen to know what he had learnt there and his feelings about playing with the likes of Kapil Dev, Mohammed Azharuddin and Dilip Vengsarkar. After we'd spent a few hours chatting cricket, Anil produced the gift he'd brought for me—a pair of GM bowling shoes. When I made my Test debut, I wore those shoes. Soon, it became a tradition in the Karnataka state dressing room—whenever a player went abroad, he'd return with a gift for the juniors. As Anil bows out of international cricket 18 years later, he leaves behind a similarly precious, though infinitely more significant, legacy as a captain and bowler.

Anil's art was something new, something the world could not understand easily—and consequently took inordinately long to appeciate and accept. There was a difference between the public perception about Anil's art and his performance. And this was because he had developed into a freakish bowler and was treading, in fact paving, a new path. Let me explain: earlier, India's famous spin quartet had excelled in their respective specialities, raising standards to dizzying heights. But Kumble couldn't find a precedent, a lesson from the past. He had the action of a leg-spinner but wasn't quite a leg-spinner. He bowled what I call freakish leg-spin; his forte was his accuracy. There was no guru who could guide Kumble in his pursuit of a new style of bowling. Of our past masters, only B.S. Chandrasekhar somewhat resembles him.

He had to master his art all alone. His solitary quest lent him mental strength. He was constantly inventing and reinventing himself and his art. This enhanced his creativity, for he was his own coach, working out ways to dismiss batsmen with these unique, 100 kmph plus deliveries.

Detractors regularly whispered around that his skills were not adequate to sustain him at the international level. The biggest flaw in anyone is to not understand his own weakness and live in denial. Anil understood and accepted his limitations early in his career: this was exactly what made him such a great bowler. The astonishing rate at which he was able to strike at the opponents compelled the selectors and the press to accept him, albeit doubts lingered.

I first met Anil while competing at the junior level in Bangalore. We'd had a similar upbringing and schooling. Even similar values, reading habits and worldview. We became great friends. We made our Ranji Trophy debut in the same match—with very funny results. I took a hat-trick, and Anil got a king pair! Keen about his batting, and possessing some talent for it, he was bitterly disappointed.

His outstanding performance in domestic cricket won him the selection for the 1990 tour of England. It was a mixed tour for Anil. He was extremely disappointed by Kapil's nasty, ridiculing comments about his ability as a spinner. Manager Bishen Singh Bedi's wise words helped comfort the budding leggie.

Anil's intensity rubbed off on the man sharing the room with him on tours. That person was often me. We'd together go in search of our favourite vegetarian meals, we'd sometimes go to the movies. From him I learned the importance of remaining intense about the game. For instance, on England's tour of India in 1993, even though quite successful, Anil couldn't take wickets in either some spells or an innings. It fired his determination to rectify this flaw, if you can call it that. He'd talk cricket all the time, he wanted to take a wicket on every ball. He was never satiated, not even if he'd taken five wickets. If he took, say, three wickets off balls he thought weren't good enough, he would not feel enthused. He could differentiate wickets given to him and the wickets earned through hard work.

He'd egg on the team constantly on the field. Fielding at mid-on, I'd hear his war cries like "get him", "catch him", "zor lagao" at least two-three times every over. This intensity was visible when he took his his last Test wicket at Kotla in Delhi; the expression on his face after he took the catch of Mitchell Johnson, with a bandaged hand and running back, was one I have known him to sport all his life as cricketer.

In these days of Twenty20 and one-day cricket, the art of spin bowling is on the wane. I'd imagine the BCCI would be glad to hand him a responsibility to nurture spinners in the country, for he possesses contemporary knowledge.

He became captain at the end of his career, but I believe he was ready for the job in 2000; he didn't get it because the selectors then favoured a batsman as captain. When he did get the reins, he brought to the job all his dignity and passion. He grew in stature in the job. I believe our success in Australia early this year was, to a large degree, due to his leadership that provided strong values and bonding among the team, and positive body language. As he bows out, I hope those values continue to inspire the team.

'Any Day, I Would Give My Right Hand To Captain India'