Turbulence In The Air

Before June 26, Star, Zee and CNBC must rejig their corporate structures. 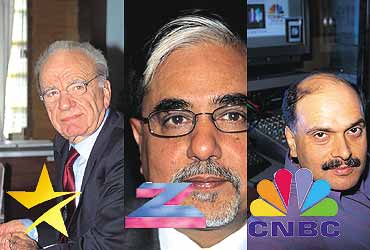 outlookindia.com
-0001-11-30T00:00:00+0553
There's a palpable excitement in television newsrooms. The race for eyeballs is now in its second leg as the string of new news channels launched last month take on the older, well-entrenched ones. There's as much activity in some of the boardrooms. Recent changes in broadcasting laws have forced three channels—Star TV, Zee and CNBC India—to look at ways to rejig their existing corporate structures. Some of them may even be forced to rope in new Indian partners to fill an imminent vacuum.

Late March, the new i&b minister Ravi Prasad made a few controversial announcements—he said that all news channels would have to be uplinked from India, their majority stakes should be owned by Indians, and foreign investors (including NRIs, overseas corporates and FIIs) could not hold more than 26 per cent in them. The new rules affected the three channels, which have to reduce the higher foreign holdings in their companies. Star and CNBC had to do it within three months, and Zee was given a year.

As the June 26 deadline approaches for Star and CNBC, they are furiously trying to finalise a deal. In Delhi, TV 18's Raghav Behl has given three options to CNBC Asia, which holds 51 per cent in the company. Star's head honcho, Peter Mukherjea, is holding discussions in Mumbai with potential investors like the Tata group, UTV, the BPL group, and others. Although Zee's Subhash Chandra still has time, he too is looking at a complex restructuring of his corporate maze.

In fact, the channels contend that deals will be inked within weeks. "Yes, we are in advanced stages of communication," says Yash Khanna, senior VP (corporate communication), Star India, a wholly-owned subsidiary of Star TV Hong Kong. Harish Chawla, CEO, CNBC India, adds that the deal will be announced publicly as per the disclosure norms for listed companies. Lakshmi Goyal, director (Zee News), Zee Telefilms, too is unfazed. "Since we have a year, we'll restructure in due course of time," he says.

But after talking to insiders, investment bankers and analysts, Outlook managed to get a sense of what was really happening in the boardrooms—who was talking to whom, what are the options being discussed, and what could be the most acceptable deal (or partners) to all the players involved.

For CNBC India, working out a solution may not be that difficult. TV 18, through its Mauritius-based subsidiary, already owns a 49 per cent stake in the company and has the option to increase it to 74 per cent or above. Senior TV 18 sources say that the foreign partner too is willing to reduce its stake. The only decision the latter needs to take is whether it wants to come down to 26 per cent, less than that, or even exit the country. In the last possible scenario, TV 18 may pay a royalty to CNBC and continue to use the brand name.

Says media analyst Harish Zaveri of Edelweiss Capital: "TV 18 could increase their stake in CNBC India as they already have a joint venture to provide content." Still, the profit-sharing agreement under the new holding structure has to be worked out. And that could be tricky, since CNBC Asia, by reducing its stake, will have to forego a part of the broadcasting profits of the Indian venture. Another possibility, albeit a bit remote, is that the two partners might rope in a new sleeping Indian partner.

The process gets a little more complex in Star India's case. Obviously, the cleanest option is to invite several partners and reduce the Rupert Murdoch-owned Star TV Hong Kong's stake to 26 per cent. The only problem is that Murdoch will lose controlling interest in his entertainment channels like Star Plus, Channel V and Star Movies. Since most of these are highly profitable, Star may not be too keen to accept such a deal.

Mumbai-based investment bankers hint that Murdoch is likely to hive off the news channel as a separate company, and invite strategic partners/investors in the new outfit.But then, why would anyone wish to invest in a channel that's unlikely to make money for some time? Unless, of course, the partners see a long-term potential in the media sector. To cite an example, there are rumours that Rajat Sharma (of Aap Ki Baat fame) could be one of the potential partners. Sharma, a former print journalist, does a one-hour news bulletin on prime time for Star News and runs a largish set-up, including a studio. According to market-watchers, he has always been keen to launch his own news channel. A stake in Star could be a lucrative opportunity for him to enter this highly competitive business. In a similar vein, for another potential investor, UTV, where Murdoch has a sizeable stake and which focuses on entertainment, this could be a way to get into the news business.

There are also indicators that Star managers are exploring ways to invite Indian financial institutions as well as their Indian employees to invest in the new company. Star has a number of other options too. For instance, there could be a deal along the lines of the radio business, where, at present, licenses can't be issued to foreign entities. So, Star India could continue to be the exclusive content provider to a new Indian company, where it owns only 26 per cent, that has the uplinking license. This would ensure that Murdoch still retains control over content.

The more complicated way would be to create a web of holding companies which will help broadcasting firms wriggle around the rules. In fact, both Star and Zee are seriously looking at this strategy. Here's how it could work for Zee. At present, Subhash Chandra, the NRI promoter of Zee Telefims (which beams Zee News), owns 28.5 per cent through overseas companies controlled directly or indirectly by him, and another 23.3 per cent through Indian companies and local family members. On top of that, FIIs hold 26.8 per cent in the company.

Under the rules, Chandra's overseas holdings and FII stakes are considered foreign. So, Zee has to reduce this from 55.3 per cent to 26. Now, Chandra can float a new company called, say, Zee News. While Zee Telefilms will hold 47 per cent in this firm, other partners and investors can be wooed to buy the remaining stake. Under the pro-rata calculation (55.3 per cent of 47 per cent), foreign stake in Zee News would be equivalent to 26 per cent. So, Chandra can own a higher stake in the broadcasting firm. Or, he could transfer a portion of his overseas holdings to closely controlled corporate bodies in India and ask FIIs to do the same.

Will all these changes make any difference to the operations of news channels? No, say market analysts. Opines Sunir Kheterpal, head (media and entertainment), Rabo India: "It's unlikely that there'll be any significant change in the way they are run. There'll only be an induction of new Indian partners, who will either be investors with interest in the media space or content providers or mere sleeping partners."

If that's true, there was no need for the government to come up with new regulations. However, Pawan Chopra, the i&b secretary, says there was a logic behind the decision. "We thought uplinking from India should be a prerequisite for all news channels and since news is a sensitive subject, there should be a 26 per cent cap for foreigners. This is true of most countries," he explains. And when Star News applied for a fresh uplinking license, the ministry thought it shouldn't have different rules for print (where there's a 26 per cent cap) and television. "There was a political consensus too on this issue," says Chopra.

While the logic may be all right, it's clear that the rules have gaping holes that need to be plugged. So, in the near future, expect a few clarifications or a set of new rules for news channels.Happy viewing until then!

This Masala Is Stale