Smoking equals hypocrisy. By the state, a moralising West and us. 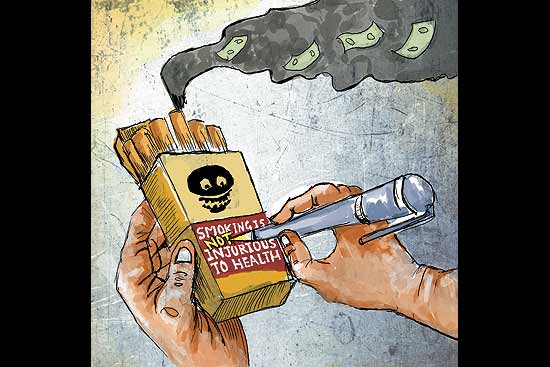 As an unregenerate smoker, who has enjoyed the vast majority of all the cigarettes he has smoked since the first one, back in April 1981, made him sick to his spirit—as one who has no desire to reform, I’d like to add my small voice to the current brouhaha over how smokers may be discouraged.

Raising taxes is all very well; I cannot complain about having to pay more for what is not only not a necessity but activ­ely harmful to me. I remember Yashwant Sinha, when he was finance minister, saying during his Budget speech in Parliament, “And now, I have absolutely no compunction about raising the tax on cigarettes,” to loud table-thumping. Politicians, of course, have few compunctions about anything to do with other people’s money. But that’s when the hypocrisy of the whole system came home to me.

An Indian cigarette costs, to manufacture, about a tenth of what it sells for. ‘Ind­ian-made foreign liquor’ may cost about a fifth. That’s all right; high-end toothpastes, those loaded with common salt and calcium (powdered eggshells) also sell for five to ten times their value. The difference is that while the toothpaste margins go on advertising, marketing salaries and dividends, the bulk of the margin from tobacco and liquor sales is channelled back to the government.

What do they do with it? As far as I know, no one tracks this. It certainly does not go into bolstering up the health budget, which is small change in comparison to the GDP. What is necessary is not more taxes alone, but the spending of that extra money on sanitation and health education. Government attitudes are all too simplistic. If gambling is bad, ban casinos. If tweets are hostile, ban Twitter. If aids is bad, ban sex. They can’t ban smoking and drinking because one, there’s too much money in it; and two, there are too many people dependent for their livelihoods on beedi-rolling, tendu leaf-picking and the extraction of molasses from sugarcane.

Forget the tendu-lkars. India’s upper crust is highly Americanised: most of their pet betes blanches (to coin a phrase) are adopted from Hollywood and New York. Who taught us, and the rest of the world, to smoke? Can anyone remember a frame of Humphrey Bogart’s without cigarettes? I went to college intent on learning to smoke not because of the old Wills ads, good though they were (‘the made for each other blend/ that set the filter trend’), but because smoking, from the films I’d seen and the books I’d read, had romantic connotations. So did the use of alcohol.

Well, who romanticised these evils for the rest of the world? And who is being sanctimonious now? Since 1968, when the surgeon-general first determined that smoking is injurious to health, Americans have got increasingly moralistic about smoking. One upper-crust-type lady said to me once, “Good God, you smoke! Don’t you know it’s bad for your health?” (“So is life,” I wanted to say.) I guess Oprah thinks eating with fingers is bad for our health, too. And Carl Sagan wrote that washing our bums with our hands was “unaesthetic and unhygienic”. Paper’s better?

These are all different horses I’m riding. But who knows? Some of our newspapers carry a ‘medical page’ in which items touted as good for health are repudiated by research a mere six months later. Red meat, red wine, anti-oxidants, good and bad cholesterols—all these have seen their day and will see it again. I admit it’s unlik­ely, but I wouldn’t bet against someone discovering that nicotine or tar (or mol­asses) stabilises a gene which promotes equanimity or a tat-tvam-asi attitude.

The third essential hypocrisy in this business comes from the consumer. Florida courts have done strange things, but to award $3.2 billion to the family of a smoker who died of cancer is sheer lunacy. How can they pretend he didn’t know what he was doing? A literate American? Since 1980, the evils of smoking have been common knowledge. It’s not necessary to enumerate the names of all 108 devils present in nicotine on every pack. I suppose, in the New American Bible, Job’s wife says, ‘Sue God, and die’.

I know my sins will catch up with me one day. I do not have a dry cough yet; both lungs and heart are in excellent condition. Thanks to the shenanigans of successive FMs (how many of them smoke?) I buy very low-end cigarettes, at 40 bucks a pack of ten. (In 1981, a Wills cost 27.5 paise.) I solemnly swear, however, that the day a finance minister ploughs the entire cigarette and liquor tax into the health budget, I will switch to Dunhill’s, or whatever it was that killed the Marlboro Man.