Setting sail with Christophorus Columbus, on his grand quest for magnificent El Indio, is a Malayali 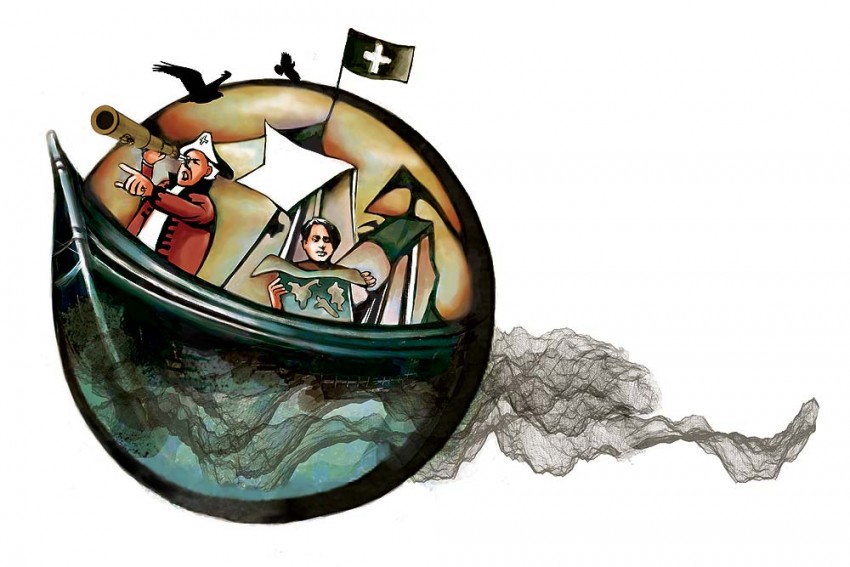 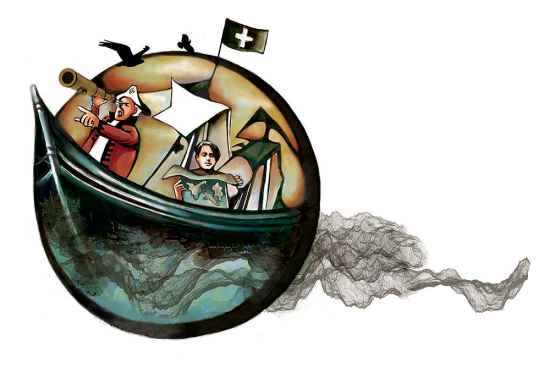 It is strange, now, so many years later, to be telling my story, writing this journal. I think back to that other journal, the one Columbus kept, day by day, sitting at the desk in his cabin as the waves rocked the Santa Maria, his quill scratching away, recording it all—leagues sailed, the direction of the wind, his hopes and fears. Mine will lack that immediacy, because all I have are a few scraps of notes and my memories, the memories of an old man far away from his land and his people, writing in a language that is not mine, for readers in another world. But if I do not tell my story, who else will?

So let me begin as Columbus did, with the weighing of the anchors. It was, I remember, a Friday—I had already learned their days of the week, and this was the day of Venus, goddess of beauty, sprung from the foam of the sea—Friday the third of August, by the Christian calendar, the year 1492, when we set out from the bar of Saltes, at the confluence of two rivers, the Tinto and the Odiel, to sail into the unknown.

I remember it well, that last glimpse of Europe. It was a grey day, overhung by those European clouds that block the light without providing the blessed release of a real rain. Many families were at the quayside, the women in their long skirts and high collars trying to hold back their tears, their children waving, little hands receding with the shoreline. The men waved back, too, some of them, for most of Columbus’s crew were from around these parts, and many did not know when, if ever, they would return to those who now bid them farewell. Then they went down to row, for the sails were limp, and we were counting on the ebb tide to take us downriver. I had no one waving me goodbye, but I stood on the deck, hearing the liturgy of the friars of La Rabida on our port side, chanting to the greater glory of their unforgiving God, as the men on deck knelt and crossed themselves in supplication. I was still there as we went over the bar, watching the coast of that young—and to me quite new—continent disappear, and I thought of my own departure from Kozhikode, silent like a pariah passing a sleeping Brahmin.

We had set sail at eight o’ clock, an auspicious time by my calculations, just before the day entered the last four-fifths of the Panchami and the moon tenanted thirteen degrees of longitude in Sagittarius, which would have required, if you believed at all in my astrological accuracy, a series of rituals to propitiate the planets—rituals I am sure Columbus would not have had time for. So we cast off in time, and there was a strong breeze to sea, which took us southwards as the sun rose, a scarlet stain across a glowering sky.

The breeze took with it too another ship, not of our fleet, the last of many that were all supposed to have left by the previous day, carrying away from Spain the Jews who had failed to undergo the Catholic baptism decreed for them by Columbus’s blessed Sovereigns. I had seen these people, kin to the Yehudis of Cranganore who had found safety in my homeland after an earlier European persecution (fleeing Romans then as they fled Christians now); I had seen them clogging the roads around Palos with their pathetic drooping donkeys and their overladen carts, choking the air with their chants of lamentation, stifling the sea-breeze with desperate sobs. I had seen them everywhere that Spanish summer, bundling their possessions on to carts, on to their backs, into their hearts, condemned to stop being what they were or stop being where they were, obliged to either betray their beliefs or abandon their homes. They were in our way at the port, screaming and wailing as they climbed pushed stumbled on board the ships that would take them away from the only homes they had ever known for generations. They suffered terribly, those Jews, suffered not just their immediate loss but even more the future loss of what they would never have again, their own country, the land to which they had given so much. I wanted to say to them, go in peace, my brothers and sisters, do not weep. I wanted to urge them to sail, sail away from this land where people think there is only one Truth (which they know), sail far without fear and without tears, for this Europe is a close-minded continent, full of intolerance and oppression, a place worth leaving behind. I wanted to say to them, there is a world beyond where men can be men whatever the colour of their skin or the shape of their nose, where you can grow your beards or put caps on your head or worship in your own way without anyone asking you to explain or defend yourselves. I know that world exists because I am from it, it is my world, it is India. Sail with me and I shall take you there.

But I could not, for it was not my place to say this, nor my hope to offer; and so on the same tide, sailing down the Rio Saltes, overladen with suffering humanity, the last Jew-ship left Spain, and I could hear the sad sounds of their mournful pipe and tabor fading as the Jews drifted away from us, towards the Levant, the Spanish sun rising behind them for the last time.

For ourselves, we headed southwest, towards our first stop, the islands lying on the latitude of the Indias, what these people called the Canaries. Yellow birds, I thought reflexively, but no, it was dogs these Latins had named the islands for, howling wild creatures they had usurped the land from. One day these Europeans will want to do the same to us, I knew, and they will treat us as dogs too, caging our treasures like yellow birds.

But the waters were calmer than my mind, and as our little fleet sailed placidly on, I went to look for our leader, Colon, the man they call Christophorus Columbus. I found him in good spirits, pacing the deck with a proprietary air, his ear cocked to an inaudible muse in the foam of the sea, his own personal Venus. ‘Aha!’ he exclaimed. ‘El Indio! Is it not magnificent?’

I nodded, because agreement was clearly expected, and he smiled self-satisfiedly, looking out to sea, turning his face to the spray. ‘I have been writing,’ he declared, with that air he had of imparting information as if he were sharing a rare privilege. ‘I am writing a journal.’ He was enormously proud of this; it was as if the act of writing itself validated, in anti­cipation, the momentous importance of the voyage he was undertaking. He intended to present his journal to his generous Sovereigns, who in their infinite wisdom—he was careful not to mention cupidity—had made the voyage of Christophorus Columbus possible.

“As we went over the bar, I thought of my departure from Kozhikode, silent as a pariah passing a sleeping Brahmin.”

I watched him strut about the deck, barking an order here, asking a question there, filled with the optimism of one who had finally been given the chance to be proved right,  and wondered again, for the thousandth time, why he had embarked on this madness. There was, of course, this thing that men call glory, but that was surely not the most important thing to him: I did not believe Columbus would care very much whether his name lived on or not in the minds of men, whether it was whispered in the hush when men told great stories of adventure and heroism and the deaths of kings. No, for him the immediate was what mattered; personal gain, here and now, certainly meant more to him, for he lived in the present, tasted its disappointments like sour berries, and yearned for the sweetness of success on his palate today, not at the next meal. I would never understand his fondness for titles, something we never took seriously in my country: ‘Don’, now that he had been ennobled just in time for the voyage, and that ridiculous ‘High Admiral of the Ocean Sea’, which he had invented for himself and wanted everyone to use. ‘Colon,’ I said to him, ‘I mean, Don Christophorus, what on earth do these words mean? It is like calling yourself ‘Main Emperor of the Earthly Lands’, or ‘Crowned King of the Soil on the Ground’: either you’re an Admiral or you’re not, and the rest is irrelevant.’ But there was something about Columbus that needed the reassura­nce of those unn­ecessary words, and ‘High Admiral of the Ocean Sea’ he remained.

He had convinced himself, had Columbus, that his precious Sovereigns would make him viceroy in perpetuity of all the lands he was going to find on his way to India. And that after him, oh he insisted on this, his eldest son would succeed to the same position, and so on and on; he was meticulously insistent, Columbus savouring the ascent of generations yet unborn. A dynasty of Columbuses to rule the waves, all by dispensation of a pair of monarchs who did not even know where he was going, and who kept their promises the way a sultan kept his wives, to be fulfilled or ignored as it pleased the monarch’s fancy. Oh Columbus, I thought, but this time I did not say it, you are mad, you are naive, you are addled deranged foolish demented crazy.

And he was, this great sailor and explorer, this ‘High Admiral of the Ocean Sea’, with his reddish cheeks and his far-seeing stare, he really was two lateens short of a topmast. He thought he was going to convert all of India to his holy faith; now that all the Jews had been driven out of Spain, Columbus wanted to build on this great Christian achievement by winning more magnificent victories for the Blessed Cause.

‘My mission,’ he told me, with that messianic glint in his cold blue eyes that must have frightened Isabella at first, ‘my mission is to Christianise the Indians, bring enlightenment to the pagan.’

I tried to tell him we already had Christians in Kerala, converted by old Doubting Thomas the Apostle himself, Jesus’s disciple and traveller for the faith, well before Columbus’s own ancestors. ‘Malayalis,’ I said, ‘were worshipping the cross when your so-called civilised Europeans were still feeding Christians to the lions.’

He looked at me, almost cross-eyed in disbelief. Then he found his refutation in my own idolatry: if Keralites were Christians, why wasn’t I one?

I explained to him, patiently, that some Keralites were Christians, but most of us, perfectly satisfied with the ancient faith into which we had been born, were not.

(This story is excerpted from A Clutch of Indian Masterpieces: Extraordinary Short Stories from the 19th Century to the Present, edited by David Davidar,  to be published by Aleph Book Company in December 2014.)

‘I Am No Hardliner-Softliner, I Am A Pragmatist’