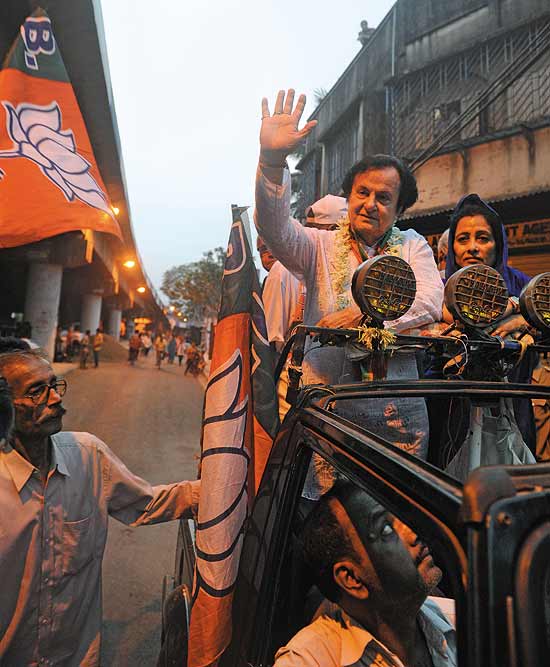 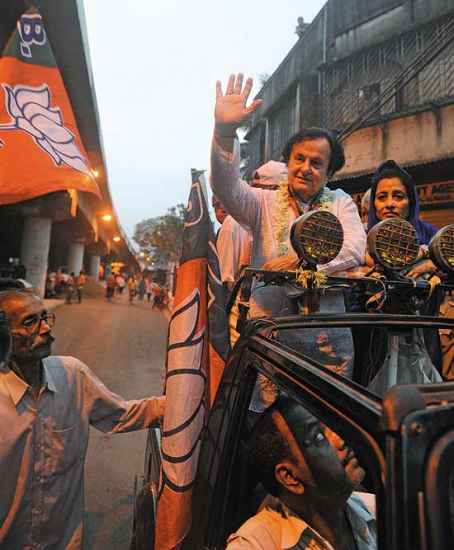 Evening is descending over the Hooghly—the lower Ganga that slices south through Bengal. Near the sea, on its eastern banks, lies Calcutta. On the opposite bank—across the iconic Howrah Bridge—lies How­rah, a congested township littered with abandoned factories and slums, where residential complexes coexist inharmoniously with ungainly commercial spaces. Large and densely populated, Howrah is an important seat. Actor George Baker, the BJP candidate for Howrah for the Lok Sabha polls, is making an earnest fight of it.

Like most days since his name first featured amongst the 17 BJP candidates from the state, the 68-year-old actor sets off early from his home in Cal­cutta’s Tollygunge. But nightfall doesn’t exactly mean pack-up time. “There are still a couple of rallies that he is scheduled to address,” says a party worker. A 500-strong crowd has gathered in Mandir Tala, on the road into Howrah straight from the new bridge, Vidya­sagar Setu. It includes interested listeners, curious bypassers, party workers and Baker’s many fans.

“Dada, edikey ektu dekhun. Amra apnar cinema dekhey boro hoyechi (Dada, do look this way. We grew up watching your films),” shouts a taxi driver waving frantically at Baker, who has begun walking from the podium to his campaign vehicle—an open jeep. Kept from running up to Baker by the swelling crowd in between, the cabbie is desperate for eye contact. Cars, buses, vans, cycles, rickshaws and trucks also find themselves stuck in a jam, but not many seem to be cribbing. “Ey toh legei aachhe. Vote-er shomoy to dhorei nite hobe jey ektu aadhtu jam hobe (This is nothing unusual during polls. We have to take such jams in our stride),” comments a rickshaw-puller sagely. The grumpy, middle-aged woman on his rickshaw, however, is not that forgiving. All she grumbles is, “I don’t know who the candidate is, nor do I know the party. Don’t even want to, just want to go home fast.”

But she clearly is the odd woman out in a crowd trying to map and gauge the potential of a prospective member of Parliament. “He seems respectable, polite, nice and it would be nice to have someone like him as our MP,” says Deepshikha Dhar, a homemaker. “I also find him to be quite handsome.” Tall, with a Caucasian skin tone and handsome features, the Assam-born George Baker acted in his first film when he was thirty. In his first major role in Chameli Memsaheb, Baker played a foreigner. “In fact, because of his looks he can only play a foreigner or an Anglo-Indian,” explains a Bengali movie industry insider. “But he is much in demand because in the Bengali industry there really aren’t any foreign actors of his age, so whenever there is such a role, it is offered to him.” Baker dislikes the term ‘Anglo-Indian’, and points out that both his Christian parents had Greek ancestry. So why did he enter politics? “Let me ask you. Why do you think anybody would want to join politics?” Baker lobs the question back. “Er...to serve the people?” we offer gamely.

That question, he says, is the right answer. We venture, gingerly, that like most beauty queens who inevitably name “Mother Teresa” as a role model while being in thrall of Bollywood, many of our politicians are really in it for the power and money. He chooses not to take the bait.

But there appears to be a sense of true commitment in Baker. When he talks, you realise he has deeply felt the problems plaguing the country. “I am troubled by the shameful economic discrepancy that exists between people in our country. And I realised I wanted to try and bring positive changes in society and in the system. The only way to do that would be to gain entry into the political and legislative system, where real changes are made.”

Baker joined the BJP a year back, but was a reluctant contestant. “When I joined as an active worker of the BJP, I’d pleaded with my bosses that I must not be asked to contest elections,” he tells us. “And initially when this candidacy was offered to me, I actually refused. But after colleagues and our party top brass in New Delhi requested me, even coming down in order to convince me, I agreed.” If he finally wins, he can be sure he’ll have quite a job on his hand.

With its image as an industrial wasteland, Howrah city is beset with a series of urban problems—water shortage, a faulty drainage system, congestion, terrible pollution and a range of sick industries. Baker wants to take these challenges head on. “If there is political will, I don’t know why these can’t be solved.” He is also touched by the love people have shown towards him. “It’s heart-warming to see the smiles on the faces of people. Many people in my constituency are so poor they can barely make ends meet, but they always greet you with a bright smile and look genuinely happy to see you.”

But why, one asks Baker, did he join the BJP—a party with close bonds with the RSS and the Sangh parivar, which have been involved in the persecution of minorities, including of Christians in Orissa. Baker only points out in response that the Indian state with the highest Christian population—Goa—also has a BJP government.

The campaign trail usually ends at the BJP party office near Howrah Mai­dan, on a road that houses both CPI(M) and Trinamool party offices. The TMC candidate, footballer Prasun Banerjee, is a strong contender. But a quietly confident Baker doesn’t harbour any doubts about his chances. “We are hopeful of winning Howrah,” he says simply. In fact, contrary to projections that the BJP will get only the Darjeeling seat in Bengal, Baker believes that it may get as many as nine seats.

As he speaks on about politics, his constituency and his party, Baker betrays no sign of exhaustion from the incessant campaigning, day after tiresome day, under the harshest summer sun all these weeks. But his wife, Bengali actress Arpita Mukherjee, reminds him that it’s time to go. “It’s nearly nine and you have to get up early tomorrow,” she chides him. Arpita is Baker’s second wife. He is divorced from his first wife, with whom he has two sons, and who live in Assam. Arpita is concerned about the effect the sun has had on her complexion during campaigning with her husband. “I’m getting a dark tan!” she says. Baker, with his European pelt, doesn’t share that concern. It’s dark as the entourage makes its way back across the Hooghly to Calcutta. From atop the bridge the lights of the great metropolis stretch out like endless constellations. But Baker’s mind is not off his mission. His talk turns to the need for electrification in some Howrah villages.