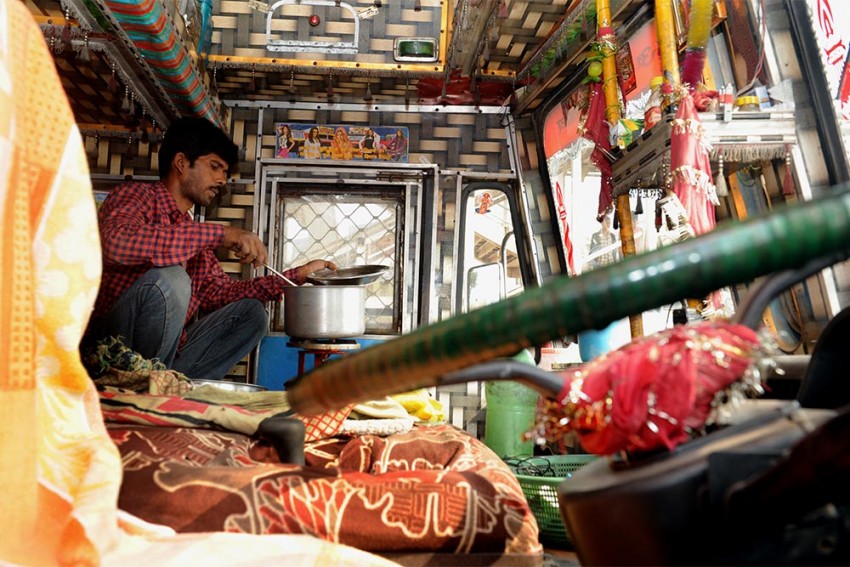 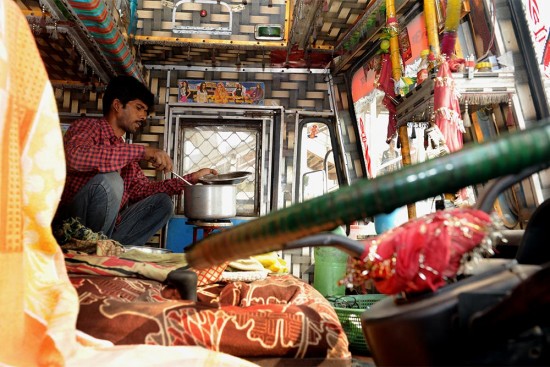 It’s a long stretch of road that takes you from Srinagar to New Delhi. The highways are winding at times and bouncing around while helming a truck around them isn’t exactly a joy ride. Mudassir Bhat, all of 25, has been doing it for six years now in one of those rickety ten-wheeled trucks seen plying long distances across the country, leaving those behind them covered in soot and staring at a ‘Horn OK Please’.

With wheels close to four feet in height, it’s almost a wonder how Bhat’s khalasi, a boy of 20, gets in to be seated beside him. The truckers’ haven is a cozy cabin, which has been modified to house two persons. The backrests have been done away with, replaced by another seat at the back, and together they add to something just short of a queen-size-bed, which Bhat and his helper can fit into. There is a crate behind the driver’s position which houses two worn-out pressure cookers, vegetables, oil, spices, tea and anything else they may need to get through the night.

“Our day begins with chai that the khal­asi makes after the night-halt,” says Bhat, lighting a Four-Square cigarette. A Quran-e-Sharif adorns his dashboard, as do num­erous steel tumblers, hand-towels and an ashtray right at the centre of it all for easy access to the duo. Contrary to the perception that people have of unruly/drunk truckers out to knock them off the road, Bhat is clearly not the ‘aggressor’. “We rarely get out from the cabin. We sleep in here and eat here. We feel it’s safer inside than outside,” he says. Aside from a general dread of being robbed, it’s more of a cultural thing, he explains. “We Kashmiris only like to eat rice and not rotis,” he says, adding that they “do not go to the hotels”, only for tea perhaps. Even that happens on occ­asions when the milk has run out or either of them is too tired from the bone-shattering experience to cobble a cup together.

Bhat left on Sunday morning from Srinagar and was in Delhi 40 hours ­later­, with a bit of a sore back. The halts en route come at Jammu, Panipat, Karnal and ­finally Delhi. Bhat has a few choice words for the capital. It makes you wait the longest, he says, since trucks are only ­allowed to ply late at night. “Coming into Delhi is a bit of a pain. The cops try and pinch money off you whenever they can,” he says, smirking at first and then going into a bit of a rant about it.

“We make about three of these trips every month,” he says. He makes about Rs 80,000 from one such two-way trip out of which he keeps only Rs 15,000. “The rest goes to the owner of the truck,” he says wistfully, He dreams of owning a monster like this someday and not having his dues taken away from him.

The Azadpur Mandi in Lal Bagh is not exactly a hub of activity post-lunch. There are crates teeming with oranges, another fruit that brings Bhat to these parts. “It’s the apple-season. And people here really want some from Kashmir,” he smiles. On his way back to Kashmir, the 15-tonne load at the back of his truck will be ­oranges for the Valley. It’s to-and-fro on repeat at this time of the year for him. In summers he rides all the way to Agartala in Trip­ura. “It’s because we cannot go any further I guess,” he winks. There are pictures of landscapes at the back of his cabin from across the north.  “It’s a beautiful country, isn’t it?” he asks.

Notes From My Skoda