The chairman isn’t exiting. Taking a pacifist line, R. Seshasayee has reached out to NR. 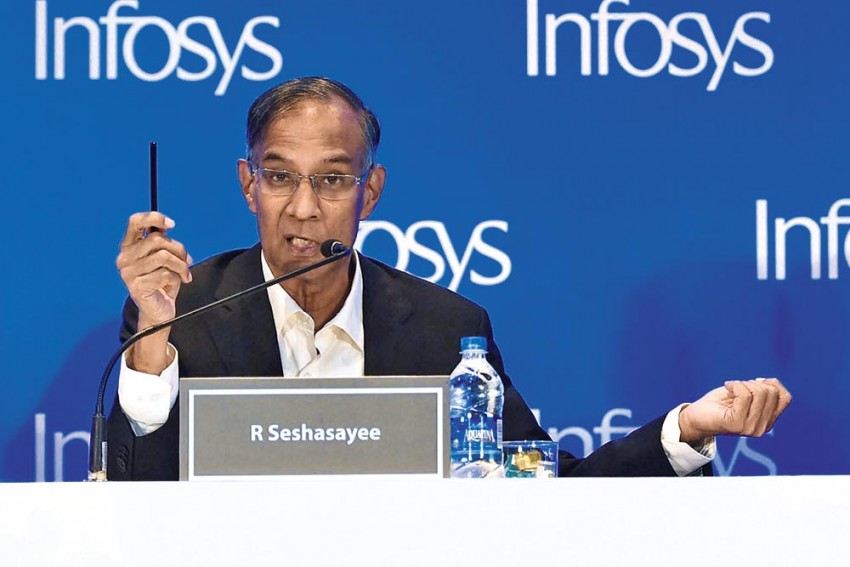 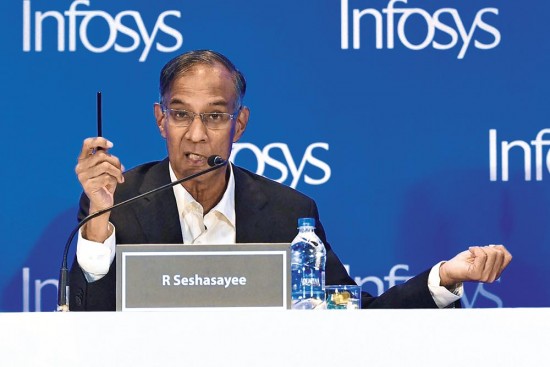 “Don’t look at this as a battle,” was what Infosys Chairman R. Sesha­sayee repeated several times during a marathon press conference the other day at Mumbai airport’s Taj Santacruz. The situation was indeed unusual: the Board having to clarify on issues that were seemingly smouldering for months until N.R. Narayana Murthy spoke his mind in a newspaper interview.

Seshasayee, 68, is no stranger to Infosys: he was an independent director for four years before ste­pping in as the non-executive chairman in June 2015. He has known Murthy for three decades, and in the middle of this fortnight’s flare-up, the Infosys founder told an interviewer that Seshasayee was a man of highest integrity. Yet, the auto industry veteran is leading the Infosys board when it has no founders or those managing operations in the company. The board, except for a couple of members, comprises people fairly new to Infosys.

“Here we have some stakeholders with nothing other than the best interest of the organisation in their mind…lot of passion, yes,” said Seshasa­yee. “We are a bunch of professionals with no interests other than discharging our duties to the best of our abilities for the best interests of the company. There is no conflict but convergence of interests.”

Cultural changes will be natural, but the new CEO hasn’t gone off Infosys’s basic framework of fundamental values, notes Seshasayee.

A chartered accountant, Seshasayee, or Sesh as he’s known among peers, joined Ashok Leyland in 1976 after a stint with HLL. Over a 40-year car­eer at the truck-maker, he rose to become its vice chairman—a position he held until July 2016. Infosys, he’s said earlier, is a unique company because in India, other than the banks, “you do not have companies of large size with a professional board, professional management and a vast number of shareholders”. While it’s natural that there would be cultural changes, he reckons the company, under his watch, hasn’t swerved from the framework of fundamental values. “But I have no hesitat­ion in saying the cultural milieu is different, and therefore there will be differences on perceptions on this,” he told reporters on February 14.

When the Bhishmapitamaha—as Vis­hal Sikka once likened Murthy to—raised concerns of weakening corporate governance, it was Seshasayee’s response that was keenly sought. For the present, given the support of the board, he doesn’t intend to step down. “Shareholders have elected me to do a job, the Board has asked me to do a job. So long as the board doesn’t say that you haven’t done the job and go home, I have to do the job and I will do the job,” he said. However, Seshasayee did reach out to Murthy. He later told investors that both agreed “that we should not have these kinds of interactions taking place through the media”.

Shriram Subramanian of the proxy advisory firm InGovern reckons all this would serve as an alert for the board. “It’s also a wake-up lesson for the founders to not air their views through the media,” he says. “Obviously, they (board) haven’t answered exactly what happens to Rajiv Bansal’s suspended (severance) package, and why he was paid is still not clear. We don’t exactly know the angst of Mr Murthy and whether those concerns are  shared by other founders because they have not made any letter public,” he says. “If, for exa­mple, I compare the same situation with what happened with Elliott Management sending a letter to the Cognizant board, I know exactly, sitting here, the concerns and remedial actions they are suggesting.” Still, he says, it’s a pointer to the Board of Infosys that they are going to be under increasing scrutiny.

Seshasayee says dwelling too much on issues that don’t add value could be distracting. “We live in a glasshouse, but don’t stare too long.”

Obverse Of The Coin...