"Tribals Are Returning To Congress"

'It only proves what we have been saying from the beginning—the culprits can't be booked as long as Narendra Modi is in power.' 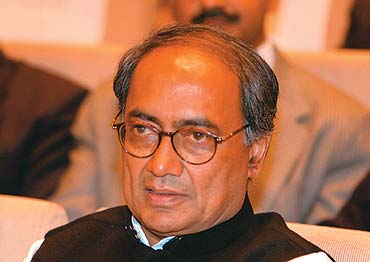 outlookindia.com
-0001-11-30T00:00:00+0553
When he was Madhya Pradesh CM, Digvijay Singh ensured the pogrom against Muslims by tribals in neighbouring Gujarat did not spill over into his state. Today, as party general secretary, he is one of the lead campaigners for the Congress in the assembly elections in Gujarat next month. Excerpts from an interview to Outlook:

What does the recent Tehelka investigation into the '02 riots prove?

It only proves what we have been saying from the beginning—the culprits can't be booked as long as Narendra Modi is in power. The Nanavati-Shah commission (probing the riots) appears to be thoroughly compromised as per the statement of Gujarat's ex-advocate general in the Tehelka tapes.

Is there a feeling that highlighting the riots in the election campaign will further polarise Gujarati society, help Modi consolidate the Hindu vote?

In the last elections, Modi did well not just in the urban centres, but also in the tribal belt—a traditional Congress stronghold. Can the Congress regain ground there?

Modi's strategy was to bring tribals into the forefront of the confrontation against the Muslims. Consequently, in those areas they (tribals) were arrested and cases were registered against them. No VHP leader was named in the FIRs even though all the planning was done by them. Then Modi told the tribals that if the Congress comes to power, they'd languish in jail. But what happened? They're still in jail—he just forgot about them. The tribals have realised this and are returning to the Congress.

The Congress has been trying to forge an understanding with BJP dissidents. Post-Tehelka, will you distance yourself from them?