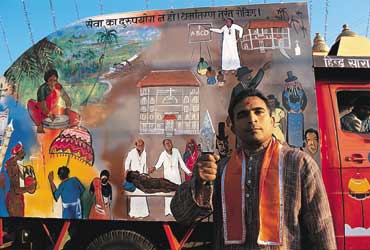 outlookindia.com
-0001-11-30T00:00:00+0553
The twin trumpcards of terrorism and the tribal vote did the trick for Narendra Modi in Gujarat. While the former was a wave that swept across the state, the tribal voters in central Gujarat, traditionally committed to the Congress, shifted their allegiance totally to the BJP. This level of saffronisation was unthinkable a few years ago. But the work put in by Sangh organisations like the Vanvasi Kalyan Parishad paid off in the communally charged post-Godhra scenario. The upshot: the BJP swept the tribal districts of Panchmahals, Dahod and Vadodra, winning all the 25 seats.

In retrospect, Congress leaders admit they had taken the tribal vote for granted. The local Congress MLAs, who had been winning election after election unchallenged and had been lulled into complacency, could neither see what was happening nor did they appear to be concerned. Even after Sangh organisations took root in tribal belts, the Congress did little to counter them. When evidence of the large-scale polarisation was staring them in the face during the riots, Congressmen refused to see the writing on the wall. The Vishwa Hindu Parishad (VHP) exploited to its advantage a huge force of unemployed—and in many cases, unemployable—tribals. Says Ganesh Devy, a Vadodra-based social science researcher, "Because they had nothing else to do, they were available for political recruitment, and thus 'empowerment'."

The tribal areas of central Gujarat have remained extremely backward and have a high level of unemployment. According to Devy, of the 70 lakh tribal population, more than 12 lakh migrate every year to different parts of Gujarat and to neighbouring states in search of jobs. The economic deprivation was exploited during the riots and tribals were given a free hand to loot Muslim shops and establishments. Points out Indukumar Jani, social scientist and president of Janpath, a conglomerate of ngos, "The tribals were allowed to loot and burn shops and were promised that the police would look the other way. That was it. You politically empower them, provide them country liquor and allow them to loot. The tiger tasted blood and went on a rampage."

However, all this did not happen overnight. The groundwork began a few years earlier and the experiment was put to test during the riots and then the elections. Explains Devy, "The VHP's penetration in the tribal areas started in the late '90s. Slowly but steadily, the parishad was splitting tribals into Christians and Hindus. It also started creating its own bodies like the Vanvasi Kalyan Parishad to counter the work of Christian missionaries." This was at one level. At another, several local religious sects and sants were encouraged to become active in tribal regions. Many now have large followings in the tribal belts of central Gujarat.

Although the sects and their gurus talk about social and spiritual reforms as well as impart teachings from the Bhagwad Gita, they are also goodwill ambassadors for the VHP. By encouraging them and promising them security, the VHP won over the heads of these sects. According to social workers, these gurus are not part of the VHP's aggressive Hindutva campaign and have nothing to do with the violence. But during the elections, the VHP prevailed upon them to appeal to the people to counter the pre-poll 'fatwa' to Muslims to vote Congress. This seems to have worked. Such is the following of the sects, headed by sants such as Asaram Bapu and Jayshree Talwalkar (better known as Didi), that even a word from them can swing voters.

How carefully the Sangh parivar had planned to woo the Dalit votes is evident from the fact that in mid-November, a three-day meet of the devotees of Dada Bhagwan was held in Godhra. The meet had visible political overtones.Admits a BJP leader, "While the meet created a spiritually pro-Hindu atmosphere, the devotees were directly as well as indirectly approached with the appeal to vote only for the BJP." This was followed up by a massive congregation of devotees of Didi at the same venue a week before Gujarat went to the polls on December 12. While the Congress was completely outwitted by this kind of campaigning, the party has to shoulder a large part of the blame for the BJP's victory. Points out Devy, "The Congress was completely complacent, believing that their monopoly over the tribal region was intact. They wrongly believed that Hindutva doesn't work with tribals."

According to human rights activist Father Cedric Prakash, the Congress could do little because many of their own leaders were also playing the communal card. Says he, "Earlier, during the riots, the BJP-VHP combine used the tribals for arson and looting and thus exploited their poverty. The Congress couldn't do much because I believe some of the local Congress functionaries were also communalised and encouraged tribals to loot and burn."

Also, the 'Hindu-Muslim bhai-bhai' card played by senior Congress leaders had no resonance. Several of the tribals had not quite forgotten the riots in which they participated alongside Bajrang Dal activists. Many see the minority community as a threat. Social workers believe that it will be years before the divide between Muslims and the tribals is bridged. Moreover, many tribal youths point out that they have benefited materially by joining hands with the Sangh parivar. Says Jani, "It was not a positive religious vote for the BJP. The failure of the Congress to address the economic problems of the tribals was exploited to the hilt."

To make things easier for the BJP, the Congress was also guilty of nepotism and favouritism when it came to distribution of tickets in central Gujarat. Sons, daughters and sons-in-law of party leaders were favoured above leaders with proven track records. From the 12 such relatives of leaders fielded, nine lost. For instance, in Dahod, the daughter and son-in-law of former Congress MP Somji Damor were given tickets despite stiff resistance from the local party unit. Both lost in what were once safe Congress seats.

Unlike its rout in central Gujarat, the Congress maintained its dominance over the 26 tribal-dominated seats in Bharuch, Surat, Navsari, Valsad and Dangs districts in south Gujarat. The party won 19 seats here. Of the other seven, two went to the Janata Dal (U) and five to the BJP. These were districts which were unaffected by the riots. However, Fr Cedric feels if the Congress remains complacent in south Gujarat, it might have to face electoral losses in the long run. According to him, the VHP has made firm inroads into the tribal areas and is expanding its base. The parishad's campaign will gather further steam now that their chief patron, Modi, is back in the driver's seat for a five-year term as chief minister, with a two-thirds majority.