The Tehelka tapes flood the countryside as part of poll rhetoric 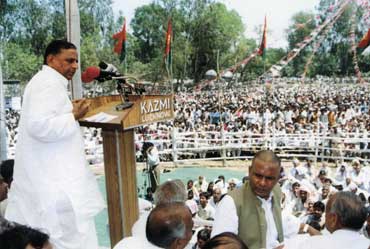 outlookindia.com
-0001-11-30T00:00:00+0553
The Congress knows what it is like to be at the receiving end of a defence scam. And that's precisely why it is no mood to let go of the opportunity that the Tehelka tapes have presented to it on a platter. At Bangalore's plenary session, Sonia Gandhi sounded the bugle and party general secretary Oscar Fernandes immediately shot off a note to all pcc presidents and legislative party leaders: "The issue has to be fought both inside and outside Parliament. The agitation has to be protracted and well-planned as the bjp is doing everything possible to cling to power."

Oscar went further in fleshing out the strategy: "Where we are in the Opposition, the matter should be raised in the assemblies through agitation and where we are in government, resolutions could be passed in the assemblies." With the approval coming from the very top, the vast Congress machinery has swung into action. In Madhya Pradesh, chief minister Digvijay Singh has placed a preliminary order of 500 tapes which will be taken to the interiors to show the perfidy of the bjp-led Union government, while in Rajasthan his counterpart Ashok Gehlot has asked middle-level party workers to plan a similar move.

Party sources say leaders at all levels have been given talking points and an edited copy of the Tehelka tape, highlighting the Bangaru Laxman and the Jaya Jaitly episodes, and the conversation about Ranjan Bhattacharya and Brajesh Mishra. Approximately 10,000 such tapes have been distributed throughout the country and these have been used at the block, district and state levels, including local cable channels. Says Congress spokesman S. Jaipal Reddy: "The campaign is on. We've held rallies at all state headquarters." That apart, the reluctance of certain nda members to go the whole hog in support of their principal ally, the bjp, is, in Reddy's opinion, also a boost for the Congress. Says he: "Chandrababu Naidu stayed away from the rally at Hyderabad last Wednesday so the PM had to cancel his visit. Similarly, Hegde did not attend the Bangalore rally. This embarrassment helps us."

CWC member Ahmed Patel is coordinating this Congress campaign. Says Reddy: "The Congress strategy is one of slow-bleed. We don't want to kill the issue in a day." According to Congress strategists, the picture of Bangaru Laxman accepting bribes has to be followed by an attack on the PM. "It's not enough to say 'Bangaru chor hai', as not many people know him. So, we show that shot and follow it up with 'gali gali mein shor hai, Atal Behari chor hai'," says one.

However, it's not the Congress alone which is banking on Tehelka. Other Opposition parties have also seized the tapes with some gusto. In election-bound Tamil Nadu, aiadmk supremo Jayalalitha couldn't have asked for more. Under pressure over a slew of corruption cases over the past few years, Tehelka has probably turned the situation around for her. Says an aiadmk member, referring to her pulling down of the last Vajpayee government: "Amma gave up power to fight corruption. Today she stands vindicated. The nda has compromised on defence. They now can't find fault with some mistakes which may have occurred during Amma's rule." All this has put the dmk on the backfoot. Admits a dmk leader: "Whenever we talk of Jaya's corruption, the Opposition comes back to us with Tehelka. We can neither defend nor abandon the bjp."

In distant Assam too, where elections are due, the state Congress is distributing the tapes in the bjp strongholds of Upper Assam and Barak valley.Says Congress MP from Dibrugarh Pawan Singh Ghatowar: "All along, the bjp was talking about a clean, honest and transparent government. The Tehelka tapes will reveal how hollow these claims are." Party treasurer Mani Kumar Subba has already been asked to make funds available for the project.

Ditto in UP's Haidergarh. This obscure town offered itself as a safe bet for CM Rajnath Singh as one of its contestants, until armsgate. Says a disgusted 80-year-old Hari Ram of village Chowbeesi: "I'm angry with the bjp leaders. They cheated us and we saw it all on the television."

Clearly, the bjp and its allies will have a lot of explaining to do, something that they have always demanded from the Congress in the past. The only difference this time around, and a significant one at that, is they have the corruption on tape.

In The Spirit Of Crazy Horse